People are seen holding a Lebanese flag along with a picture of the leader of Hezbollah, Sheik Hassan Nasrallah in Beirut in 2006.
Photo by Spencer Platt/Getty Images

The question of whether companies can be held liable for even indirectly doing business with terrorists has been answered differently from court to court, despite Congress’s efforts to spell out terror victims’ right to sue.

Two cases making a bid for the U.S. Supreme Court could change that.

The high court could decide as early as May whether to hear Strauss v. Credit Lyonnais and Weiss v. National Westminster Bank in what would be its first test of the 2016 Justice Against Sponsors of Terror Act (JASTA), the only law passed over a presidential veto during President Barack Obama’s time in office.

“Banks lose those cases, then they could end up with hundreds of millions or billions of dollars in liability,” said Peter Margulies, a professor of law at Roger Williams University. “They would have to look over their shoulder in a lot of different transactions.”

Lower courts have issued a series of conflicting rulings about the law, including decisions within the Second Circuit Court of Appeals favoring both sides. Most lawyers for both terror victims and companies agree that some courts are out of step with Congress’s intent.

“If the Supreme Court grants cert, it may be a signal that at least four justices don’t like the way the case law has developed in that circuit,” said Andrey Spektor, a partner with Bryan Cave Leighton Paisner LLP in New York.

Two other cases working their way through federal courts, against and pharmaceutical giant , don’t rely on JASTA. They illustrate different legal pathways for victims to seek justice via litigation while raising questions about the degrees of separation between companies, terror groups, layers of intermediaries and financial transactions.

Levin v. Wells Fargo leans on the Terrorism Risk Insurance Act, which says that a person who wins a judgment against a terrorist state or entity can be compensated from funds that a bank has blocked and frozen (as required by law) because they were linked to the same terrorist group. In Atchley v. AstraZeneca, American civilians and service members who were wounded by terrorist attacks in Iraq are suing 21 drug and device companies that they accuse of selling medicine and supplies and engaging in bribes and other corrupt transactions with the country’s health ministry, which was controlled by the same Hezbollah-linked militant group that allegedly harmed them.

The D.C. Circuit Court of Appeals will hear oral arguments Tuesday in the Wells Fargo case and could affirm a prior opinion holding that the party that originates an electronic funds transfer has an “interest” in the funds. That would mean that victims harmed by that originator have a claim to that money. If the D.C. court upholds its position, it would establish a clear circuit split on the issue, making it more likely that the case could also get before the Supreme Court.

Congress’s intention, as laid out in JASTA, was to “provide civil litigants with the broadest possible basis” to sue “persons, entities, and foreign countries” that have “provided material support, directly or indirectly to foreign organizations or persons that engage in terrorist activities.”

Plaintiffs must prove that the defendants were “generally aware” they were playing a role with terror organizations at the time an injury occurred, and then went on to knowingly provide “substantial assistance” to those groups.

Pro-plaintiff lawyers say some federal courts - particularly in the Second Circuit - are disallowing claims against companies and financial institutions that didn’t deal directly with a terrorist organization.

In Strauss, the court held that even though the plaintiffs could prove Credit Lyonnais knowingly provided support to Hamas, they didn’t also prove that the bank knew it was playing a role that could lead to violence, which many lawyers say is a higher standard than required by JASTA.

“The result has been jurisprudence that cannot be reconciled with the statute’s plain text and Congress’s unambiguous intent; and it has led to decisions that effectively create a loophole that would all but swallow JASTA whole,” according to an amicus brief in Weiss filed on behalf of 17 law professors, including Margulies, in support of the plaintiffs.

Lawyers who represent the companies - often banks - point to opinions with broad interpretations of what constitutes substantial assistance, and what the institutions were generally aware of at the time of the transactions. JASTA requires more stringent proof of a company’s explicit knowledge and aid to terrorists, according to an amicus brief filed by the Institute of International Bankers, the American Bankers Association, the European Banking Federation and the U.S. Chamber of Commerce.

“Were Plaintiffs’ views adopted, a financial institution could be held liable for engaging in inappropriate transactions—not with FTOs [Foreign Terrorist Organizations] or terrorists carrying out their plans, but instead with foreign states and other banks that supported still other organizations and entities that themselves may have separately assisted or conspired with FTOs or terrorist attackers,” according to the brief. 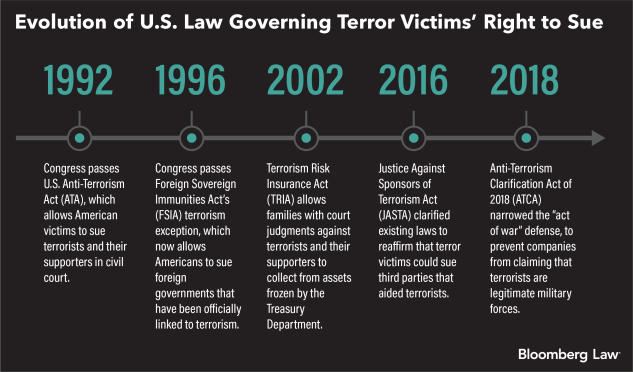 The U.S. Anti-Terrorism Act (ATA), passed in 1992, allows American victims to directly sue terrorists and their supporters in federal court. However, it didn’t allow suits against sovereign nations or their agencies, which has limited its usefulness for victims of terrorist acts, said Suzelle Smith, partner and co-founder of the Los Angeles law firm Howarth & Smith.

Congress followed that up in 1996 with the Foreign Sovereign Immunities Act’s terrorism exception, which allowed suits against employees of foreign states who committed terrorist acts but not the states themselves. However, FSIA did little to support collection actions, according to a 2008 report by the Congressional Research Service.

Congress went on to pass the Terrorism Risk Insurance Act (TRIA) in 2002, which was designed to help victims who had obtained court judgments to collect them. In 2016, JASTA amended two previous laws to affirm that terrorist victims can sue entities that knowingly aid and abet terrorists or even those who conspire with the parties “who committed such an act of international terrorism.”

Lawyers for financial institutions and other companies in these cases have argued that JASTA only applies if the banks and the terrorists “shared a common unlawful objective.”

In one key ruling favorable to terror victims, a three-judge panel at the Second Circuit in 2019 found that a Manhattan federal judge had used higher standards than required by JASTA when he dismissed a lawsuit brought by victims of Hezbollah rocket attacks against Lebanese Canadian Bank. The lower court had found in favor of the bank based on the premise that JASTA required showing that the third party knowingly provided substantial assistance.

The appellate court said plaintiffs only need to prove that the defendant gave substantial assistance - even to an intermediary of a terrorist organization - and was “generally aware” it could be contributing to terrorist attacks.

That ruling “goes a long way toward doing what Congress actually intended,” said Steve Vladek, a professor at University of Texas School of Law.

In Levin v. Wells Fargo, the plaintiffs won judgments against Iran but found it impossible to collect. They want Wells Fargo to release frozen funds from Iran to fulfill those judgments.

“This is a very important case,” said Smith, the lead attorney in Levin. “If the D.C. Circuit overrules the trial judge and holds that the blocked funds held by Wells Fargo are available to the Levins, then, in DC, all such funds would be available to all victims of Iranian terrorism. However, most of the blocked funds are in New York banks. So if we win Levin, the issue really needs to be decided by SCOTUS.”

Separately, in Atchley v. AstraZeneca, a number of American civilians and service members who were wounded by terrorist attacks in Iraq claim AstraZeneca, Pfizer and Johnson & Johnson, along with 18 other drug and medical device companies, are liable because they allegedly did business with and made corrupt payments to the Jaysh al-Mahdi-controlled Iraqi Ministry of Health.

The U.S. District Court for the District of Columbia dismissed the case in 2020, finding that the plaintiffs failed to allege liability under the Anti-Terrorism Act (ATA). But the D.C. Circuit unanimously reversed the dismissal in January.

The Supreme Court won’t decide on taking the Credit Lyonnais and National Westminster cases until the U.S. Solicitor General weighs in on them.

But many lawyers will be watching, because any time the high court grants cert in a case that hinges on statutory interpretation, “it has an immediate, direct impact on all the cases that invoke those statutes—existing litigation, contemplated litigation, and cases on appeal,” Spektor said.

“Any serious global business should already be checking to see if their customers have been designated as terrorist organizations,” Spektor said. “The fight here is over how much further they have to go.”

“If the bank reports any suspicions to the authorities and gets a green light, could they still be exposed to civil liability?” he added. “If diligence reveals no apparent direct link between a customer and the terrorist organization, must the bank probe further? If the answers to the questions are ‘yes,’ then some institutions may choose to simply de-risk and exit certain markets.”