President Donald Trump listens as Governor Kevin Stitt (R-OK) speaks during a roundtable at the State Dining Room of the White House June 18, 2020 in Washington.
(Photo by Alex Wong/Getty Images)

Supreme Court Justice Amy Coney Barrett said recently that she and her colleagues aren’t “a bunch of partisan hacks.”

The state of Oklahoma is testing that notion, at least in the eyes of American Indian tribes.

Governor Kevin Stitt (R) wants the court to reverse 2020’s McGirt v. Oklahoma, the 5-4 ruling hailed by tribes as a long-overdue endorsement of their sovereignty in much of the eastern part of the state., in his majority opinion, was unmoved by the state’s warnings of public-safety disaster if the court ruled as it did.

Doubling down on those warnings, Stitt earlier this year cited Barrett’s replacement of the late Ruth Bader Ginsburg, who ruled against Oklahoma, as giving the state a chance in its long-shot appeal as it presses over 30 petitions asking the court to change its mind. The justices will consider Oklahoma’s petitions as the court faces historic-low public approval and progressives call for court-packing while the Republican-appointed majority considers overruling longstanding abortion precedents.

“Their petitions are somewhat remarkable in that they’re a naked grab for a do-over with the court,” said Stephen Greetham, senior counsel for the Chickasaw Nation, which in its amicus brief called out the governor’s “cynical reliance on the Court’s recent change in composition” to overturn the precedent.

State officials remind the justices that they don’t always follow their prior rulings, citing a 2019 case that tossed a longstanding decision and led Justice Stephen Breyer in his 5-4 dissent to “wonder which cases the Court will overrule next.” Lawyers for Oklahoma also cite 1991’s Payne v. Tennessee, in which a newly composed court overruled recent decisions on capital-case evidence, while Justice Thurgood Marshall began his dissent by saying, “Power, not reason, is the new currency of this Court’s decisionmaking.”

Reversing course just a year after McGirt “would be a very dangerous precedent to set that would drastically undermine the court’s authority,” said Mary Kathryn Nagle, who filed an amicus brief in McGirt on behalf of the National Indigenous Women’s Resource Center, tribal nations, and other groups.

“I would be surprised if the court was willing to do it,” she said, “just like the court wasn’t willing to go back and reconsider Brown v. Board of Education just because governors in the south refused to desegregate.”

McGirt is a criminal case in which the defendant challenged the state’s authority to prosecute crimes involving Indians on Indian land. That raised the question whether the land is still a reservation or subject to state jurisdiction.

The decision led to court recognition of all Five Tribes’ reservations in eastern Oklahoma—the Cherokee, Chickasaw, Choctaw, and Seminole as well as the Creek. On Oct. 21, the Oklahoma Court of Criminal Appeals added a sixth tribe, the Quapaw Nation, to the reservations on which the state lacks jurisdiction. “Oklahoma is literally being torn into pieces,” Stitt said after the latest ruling. 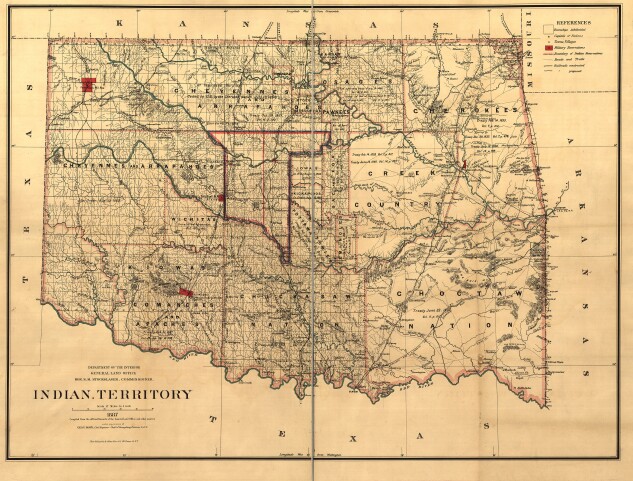 This 1887 illustration of Indian Territory in Oklahoma was produced by the Department of the Interior, General Land Office.
(Photo by: Glasshouse Vintage/Universal History Archive/Universal Images Group via Getty Images)

Ahead of McGirt, state officials warned that federal and tribal caseloads would increase as a result of the state losing jurisdiction over the reservations and state prisoners challenging their convictions. They warned of civil consequences as well for tax and regulatory authority. Officials echo those claims in their attempt to overturn the new precedent at the new court.

“McGirt has pitched Oklahoma’s criminal-justice system into a state of emergency,” the state said in its main petition pending at the court, Oklahoma v. Castro-Huerta. Lead counsel for the state is veteran high-court lawyer Kannon Shanmugam, head of the Supreme Court practice at Paul, Weiss in Washington.

“One of the most basic functions of a state is the ability to enforce the rule of law and today Oklahoma does not have that ability in half the state,” Atchison said.

“They want to say this would not have happened but for McGirt, but the facts simply don’t support that reading of the situation,” Hill said.

Stitt spokesperson Atchison said it’s “not an issue of Kevin Stitt versus the tribes, it is an issue of the fundamental sovereignty of a state in the United States of America.” In Oklahoma’s legal filings and in public comments, Stitt has blamed tribes for not cooperating with state officials in the wake of McGirt.

But lawyers for tribes working to implement the ruling say that, if anything, it’s Stitt’s fixation with overturning it that hampers progress.

Stitt has called the case the most pressing issue for Oklahoma but only 23% of Oklahoma registered voters agree with that assertion, according to polling.

“McGirt works,” said Kyle Haskins, first assistant attorney general for the Creek Nation. “We spend our time focused on implementing the rule of law as established by McGirt and meeting our responsibilities to the public, and at the same time we spend hundreds of hours and many thousands of dollars fighting the constant barrage of legal challenges filed by the state.”