was on the shortlist for a seat on the U.S. Supreme Court even before President selected her on Tuesday to be a federal appellate judge -- a job that would only enhance her credentials for promotion.

As a district court judge in Washington, D.C., Jackson met with President five years ago when he was evaluating candidates for the vacancy left by the death of conservative Justice . Obama ultimately selected Judge , but Senate Republicans refused to consider the nomination.

Now Jackson, 50, is poised to join the Washington appeals court that Garland left in March to become U.S. attorney general. And if 82-year-old Justice retires during Biden’s term, the Harvard-trained Jackson would be a leading candidate for the Supreme Court, where she worked more than two decades ago as Breyer’s law clerk. 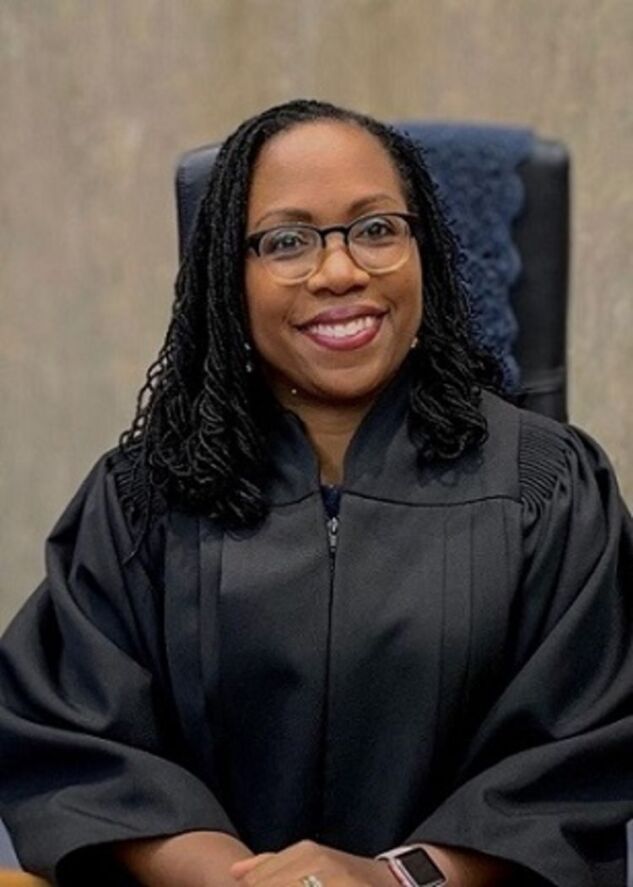 Jackson combines a powerful resume with the potential to fill long-standing gaps at the Supreme Court. She would fulfill Biden’s promise to nominate the first Black woman to the court. And she’d bring an unusual set of professional experiences, including a background as a public defender and a record of work on disparities in criminal punishment.

“That’s an asset,” said , a New York University law professor who worked with Jackson on the . “We just haven’t had people with that experience on there.”

Jackson was one of three Black women for appeals court seats Tuesday as part of Biden’s first crop of judicial nominees. The group also includes also includes , who would be the first Muslim-American federal judge in U.S. history.

Some conservatives remain wary of Jackson, who has weighed in on some of the most contentious legal issues of the Trump era.

“She was among a group of federal district court judges that seemed to view themselves as part of the Trump resistance as they ruled against the administration on challenges to executive orders and agency rules,” said , president of the Committee for Justice. He said he would “hold off on any judgment about her fitness for the high court until I see her record and the quality of her opinions” on the appeals court.

The judge grew up in Miami, where her father worked as a lawyer for the county school board and her mother was the principal of a magnet school. She attended Harvard University and Harvard Law School. Jackson then secured a prestigious clerkship with Breyer, a pragmatist and consensus-builder on the Supreme Court’s liberal wing, working for him in the court’s 1999-2000 term.

Years later, during hearings on Jackson’s nomination to be a federal judge, an Obama vetting committee quoted Breyer describing his former law clerk as “brilliant. She is a mix of common sense, thoughtfulness. She is decent. She is very smart and has the mix of skills and experience we need on the bench.”

Early in her career, Jackson worked for , a corporate law firm in Boston, but struggled to balance the intense schedule with the pressures of parenting her young daughter.

“Like so many women who enter Big Law, I soon found it extremely challenging,” she said in a 2017 speech at the University of Georgia. “You start to feel as though the demands of the billable hour are constantly in conflict with the needs of your children and your family responsibilities.”

In 2003, she became an assistant special counsel at the sentencing commission, which develops guidelines for federal courts. Two years later, Jackson joined the appellate division of the federal public defender’s office in Washington, where she won an unlikely victory in a complex tax case involving documents the defendant had produced under a grant of immunity. At oral arguments, Jackson “did an incredible job of explaining it in a way that made it comprehensible,” said A.J. Kramer, who runs the public defender’s office.

Obama nominated Jackson for a seat on the sentencing commission in 2009. While she was eventually confirmed, the vetting process lasted for more than six months.

“I actually taught myself to knit as a way to channel my nervous energy,” she said in the 2017 speech.

Jackson endured an even more stressful wait for confirmation after her next appointment. In September 2012, Obama nominated her for the U.S. District Court in Washington. But with the presidential election just weeks away, the Senate adjourned without considering her.

That raised the prospect that Jackson could lose a lifetime appointment to the federal bench if Obama was defeated by Republican nominee and his running mate, former House Speaker . The election was unusually personal for Jackson: Ryan’s sister is married to the twin brother of Jackson’s husband, a Washington surgeon.

“I was unusually jumpy,” Jackson said in the 2017 speech, “and started so many scarves that I could’ve outfitted a small army.”

Obama won a second term, and the Senate, in a voice vote, confirmed her to the federal bench in March 2013.

In Jackson’s most prominent case, she ruled in 2019 that former White House counsel had to testify at a House impeachment hearing, despite the objection of then-President . The case is now on appeal at the D.C. Circuit.

“Presidents are not kings,” she in a 120-page ruling. “In this land of liberty, it is indisputable that current and former employees of the White House work for the people of the United States, and that they take an oath to protect and defend the Constitution of the United States.”

Jackson also ruled against the Trump administration when she blocked a regulation aimed at speeding up deportations, though her decision was reversed on appeal. She prevented Trump’s Health and Human Services Department from terminating grants to groups that work to reduce teen pregnancies. And she partially the AFL-CIO in a case over new National Labor Relations Board rules governing union elections.

But Jackson sided with Trump in 2019, when she said environmental groups couldn’t challenge construction of the president’s border wall. The Supreme Court to review that ruling.

Throughout her tenure, Jackson has earned a reputation as a warm and relaxed presence on the bench, willing to give lawyers ample time to make their arguments.

“She was not gruff at all -- she was very polite, very personable,” said , a lawyer at the law firm Williams & Connolly who argued a case in front of Jackson in 2016. “She really had questions she wanted answers to and did not give away how she was thinking about the case.”

In the early weeks of the Biden administration, Jackson has emerged as a favorite for the next Supreme Court vacancy, alongside , who serves on the Supreme Court of California.

Jackson “is surely on any Supreme Court shortlist, having served on an extremely prominent trial court and having been well known and respected for years in Democratic legal circles,” said , a Washington appellate lawyer and founder of Scotusblog, which tracks the court.

For some liberals, Jackson would be a welcome reinforcement at a Supreme Court where conservatives hold a 6-3 majority.

Jackson offers “stellar credentials” and “a demonstrated commitment to equal justice,” said , president of the Alliance for Justice. “President Biden promised he would prioritize demographic and professional diversity, and I would say Judge Jackson honors that commitment in spades.”