State top courts have begun weighing in on whether their laws provide greater protection for abortion rights than the federal constitution, with mixed results.

A majority of South Carolina’s Supreme Court justices recently held that the state constitution’s guarantee against unreasonable invasions of privacy extends to abortion.

But the Idaho Supreme Court reached the opposite conclusion, holding that there’s no fundamental right to abortion in the state constitution.

VIDEO: Beyond Abortion: The Fight Over Fetal Personhood Is Here

Various trial judges around the country have blocked anti-abortion laws from taking effect while suits proceed, but South Carolina and Idaho are the first state top courts to decide the substantive issue of constitutionality, according to the Brennan Center and Center for Reproductive Rights.

The two decisions show that states likely will remain divided on abortion rights, especially given differences in the wording of their constitutions and how that language is interpreted.

So far, 34 post-Dobbs cases have been filed in 19 states, according to the Brennan Center for Justice and CRR, which joined together to track the litigation. Twenty-seven are still pending in state trial and appellate courts, according to the groups’ litigation tracker. 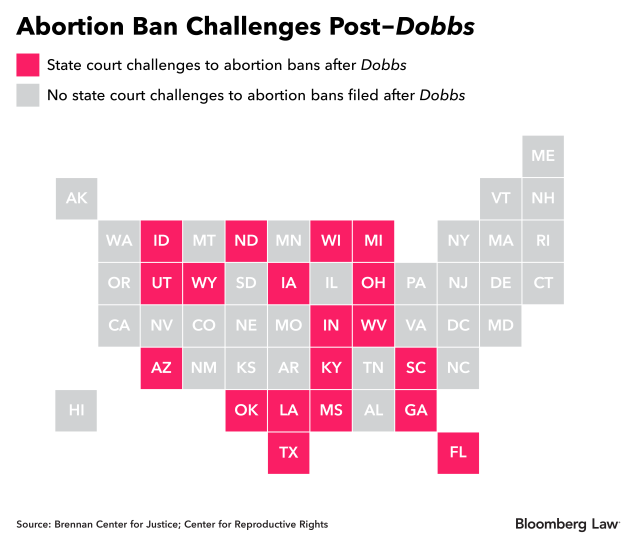 The South Carolina and Idaho cases were part of a wave of state-court litigation filed after the US Supreme Court declared in Dobbs v. Jackson Women’s Health Organization that there’s no federal constitutional right to abortion. Litigants represented by national groups, like the Planned Parenthood Federation of America, the CRR, and the American Civil Liberties Union, argued that various state constitutions protect the right to end a pregnancy.

The South Carolina Constitution contains an express provision that protects citizens against unwarranted invasions of privacy. Three justices held Jan. 5 that includes abortion, but one of them struck down the law in question solely on the basis that it was an “unreasonable” assault on the constitutional privacy right.

There is, however, no express right of privacy in the Idaho Constitution, and the state’s top court declined Jan. 5 to imply that there is a fundamental right protecting abortion access.

Both cases challenged measures often referred to as “heartbeat” laws or “six-week abortion bans.” These laws ban abortions during the earliest weeks of pregnancy after cardiac activity is detected, which arguably occurs at around six weeks after a person’s last menstrual period.

The Idaho court also upheld a near-total ban that makes performing most abortions a felony and a Texas-style civil enforcement provision that gives citizens the right to sue for violations of the six-week ban and collect $20,000 in damages. The laws are valid, because they’re rationally related to legitimate state interests, the court said.

Still to be decided is a case heard by the North Dakota Supreme Court in November involving the state’s challenge to a judge’s order blocking enforcement of a law that criminalizes abortions at all stages of pregnancy, without exception.

The law allows doctors to defend themselves when charged with performing an illegal abortion by arguing that the procedure was necessary to save the pregnant person’s life or to end a pregnancy resulting from rape or incest.

The court could reject state Attorney General Drew Wrigley’s (R) attempt to bypass normal appellate procedure and send the case back to the trial court for a final judgment without vacating the injunction, or it could decide the case on the merits.

A case over whether the Kentucky Constitution’s rights to privacy and self-determination protect abortion was submitted to the state’s top court in November. It’s been complicated, however, by voters’ rejection of an amendment to clarify that there’s no state constitutional right to end a pregnancy on Nov. 8. No decision has been announced.

The Indiana Supreme Court is scheduled to hear oral arguments Jan. 19 on the validity of a post-Dobbs law that criminalizes abortion, with exceptions for rape or incest, lethal fetal anomalies, or to prevent serious health risks for pregnant patients.

Monroe County Circuit Court Special Judge Kelsey B. Hanlon barred Indiana from enforcing the law in September, saying it likely violates rights guaranteed under the Indiana Constitution. Unlike the US Constitution, Indiana’s founding document includes broad rights to privacy, bodily autonomy, and self-determination that spring from a right to liberty, Hanlon said.

Following on Indiana’s heels is Kansas, where the state’s top court will hear arguments in two abortion-related cases Jan. 30.

The first argument focuses on a pre-Dobbs law that banned most dilation and evacuation abortions—the most common procedure used during the second trimester of pregnancy. Judge Teresa L. Watson, of the Shawnee County District Court, struck down the ban in April 2021 using a strict scrutiny analysis, saying it wasn’t narrowly tailored to further the state’s compelling interest in preserving life.

The Kansas Supreme Court previously held that the state constitution protects a fundamental right to abortion. In August, Kansas voters overwhelmingly rejected a proposed constitutional amendment that would have overturned that decision and stripped the right to abortion from the state’s governing document.

The second case dates back to 2011 and involves a challenge to abortion provider licensing requirements and rules governing medication abortions.

The Georgia Supreme Court is facing an appeal from a Fulton County Superior Court ruling that voided the state’s heartbeat ban because it was unequivocally unconstitutional under both state and federal law when it was adopted in 2019.

The state’s top court temporarily halted the lower court’s order blocking Georgia officials from enforcing the law during the litigation. The appeal is in its early stages.

And in Utah, the state supreme court is set to review an injunction against the state’s near-total abortion ban. It denied a motion to stay the injunction in October.

Ohio Attorney General Dave Yost (R) has asked the state supreme court to review a trial court order that blocked enforcement of a heartbeat ban. An intermediate appellate court refused to weigh in on the case on the ground that the injunction wasn’t a final judgment.