made his name in U.S. corporate law two decades ago defending against charges of anticompetitive behavior in the first major antitrust case of the internet age. As the tech industry is once again dominated by talk of monopolies, Gutierrez, now ’s chief legal officer, has switched sides. For the past five years he’s led Spotify’s campaign against , one of a series of antitrust actions with the potential to make an even greater impact than the Microsoft litigation.

While the shift in public opinion about the tech industry in recent years has been stunning by any measure, the change in the perception of Apple may be the most improbable. When Gutierrez started accusing the company of anticompetitive behavior in 2016, many public officials had already begun to look with suspicion at and ’s Google, with their business models based on amassing personal data and their troubling impacts on U.S. politics. Apple was far less controversial. Lawmakers associated the company with , one of America’s greatest entrepreneurs; with the explosion of convenient smartphone apps; and with the comforting buzz of the phones in their pockets. “You had to overcome a certain amount of deference regulators had,” Gutierrez says. “So many people I was talking to were using Apple products and admired the company.” 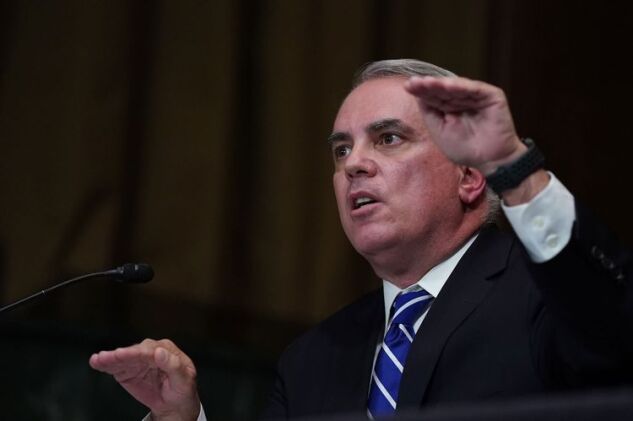 Gutierrez appeared before a Senate Judiciary subcommittee panel in April to press his case against Apple.
Photographer: Stefani Reynolds/Bloomberg

Gutierrez has been instrumental in chipping away at that admiration. His criticism of Apple starts with its mobile App Store, a business it invented and still dominates. App developers such as Spotify and claim Apple has abused its power by requiring them to pay a 30% fee for transactions within its App Store and within apps themselves—and by prohibiting them from offering customers other ways to pay.

Gutierrez says he doesn’t think Apple has helped itself with a defense based on rejecting criticism outright, a stance that reminds him of Microsoft’s early response to its antitrust troubles. A growing number of governments, other tech companies, and regulators have become receptive to Gutierrez’s arguments. In June 2020, the European Commission responded to Spotify’s complaints about Apple by , and there are signs it’s leaning against Apple. Two months later the video game maker Epic sued Apple. U.S. lawmakers are considering sweeping antitrust legislation that could significantly affect large tech companies, and on July 9 President Joe Biden signed an that included a policy of focusing on tech companies in antitrust enforcement. France, Germany, Japan, the Netherlands, and the U.K. are all investigating the company as well.

On July 7 dozens of U.S. state attorneys general for similar practices in the Google Play store. Gutierrez says Spotify also plans to pursue a campaign against Google that mirrors the one it’s waging against Apple if it follows through with its Play Store policy changes. He’s increasingly optimistic that governments will take significant action to address his app store critiques. “All of these things that may be loosely connected today point to a new set of competition rules that will apply to these gatekeeper platforms on a global basis in the long term,” he says. “What we perceive is the genuine desire to do something, and something that will be effective.”

Apple says the App Store has helped Spotify become the largest music subscription service in the world, that most users of Spotify’s app use the free version and so pay nothing to either company, and that Spotify now pays a commission of only 15% on those subscriptions that did come through Apple devices. “They want all the benefits of the App Store but don’t think they should have to pay anything for that,” an Apple spokesperson said in a statement. Google declined to comment.

Gutierrez, one of the most powerful attorneys of Hispanic descent working in U.S. corporate law, was born and raised in Venezuela. He joined Microsoft in 1998 after graduating from the University of Miami’s law school—it was his fourth law degree—and started off as its lead counsel for Latin America and the Caribbean. He impressed his bosses enough to get dispatched to Europe to serve as the top lawyer defending Microsoft before the European Commission, which had accused the company of anticompetitive behavior for integrating its Internet Explorer browser with its Windows operating system, making it harder for competing browsers.

“We were there in the darkest hour for Microsoft in Brussels,” says John Kelly, who at the time oversaw Microsoft’s corporate affairs in Europe. “We were the symbol for many people of the big arrogant monopolists.” Although Microsoft would lose the case, Gutierrez gained an understanding of antitrust law in Europe, honed his strategic thinking, and cultivated relationships with some of its top lawmakers.

Spotify hired Gutierrez away from Microsoft in 2016. The idea wasn’t specifically to go after Apple, says , a board member who was then chief financial officer, but the iPhone maker had already started to make the music service’s life very difficult. Chief Executive Officer wanted to make more money from apps that relied on Apple devices to reach their customers. Apple had long taken a commission on apps that charged an initial download fee, but there was a period starting in 2014 when Spotify also used Apple’s in-app purchase system, which required it to give Apple a cut of the recurring revenue it made when customers subscribed through its app. 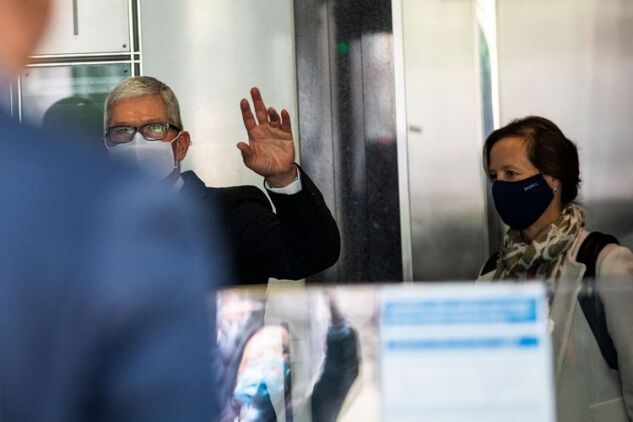 Cook and Apple General Counsel Kate Adams exit a U.S. District Court in Oakland, Calif., on May 21 after defending the company in a lawsuit brought by Epic Games.
Photographer: Philip Pacheco/Getty Images

Subscriptions account for about 90% of Spotify’s sales, and it wasn’t even close to turning a profit, even without Apple taking that cut. But if Spotify didn’t allow in-app payments, Apple’s rules forbade Spotify from asking its customers inside the app to sign up through its website, where the company wouldn’t have to pay Apple a commission.

In 2015, Apple unveiled Apple Music, a direct competitor to Spotify that came at the same price. Apple didn’t have to worry about the cost of App Store commissions.

By this time, Gutierrez knew most of the major lawyers in Silicon Valley. Soon after taking the Spotify job, he flew to Cupertino, Calif., to meet with Apple’s general counsel, . The companies failed to find a compromise, and Apple threatened to kick Spotify off the App Store and withheld approval for updates that patched up security vulnerabilities. 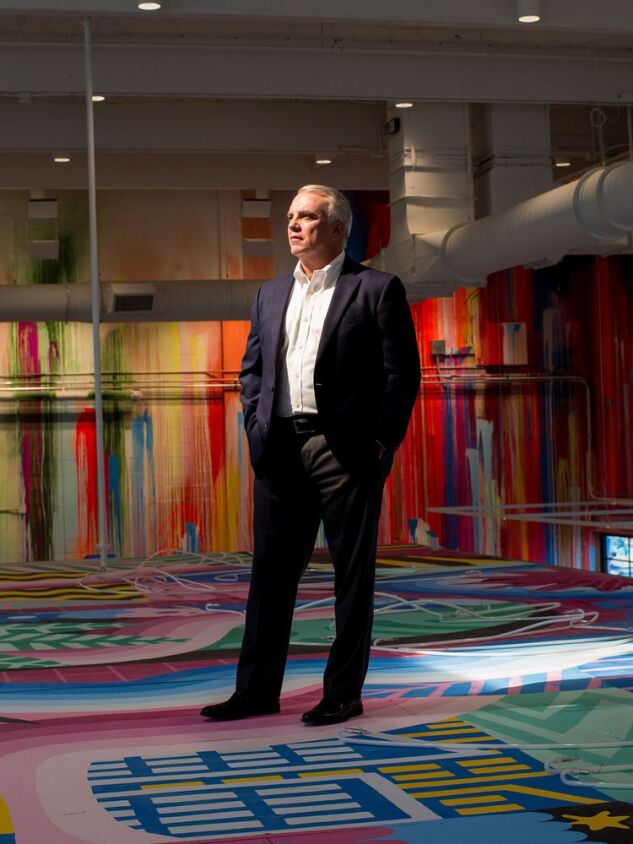 With the blessing of CEO , Gutierrez took the lead in developing and executing Spotify’s counterpunch. He began gauging the willingness of regulators in the U.S. and Brussels to pursue an antitrust case. Gutierrez saw Europe as a better bet, given the relative dormancy of antitrust enforcement in the U.S. It didn’t hurt that Spotify was a European company and Ek one of the Continent’s most successful entrepreneurs.

Apple insisted that Spotify was asking for new rules. But Gutierrez argued that Apple had only tightened the screws when it started dominating the market. Spotify shared confidential financial information with officials to show how Apple’s policies affected its profitability and the rate of subscription growth.

Gutierrez bided his time until he thought European officials would be receptive. In 2019 he filed a complaint, and the European Commission responded by opening an antitrust investigation. In April the commission sent Apple a statement of objections, laying out evidence of what it saw as the company’s abuse of power, a signal it’s likely to take action against the company. “The Commission’s argument on Spotify’s behalf is the opposite of fair competition,” said the Apple spokesperson in a statement.

As confident as Gutierrez feels about Spotify’s own litigation, he now says the best chance for reforming the tech industry is through new laws. To push for policy changes, Spotify has rallied other developers into a group called the Coalition for App Fairness, which includes dating-app developer and the consumer-electronics company Tile. In its U.S. lawsuit, coalition member Epic Games unearthed internal documents that could be damaging to Apple even if it loses.

Gutierrez is careful to distance himself from Epic’s litigation, because he sees the coalition as an advocacy group rather than a legal defense fund, but he says he’s unconvinced by Apple’s claims that it doesn’t know how much money the App Store generates. “This is not like the budget for printer toner,” he says. “This is a multibillion-dollar business.”

The chances of new regulations or laws in the U.S. look better than ever. In April, Gutierrez appeared before a Senate panel to . At the same time, he’s been a chief advocate in Europe for a bill that would impose new restrictions on five of the world’s biggest technology companies.

The landscape looks a lot different than it did when Gutierrez first began talking about Apple. His actions “have spawned a lot of the other Apple-related activity across the globe,” says , who’s worked with Gutierrez on antitrust issues in Europe. “It’s a snowball Spotify got rolling.”

(Updates sixth paragraph with additional comment from Apple. A previous version of this story corrected the description of Spotify’s use of Apple’s in-app purchasing system.)

To contact the author of this story:
in Los Angeles at lshaw31@bloomberg.net