Sidley Austin has shaken up the private equity space, in part using a string of lateral hires from more established PE players to make rapid progress in a market where the top law firms have had practices spanning several decades.

The Chicago-founded firm saw its revenue from this private equity work hit roughly $300 million this past year, a leap from just $50 million in 2011.

But starting nearly from scratch in one of Big Law’s most competitive—but lucrative—areas hasn’t been easy and required the firm to think a little differently than many of its peers.

“Our biggest challenge of course over time was convincing clients and lateral partner transfer candidates that we were serious about private equity and that we were intending to play at a very high level in that space,” said Brian Fahrney, longtime Sidley partner and co-head of its private equity practice. “When you’re trying to build something like this out and starting from a low level of activity and footprint, it’s hard.” 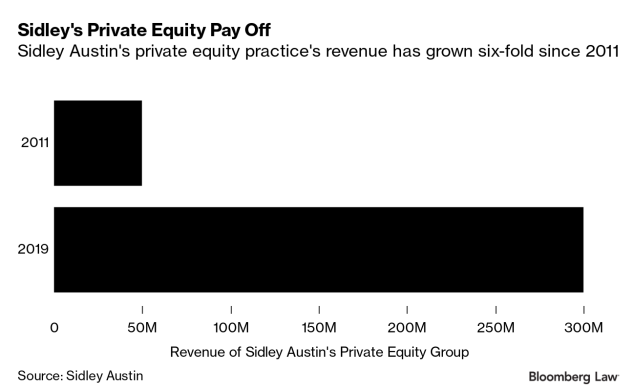 Firms like Simpson Thacher & Bartlett and Ropes & Gray can trace their private equity practices’ roots back to the 1970s and 1980s. This group, which also includes Latham & Watkins and Kirkland & Ellis, rode the private equity wave to grow from millions in annual revenue to billions by the early 2010s.

Sidley Austin was known in the corporate world for its public company mergers and acquisitions work. While it did some private equity, its corporate partners were splitting time between that work and traditional M&A.

“As those years progressed, we saw we were selling off a lot of our clients and it was a bit of an eye opener,” Fahrney said.

It became clear that a dedicated private equity practice was needed, and the firm’s management committee made the decision to build one out, focusing on lateral additions to existing corporate and finance talent.

As the new kid on the PE block, Sidley had to figure out how to play to its strengths.

“They’ve developed what I would call a thoughtful concrete strategy,” said Kent Zimmermann, a law firm management consultant with the Zeughauser Group, who has advised Sidley over the years.

Sidley is a full-service firm known for its deep bench across practices including regulatory, financial services, life sciences, insurance, and energy, a diversity of work that informed its PE approach.

Like Cooley, which used its technology practice to construct a tech PE practice, or Latham, which built up PE around its energy practice, Sidley used its strength across several sectors as a bridge to build private equity, said Zimmermann.

The talent play has grown Sidley’s private equity team from 30 lawyers to 150 since 2011.

The expansion into private equity has come at a time of a bullish market and growth in the legal profession, Barden said. During that time Sidley’s gross revenue grew 65% from $1.34 billion at the start of the decade to $2.2 billion in 2018 and its profits per equity partner increased 74% from $1.46 million in 2010 to over $2.5 million in 2018—a feat achieved only by a handful of other law firms.

“If you’re in that league, one of the benefits is that you can pay market compensation even when market is very high,” Zimmermann said.

But the firm has avoided the approach of hiring for sheer numbers, which is sometimes favored by other firms when building a new practice.

One of those key hires was Dan Clivner, longtime head of Simpson Thacher’s Los Angeles office, who joined Sidley in May 2015 and now serves as global co-leader of the firm’s M&A and private equity practice.

When he began conversations with Barden about joining Sidley, the firm’s private equity group was growing, Clivner said, but it was behind other firms in the league tables and reputation.

Part of Sidley’s focus in growing the group, which intrigued Clivner, was its plan to zero in on middle market private equity clients, who he said oftentimes felt underserved by firms that were focusing on the largest clients.

“What I realized very quickly was they were very loyal and moved [to Sidley],” Clivner said of his clients. “They felt much more valued here.”

Many of these clients are now pursuing alternative growth strategies and some have seen junior employees spinning off into their own firms as of late, giving Sidley more potential business.

Following Clivner’s hire, Sidley made another important move when it poached six partners from Kirkland & Ellis’s London office in February 2016, including Erik Dahl.

“Initially I was kind of very skeptical,” said Dahl, who now co-leads the firm’s private equity practice and is a member of the firm’s executive committee. “I’m thinking Sidley’s not even a private equity firm, why go there?”

Sidley has a very specialized, industry focused set of practice groups with lawyers who have done M&A deals and investments within these focuses, Dahl said. He said this is different from his experience at Kirkland, and has allowed his team as corporate lawyers to partner with other practices to understand not only the asset, but the regulatory framework around it.

“That combination has just been tremendously impactful in terms of helping us win business with clients and also client satisfaction,” Dahl said.

For instance, in two deals for Dahl’s longtime clients there were regulatory issues in CFIUS and data protection, both strong areas for Sidley. Dahl and his team brought in other Sidley teams to solve those issues.

“It gave our clients a real sense of additional value added to the point where our client basically said, we understand why you’re on the Sidley platform,” Dahl said.

Out west, Sidley added Milbank’s Kenneth Baronsky in Century City and Jared Jensen from Goodwin Procter in San Francisco. It has hired a number of lawyers from Cooley, including Mehdi Khodadad and Josh DuClos.

In large part thanks to targeted laterals with entrepreneurial mindsets, the number of Sidley’s major clients with over $1 million in billings has increased more than fourfold compared to 2011.

But the top of the heap for private equity is still dominated by firms with long-established private equity practices. Simpson Thacher led the tables with $139 billion across 105 deals, followed by Kirkland & Ellis with 400 deals worth $126 billion.

It’s much harder for relative newcomers to catch up to larger, established private equity practices because to do so, they have to recreate infrastructures that already exist at these law firms, noted the head of a leading private equity practice at an AmLaw 25 law firm, who declined to be named to protect relationships in the space.

Funds don’t want to recreate the wheel and they want to make sure their law firm and advisors know the market and the work because the margin of error is thin to win a deal, the partner said. They won’t pay to teach people the market, the attorney added, which gives firms with long-standing private equity practices a competitive advantage.

Those at Sidley acknowledge that there’s still a ways to go and they are willing to make the investment. The firm plans to continue its expansion in private equity, especially in New York, one of the biggest private equity markets in the country and also in London and Asia, though much of it will be driven by demand.

But looking back at the decade, Barden sees a firm that’s made leaps despite the stiff competition.

“We view [it] as quite an achievement and we’re quite proud of the progress we’ve made,” he said.