The Supreme Court’s 67 opinions are in: Call it the crossover term.

Liberal justices prevailed more often in closely divided cases than did conservatives. The 10-7 count was partly due to every Republican appointee breaking ranks at least once in 5-4 or 5-3 cases.

These results come despite anticipation that the fortified conservative majority with the addition of Brett Kavanaugh immediately would push the court sharply to the right. 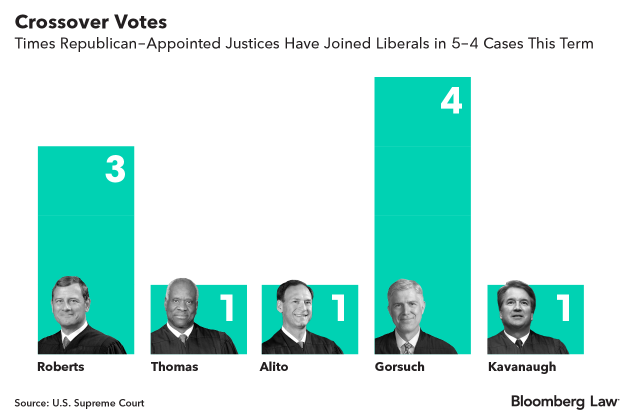 Both conservatives and liberals prevailed in consequential cases that were closely divided.

For conservatives, this included a 5-4 decision on the term’s last day for opinions that broke along ideological lines and concluded that political branches, not the courts, can police partisan redistricting, or the reworking of voting maps for legislative elections.

Liberals also had a few notable wins. These included another 5-4 decision, also on the term’s final opinion day, that said the Trump administration failed to give an adequate reason for adding a citizenship question to the 2020 census.

The Roberts Court issues an average of 15 closely split decisions each term, according to Empirical SCOTUS’s Adam Feldman. This time there were 21 decisions that broke either 5-4 or 5-3. 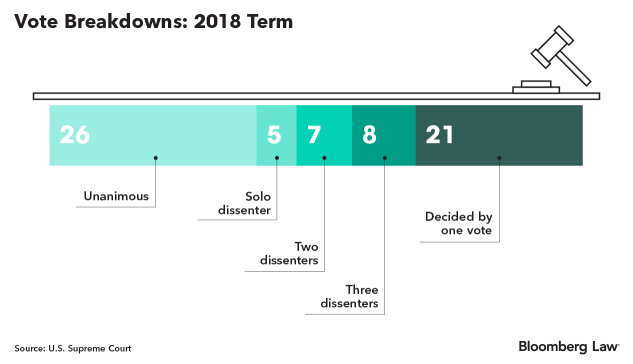 The glut of conservative crossover votes in these cases helped contribute to the 26 unique vote breakdowns in this term’s opinions.

The most common voting lineup was in unanimous cases—by far. The justices handed down 10 in their first 11 opinions, for a total of 26. One was Kavanaugh’s first opinion, the arbitration decision, Henry Schein, Inc. v. Archer & White Sales, Inc.

In total, the justices were 9-0 in 23 decisions this term and 8-0 in three. The shorthanded rulings occurred in cases where Kavanaugh hadn’t yet been confirmed when they were argued at the high court.

The next most frequent lineup—happening seven times—was the 5-4 ideological breakdown where the conservative justices prevailed over their more liberal colleagues.

After that it’s Gorsuch’s four crossover votes, where he teamed up with the liberal justices.

Gorsuch’s crossover votes, however, weren’t enough to land him in the majority as often as his other colleagues. At 72%, he and Thomas were the justices the least often in the majority.

On the other end of the spectrum was Kavanaugh, who along with Gorsuch was nominated by President Donald Trump. Kavanaugh was the justice most often in the majority at 86%.

Given that difference, it isn’t surprising that Gorsuch penned eight more dissents than Kavanaugh for a total of 11. He had the most.

But Thomas wrote the most opinions overall. The longest current serving member of the court authored eight majority opinions, 12 concurrences, and seven dissents.

Roberts and Kagan each wrote a dozen or fewer cases total.

The court’s 158 majority, concurring, and dissenting opinions weren’t kind to the California-based U.S. Court of Appeals for the Ninth Circuit nor the state court decisions that came in front of the justices.

Those courts traditionally do poorly in front of the justices. This term, the Ninth Circuit prevailed in two of 12 cases, while state courts won two of 10.

The Cincinnati-based Sixth Circuit had also been received poorly by the Supreme Court in recent terms. So much so that it was dubbed the “new Ninth.”

But this term, it was among the best-performing circuits. Its judgments were affirmed in four of six cases.