A court refusing to accept new cases because it’s run out of paper. Cops in courtrooms waiting to testify rather than out on the streets. And the early release of a defendant who later rapes a woman and kills a pedestrian in a high-speed chase.

All of those real-world consequences of state court budget cuts in the last recession were detailed in an ABA report after it was over.

With another potential recession looming, court officials who have been through it before are fearful of experiencing more of the same. As Sue Bell Cobb, the former chief justice of the Alabama Supreme Court, put it, courts decide who loses their businesses, their homes, their children and even their freedom.

“It isn’t the branch of government you want to go underfunded,” said Cobb, who took the helm in Alabama “right as the bottom fell out” in the last recession.

For a co-equal branch of government, judiciaries account for a pittance of states’ budgets even in prosperous times. In 2017, it varied from a high of 4 percent to well under 1 percent, depending largely on whether the judiciary is funded mostly by the state—like in California—or the local government—like in Texas, said William Raftery of the National Center for State Courts.

Such tight budgets can make it difficult to squeeze any more money out, Raftery said. With personnel costs typically making up about 90 percent of state court budgets, according to Raftery, the only area to get substantial savings if funding is cut is people.

And that has an immediate effect on public services, including public safety, said University of Florida law professor Jon Mills, who helped author the ABA report. 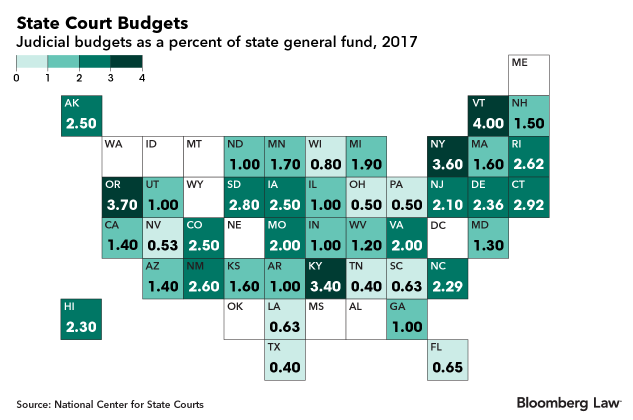 Judicial budgets as a percent of state general fund

With regard to public safety, the impacts can be dramatic.

They can include capital defendants being held for years without trial because the state can’t afford to provide the defendant with an attorney, the ABA report noted. There was the Washington case of a defendant being released on speedy trial considerations, only to rape and kill while on release.

But even the more routine impacts can have far-reaching effects.

In Nevada, the state didn’t have the bandwidth to enter DNA from arrested individuals into a database to run against future cases, the ABA noted. Because court couldn’t be held some days for money reasons, it took longer for cases to be held. When those cases required police testimony, officers had to wait around to be called. Lack of funds for pretrial and probation officers meant more defendants to supervise.

Recessions can bring more business disputes into court, especially if someone hasn’t been paid. With certain kinds of claims, the economic downturn can push the capacity of courts.

“Perhaps nowhere is this more apparent than in residential foreclosures,” the ABA report said.

“The dramatic increase in mortgages requiring judicial adjustment or termination, combined with reduced staff and courtroom hours, has led to ‘robo-signing’ abuses by some lenders (which can hardly be monitored by judges who have less than a minute per file),” the report said.

“Such losses can then have a ripple effect,” it added.

To combat further cuts in the face of a potential recession, Cobb said state courts have to be ready to spread the word on the drastic effects of an underfunded judiciary.

“Court leaders should be getting out ahead of any recession, cementing relationships with legislative leaders,” said Bert Brandenburg, who headed Justice at Stake, a judicial advocacy group that shut its doors in 2017.

Technological efficiencies helped get courts through the last recession but there’s only so much more automation courts can introduce, Raftery said. Alabama was able to implement a statewide electronic case management system that generated revenue, Cobb said.

State courts “should be ready to make the case that cutting court funding can only aggravate a recession, by creating delays that waste taxpayer money and potentially cripple small businesses who need any litigation they get into resolved quickly,” Brandenburg said.