Chris Marr: New York business groups have resigned themselves to the likelihood that employers will be required to provide salary information in job ads statewide as they ask Gov. Kathy Hochul to amend, not veto, a pay transparency bill.

If Hochul signs the bill (S9427), the state will join Colorado, Washington state, and New York City in requiring a salary amount or range in job listings. The New York City law takes effect Nov. 1, and the statewide law would take effect next year, 270 days after Hochul’s signature. The California legislature passed a similar bill in August, sending it to Gov. (D).

The pay transparency measures are aimed at tackling pay disparities that often affect women and workers of color. Pay equity advocates just marked Black Women’s Equal Pay Day on Sept. 21—the estimated date that the average Black woman has to work for her 2021 pay level to catch up to that of the average White, male worker.

“We don’t want a patchwork of different laws around the state. That’s the main change we need at this point,” he said.

New York law allows the governor amend bills before signing them, in which case they become law contingent upon the legislature approving her changes in its next session.

The Business Council has “philosophical concerns” about the measure hurting business growth and hiring in New York, but they’re not encouraging or expecting Hochul to veto it, Kerbein said. The council previously persuaded the legislature to remove a proposed requirement that job ads include a description of employee benefits as well.

Another business advocacy group, the Partnership for New York City, is urging Hochul to amend the bill to clarify that New York businesses don’t have to include salary information in ads for remote jobs performed outside the state, said Kathryn S. Wylde, the partnership’s president and CEO.

“The legislature made the major changes that we were looking for before they passed it,” Wylde said.

The spread of salary disclosure measures around the US could increase the chances of pay discrimination lawsuits. But the laws’ supporters say the goal isn’t to see more companies sued, but to give them incentive to review their pay practices and make adjustments to correct disparities, said Seher Khawaja, senior attorney at Legal Momentum, a women’s legal advocacy group that has encouraged Hochul to sign the bill without amendments.

Easing the secrecy around pay has benefits not just for workers but also businesses, she said.

“Salary disclosure makes employers more attractive and trustworthy to workers and helps bring in talent,” Khawaja said, noting it cuts down on the time wasted by people applying for jobs only to learn later the pay range is too low. “Right now, you just really have no clue. Is it in the ballpark? You don’t know, and that just seems absurd.” 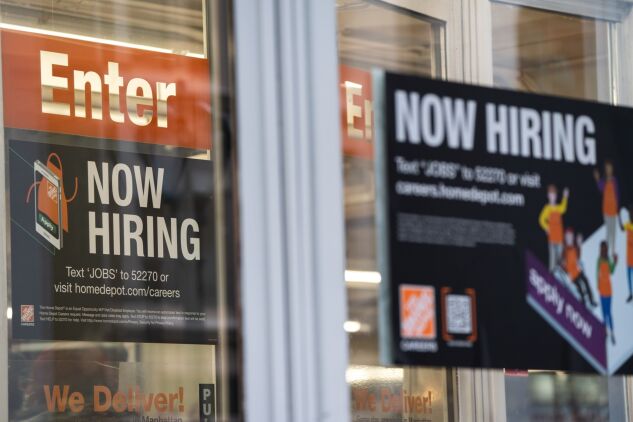 Robert Iafolla: While has painted a rosy public picture about the state of the pandemic recently, his administration continues to struggle with defending its suite of Covid-19 vaccine mandates in court.

A federal judge in Louisiana last week permanently blocked an inoculation requirement for staffers, contractors, and volunteers with Head Start, a federal program that provides educational and related services to children of low-income families. That order is effective in 24 states, including Florida, Ohio, and Georgia.

Also last week, a federal appeals judge pointed to Biden’s recent assertion that the “pandemic is over” during oral argument over the vaccine mandate for federal contractors.

Legal challenges have disrupted the Biden administration’s efforts to boost vaccination rates. In the US, 67% of the population is “fully vaccinated,” and 32.5% have received a booster, according to Bloomberg’s vaccine tracker.

The administration withdrew its shot-or-test rule for large employers after the US Supreme Court effectively killed it with a preliminary injunction. Although the high court declined to similarly halt the vaccine mandate for federally funded health-care facilities, the justices are weighing a petition to take the issue back up in the coming term.

Several courts have blocked the vaccine mandate for federal contractors, handing down orders effective in more than two dozen states. The issue is percolating in the circuit courts, where, for example, the full Fifth Circuit is considering whether to lift an injunction against the inoculation requirement for federal workers. The court heard oral argument earlier this month.

Federal judges—especially those appointed by President Donald Trump—have been more hostile to federal vaccine rules compared to other types of shot requirements.

“We’re still seeing challenges to state and private-employer mandates consistently losing, and challenges against the federal government winning,” said Dorit Reiss, a professor at the University of California Hastings College of the Law who specializes in vaccine policy. “There’s a big split.”

The Supreme Court relied on the “major questions doctrine,” which says that Congress must speak clearly when empowering agencies to regulate issues of vast significance, when it blocked OSHA’s shot-or-test rule.

US District Judge a Trump appointee, cited the doctrine when he permanently blocked the Head Start vaccine mandate.

The major questions doctrine has gone from something the Supreme Court used once every five years to a “Swiss Army knife” for courts to limit agency power, said Wendy Parmet, a law professor who directs Northeastern University’s Center for Health Policy and Law.

Like other judges, Doughty emphasized “liberty interests” in a way that enhances the power of the courts, even though the case didn’t involve constitutionally protected rights, she said.