When he argues this spring at the U.S. Supreme Court that Oklahoma couldn’t prosecute an American Indian for rape committed on Indian land, former acting U.S. solicitor general Ian Gershengorn will have widespread backing from Indian interests by way of the Tribal Supreme Court Project.

The issue at the heart of Muscogee (Creek) Nation member Jimcy McGirt’s appeal has profound implications for tribal jurisdiction and sovereignty that extend beyond matters of crime and punishment: Whether Congress “disestablished” the tribe’s 19th century boundaries and, in turn, whether large swaths of Oklahoma fall under tribal or state control.

The justices failed to answer the question last term in Creek member Patrick Murphy’s murder case, apparently deadlocking 4-4 due to the recusal of Justice Neil Gorsuch, who previously sat on the Tenth Circuit when Murphy’s appeal was pending there.

Now with the full court free to hear McGirt’s case, which comes from Oklahoma state court, it can finally put to rest the question with implications not just for the Creek but for other tribes as well.

Those stakes put the case right in the wheelhouse of the Project, which was formed two decades ago, in the face of several defeats in the high court’s 2000-01 term, with the mindset that one tribe’s loss could negatively impact others. The Project is run by the National Congress of American Indians and the Native American Rights Fund.

“It had become very clear with these decisions in 2001 that the court was not with the tribes anymore. It was a national emergency,” NARF executive director John Echohawk said.

“Four of them were defeats for the tribes,” recalled Indian law attorney Riyaz Kanji, who clerked for the now-retired Supreme Justice David Souter in the 1994-95 term.

He pointed, for example, to Nevada v. Hicks and Atkinson Trading Co. v. Shirley, cases that “really had broad importance” and “got the attention of tribal leaders.”

After the term, tribal leaders called a meeting in Washington, D.C., and that’s when the Project was born.

It’s modeled after a similar group formed to help states protect their interests at the Supreme Court, said Kanji.

When he was clerking at the Supreme Court in the mid-90s, he said he heard “from a number of the justices” that “the quality of state advocacy in the 80s had not been good, the states were losing some big cases.”

So they formed a supreme court project that helped them.

“It wasn’t rocket science,” he said.

There’s no official Project membership, noted Joel Williams, who leads it for NARF.

“We can go to those people for various types of assistance, whether that be directly assisting the parties in some way or writing amicus briefs or helping us to think through strategy,” he explained.

The working group comes from a wide swath of the legal community, including influential lawyers from Big Law and smaller firms.

Kanji, an advisor to the Project who represents the Creek as amicus in the McGirt case, singled out Gershengorn, who clerked for John Paul Stevens the same term Kanji clerked for Souter, saying “he specifically, and Jenner & Block more generally, have been very involved really from the get-go.”

The goal, Gershengorn said, “is to try to make sure that the tribes are being as well represented as the United States, as the state governments, as the best of private firm clients, and they’re getting the same level of advocacy that others who appear before the Court are getting.”

Kanji also pointed to Sidley Austin heavyweights Carter Phillips and Virginia Seitz as very helpful to the Project. He noted an amicus brief they took the lead on in United States v. Lara, a 2004 case involving tribal prosecution power.

Shortly before he went on the bench, Sutton wrote an amicus brief in United States v. Navajo Nation, a 2003 case stemming from lease negotiations over mining on tribal lands.

Kanji said he called Sutton “out of the blue” to ask him to write a brief and Sutton called back that same day, even though he was on vacation.

A big part of Project work is coordinating amicus briefs.

“Coordination at the earliest stage possible,” said NCAI general counsel Derrick Beetso, who heads the Project on that group’s end, “and just serving as a brain trust and technical assistance venue to make sure that, when we act as amici to educate different judiciaries, we do so in the best possible way that takes into consideration all of the tribes.”

When clerking, Kanji saw that the justices don’t “really have any obligation to read amicus briefs,” and so there’s been a “focus on streamlining the number of briefs, having them focus on different topics that add value, having counsel and or amici whose names the court will recognize and pay attention to on the briefs.” 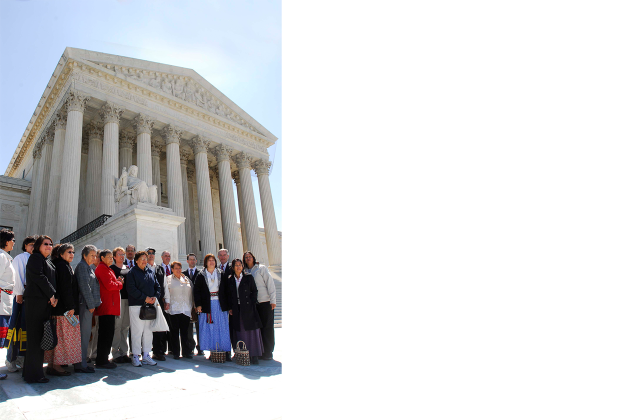 The McGirt case is a repeat of sorts.

Last term, Gershengorn argued for Creek member Murphy, whose claim—that he shouldn’t have been prosecuted in Oklahoma state court because his crime really took place on reservation land—could have widespread consequences for that tribe and others, with the state warning of grave tax, regulatory, and crime fighting implications if the justices find the Creek’s 19th century boundaries haven’t since been undone by Congress.

Kanji argued for the Creek itself as an amicus, and hopes that the court will grant the Creek argument time again in McGirt.

But with only eight justices hearing Murphy’s case last term, they couldn’t reach a decision. Gorsuch was recused, presumably due to involvement when the case was at the Tenth Circuit, where he sat prior to his high court appointment.

Now with McGirt’s appeal, which raises the same issues without recusal concerns, all nine justices can weigh in. That sets up the possibility for Gorsuch to break a tie, with McGirt and supporters hoping the justice sides with them as he has in other tribal disputes.

Heading toward the McGirt argument, NARF’s Williams gave some insight into the process.

“What we do is we have a discussion that’s open to the entire Tribal Supreme Court Project working group just about the case generally, where we’ll have the lead attorneys”—here, Gershengorn—“and he’ll be on the call and talk about the case, describe the facts and posture and all of the legal issues, and there’s an opportunity for Q & A, anybody can ask questions during that call, provide feedback, provide their thoughts on law and strategy and all those sorts of things,” Williams said.

From there, he said, they formulate an amicus strategy and form a smaller working group that carries “right through the end” to make sure they’re “not duplicating efforts.”

Among the amicus briefs filed in the McGirt case are Kanji’s filing on behalf of the Creek as well as briefs from former federal prosecutors, advocacy groups concerned with indigenous women and domestic violence, and the Cherokee Nation, another one of the tribes that could be impacted by the ruling.

The Project also sometimes works to keep disputes out of court, investing “significant resources in opposing certiorari in certain kinds of cases,” Sidley’s Phillips said, adding that he thinks the Project has been quite successful on that front.

Gershengorn observed that a brief opposing Supreme Court review can be the most important brief filed in a case.

He pointed to a case where his firm filed in a dispute—where tribal interests prevailed in the lower court—over when state law enforcement can follow someone onto a reservation.

Despite there being an alleged split in the lower courts on the “hot pursuit” question—the justices are more likely to take a case with a split—Jenner & Block filed an opposition brief and the justices rejected the state’s appeal.

“That’s a victory that never shows up in the annals of the court, in some ways,” Gershengorn said, “and yet, I think it was a potentially big victory for the tribes, to maintain a victory that they had won in a lower court.”

More recently, Kanji observed, the Project is “coming down the chain in the courts of appeal and thinking ahead.”

One such case is pending in the Fifth Circuit, Brackeen v. Bernhardt, a closely-watched challenge to the constitutionality of the Indian Child Welfare Act, a law that seeks to keep children connected to their families and culture when making adoption and foster care decisions.

The case was argued Jan. 22 in front of the full circuit. It’s awaiting decision.

Briefs were strategized “just like a Supreme Court case,” Kanji said, “highly coordinated and a lot of outreach to good people to write the briefs.”

Michigan State law professor Kathryn Fort was one of the lawyers on the Fifth Circuit briefs.

“For us, as the tribal intervenors, obviously a lot of other tribes wanted to have a voice in that case, and so the Project was very helpful in coordinating that tribal amicus brief and handling all of the signatories,” she said.

The Project’s Brackeen involvement “is slightly unusual in that we typically don’t get that involved in a circuit case,” Williams noted. “It’s the Supreme Court Project.”

But the case, he said, “and this subject matter, ICWA, has such broad-reaching implications for tribes.”