Call it hypocrisy, tone deafness, or pandering to the authorities in Beijing, the optics are terrible.

Update: About 24 hours after the publication of this column, Mayer Brown announced that it has withdrawn from its representation of University of Hong Kong in this matter. “Going forward, Mayer Brown will not be representing its long-time client in this matter. We have no further comment,” the firm said in a statement, according to The Washington Post.

My job wouldn’t be nearly as fun if big, powerful law firms didn’t keep tripping over themselves.

This time, it’s Mayer Brown that’s up for the “what the hell were they thinking” award. Just a few days ago, it interjected itself in Hong Kong’s struggle for democracy—aligning with the oppressors. Talk about picking the wrong side of history.

Representing the University of Hong Kong, the firm dashed off a letter dated Oct. 7 (tweeted by journalist Xinqi Su) to the leading pro-democracy organization in that region—the Hong Kong Alliance in Support of Patriotic Democratic Movements of China—demanding that it remove a monument commemorating the Tiananmen Square massacre. Known as the “Pillar of Shame,” the 8-meter statue by Danish artist Jens Galschiøt has stood on the university’s campus for a quarter of a century, becoming a powerful symbol of Hong Kong’s defiance in the face of Beijing’s authoritarian rule. An unsettling depiction of 50 contorted human figures, the work memorializes the brutal crackdown of the pro-democracy movement in Beijing on June 4, 1989 in which hundreds, some say thousands, of protesters were killed.

First, let me say that I don’t fault any firm for taking on a controversial client or case. I know the drill: Everyone is entitled to legal representation. Plus, law firms are in the business of making money—and that’s fine.

That said, why would a top firm want to associate itself with crushing a symbol of freedom? As a billing matter, that letter probably netted a pittance. But in terms of public relations, it could cost Mayer Brown some valuable capital.

For China watchers and human rights advocates, Mayer Brown’s role has sparked outrage. So far, about 30 NGOs have signed an open letter asking that the firm resign from its representation in this matter. 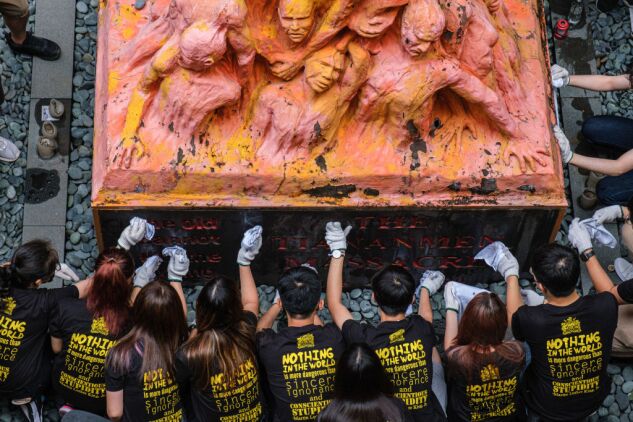 “This is a U.S. firm that’s complicit in the suppression of human rights,” says Dennis Kwok, a former member of the Hong Kong Legislative Council and prominent opposition leader to China’s rule. A barrister trained in the U.K. who’s now a senior fellow at Harvard’s Kennedy School, he adds, “It’s not good enough for them to say that they’re just acting as lawyers.”

“Criminal defendants are entitled to representation, but this is not a criminal case,” says Sam Bickett, a former Ropes & Gray associate and Bank of America Merrill compliance director in Hong Kong who’s had his own problems with Hong Kong authorities. “Every global firm in this city has had to carefully thread the needle these past two years of maintaining a Hong Kong presence while avoiding getting roped into the government’s legal and human rights abuses, yet Mayer Brown appears to have dived in headfirst.”

What’s weird is that Mayer Brown has been in similar hot water before. In 2014, I wrote about the firm’s “uncomfortable” clients—deniers of the existence of “comfort” women—Korean, Chinese, and other Asian women who were forced into sexual slavery by Japan during World War II. The plaintiffs, who were of Japanese descent, had sued the city of Glendale, California to remove a statue commemorating the women. The plaintiffs said they were “offended” by the statue, calling it “an unfairly one-sided portrayal of the historical and political debate surrounding comfort women.” (The firm eventually withdrew from that case.)

At that time, I asked: “Why on earth did Mayer Brown take on this case?” And here I go again.

Asked for comment on this current engagement, a Mayer Brown spokesperson emailed me: “The University of Hong Kong is a long-standing client of the firm. For many decades, lawyers in our Hong Kong office have represented the University in numerous areas, including real estate matters. In accordance with our policy of not discussing private client matters, we have no additional comment.”

But in an exchange with Hong Kong Free Press, the firm said that its role is to “help our clients understand and comply with current law.” It added, “our legal advice is not intended as commentary on current or historical events.”

Not to state the obvious but isn’t participating in the removal of one of the last monuments to democracy in China a form of commentary?

You’d think that the authorities could just bulldoze the monument without a demand letter.

The firm’s advocacy in this matter inevitably opens it up to charges of hypocrisy. Like all big firms, Mayer Brown makes a fuss about its commitment to social justice, ESG (environmental, social, and governmental considerations), and other wonderful causes. And to be fair, the firm seems to be engaged in good works, including winning pro bono awards in Asia for helping refugees and the needy. But now, as China’s brutal clampdown on Hong Kong is almost complete, it suddenly appears to be waving the flag of authoritarianism.

Let’s just say the firm’s message is muddled. Which brings us to this question: Who’s minding the store? Was this engagement the act of a solo partner or was this vetted by a committee? (Note: The letter doesn’t carry an individual partner’s signature—and no one is claiming authorship.)

Call it what you will—hypocrisy, tone deafness, pandering (the firm also has offices in Shanghai and Beijing) or sheer ineptitude—the optics are terrible.

Which is a tad ironic because the firm touts its expertise on the intersection of business and human rights. Its website states: “An effective human rights compliance program is emerging as essential to effective risk management, regardless of sector. Drawing on the best of the policies and procedures that many businesses have already adopted and our experience, knowledge and global reach, Mayer Brown guides clients through this increasingly complex, evolving and international aspect of doing business.”

(Updated with Mayer Brown announcement that it is no longer working on the matter.)