O’Melveny & Myers is opening up an office in Austin, Texas with four lawyers from Thompson & Knight as Big Law firms continue to expand into the Lone Star state.

Los Angeles-founded O’Melveny’s move to establish a presence in Texas is “a natural extension of what we were doing anyway,” said firm chair Bradley Butwin in an interview with Bloomberg Law.

O’Melveny has long represented some of the state’s largest companies in significant cases and transactions, Butwin said.

Butwin said the Austin market is a good match for O’Melveny, particularly with the work available there on mergers and acquisitions, private equity, patent and other litigation, and project development.

Austin has become an expansion target for several Big Law firms as they look to capitalize on the legal talent in the city as well as its robust technology, energy, and private equity industries. DLA Piper, King & Spalding, Orrick, Herrington & Sutcliffe, Shearman & Sterling, and Wilson Sonsini Goodrich & Rosati all have offices in the city, along with longstanding Texas firms like Jackson Walker, Baker Botts and Norton Rose Fulbright.

Quinn Emanuel Urquhart & Sullivan launched its office in Austin in early 2021, picking up two partners from McKool Smith and Scott Douglass & McConnico. Kirkland & Ellis in April announced that it would be opening an Austin, Texas office with more than 20 lawyers, most of whom would relocate from the firm’s other offices. 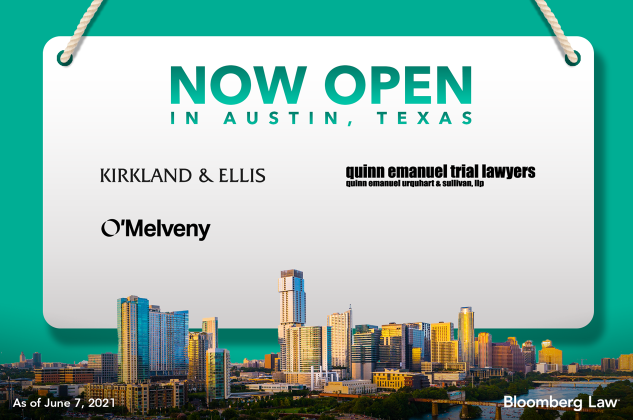 McDermott Will & Emery head of strategy Michael Poulos recently told Bloomberg Law that the firm is actively looking to open an office in Austin by the end of the year.

The group of lawyers joining from Thompson & Knight specialize in energy-focused work and their practices encompass project development, acquisitions, infrastructure, energy transactions, federal and Texas state regulatory and administrative law, and litigation. The group joined Thompson & Knight in 2014 from Houston-based Andrews Kurth, which merged with Hunton & Williams in 2018.

Dallas-based Thompson & Knight announced in April that it was in merger talks with Florida-founded Holland & Knight. The tie-up, expected to be completed this summer, would create a nearly 1,600 lawyer firm.

Oldham said the proposed merger played no role in his decision to join O’Melveny. He said his team had been looking for some time for a firm with stronger technology-related practices.

“The intersection between technology and energy really has never been stronger and O’Melveny just provides a tremendous platform in the Texas market because of that,“ Oldham said.

O’Melveny anticipates adding more lawyers in Texas, including in M&A, intellectual property, and labor,, to service a broader set of clients outside of just the energy space, according to Butwin, who said Austin’s fast-growing tech market dovetails with what the firm is doing in Silicon Valley, San Francisco and elsewhere.

“This is the first step,” Butwin said of Monday’s hires.

(Updated with comments from Butwin and Oldham throughout)