A group of tech giants, echoing Amazon founder Jeff Bezos and the CEO of Lyft, is pushing for something companies almost never ask for: higher taxes.

The Chamber of Progress—a group of Silicon Valley companies that launched in March to counter some of the anti-tech undercurrents on Capitol Hill by courting Democrats—is advocating for a higher corporate tax rate, which President Joe Biden recently proposed hiking to 28% from 21%.

This isn’t what corporate trade groups are expected to do. But the Chamber, whose “corporate partners” are Amazon, Google, Uber, Lyft, Facebook, Twitter, and a handful of startups, describes itself as “not just another business group.”

It is generally an easy stance for them to take, corporate tax professionals say, noting that these companies often don’t pay anything remotely close to the statutory rate now. That is thanks to the substantial losses that most tech startups incur in their early years, the ease with which the sector can shift intangible property like patents abroad, and ample credits for research and development, among other benefits that whittle down the companies’ effective rates.

While these companies may publicly back a corporate rate hike, they will likely combat other White House corporate tax proposals on the back end, tax professionals say. Those proposals include a tax on the income reported on financial statements, a minimum tax on global income, and changes to the 2017 tax law’s international regime that eliminate the carrots and sharpen the sticks.

“Companies might, at the end of the day, have figured this is the path of least resistance: We’ll accept the tax rate increase, which will make us look good for public consumption, but then we’re going to fight like hell to narrow or reduce the tax base,” Robert Willens, a New York-based tax consultant, said.

The effective tax rate is the actual rate at which a company is taxed after a series of adjustments to its balance sheet, like dollar-for-dollar reductions in taxes from credits for research and taxes paid to overseas jurisdictions, or deductions of income so that it’s no longer taxable. The effective rate can differ from the statutory corporate rate of 21%, which the 2017 law lowered from 35%. 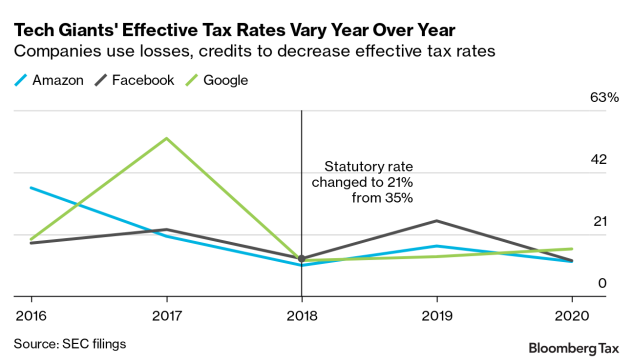 “I believe that if you ask the average Silicon Valley leader if they’re willing for their company to pay slightly more in taxes in order to support investments in clean energy, broadband, job training, and manufacturing, most of them would say that’s a fair deal—and good for the country,” said Adam Kovacevich, the founder and CEO of the group, who’s worked for Google, Lime, and former Sen. Joe Lieberman (I-Conn.).

Kovacevich’s comments, first published in a Medium post in April, come as large corporations are picking their corporate tax battles among an array of punitive proposals from Democrats.

Spokespeople for Facebook and Getaround expressed in separate statements that the companies are affiliated with external groups like the Chamber, but they don’t necessarily endorse their positions on public policy issues.

José Castañeda, a spokesperson for Google, said in an emailed statement that the White House tax proposals “merit further discussion” and that the search giant wants “a continued focus on U.S. competitiveness globally” and favors “U.S. leadership for a new international tax agreement that supports much-needed investments for America’s economic future.” He declined to comment further. 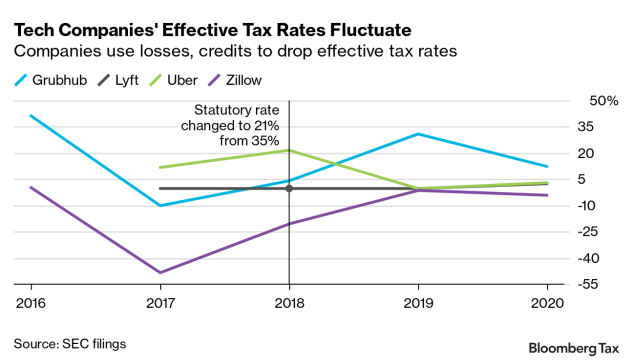 Bank of America analysts estimated that the full Biden tax plan would cause the after-tax earnings of a handful of internet companies including Amazon, Facebook, Google, and Twitter to fall by around 7% on average. Major factors for those four included the elimination of a write-off for foreign-derived intangible income and the tax on financial statement income, the analysts wrote in a late April report.

When companies have large amounts of unused tax benefits they carry forward year to year—known as “deferred tax assets” and often composed of losses and credits—an increase in the corporate tax rate makes those assets more valuable. A $100 million loss deduction is worth $21 million in reduced taxes under the current corporate rate, for instance, and $28 million in fewer taxes under the rate proposed by the White House.

In its most recent annual filing, Uber reported federal losses it shifts from year to year of $13.6 billion, while Lyft reported $6.2 billion. Zillow, another member of the Chamber, reported $1.7 billion as of the end of 2020. Twitter reported $2.19 billion in federal losses. Google’s parent company, Alphabet, disclosed $3.1 billion.

Even when startups become profitable, they tend to have huge historical losses they shift forward year after year to offset their taxes. Some companies—including Alphabet, Zillow, Lyft, Uber, and Twitter—establish what’s called a “valuation allowance,” which is essentially accounting jargon for storage of tax benefits a company doesn’t think it will be profitable enough to ever use.

When companies make changes to their valuation allowances—adding to or releasing some of the tax benefits they have put away because they don’t think they will make enough profits to use them—this can lead to huge fluctuations in their effective tax rates, as has been the case for Twitter. 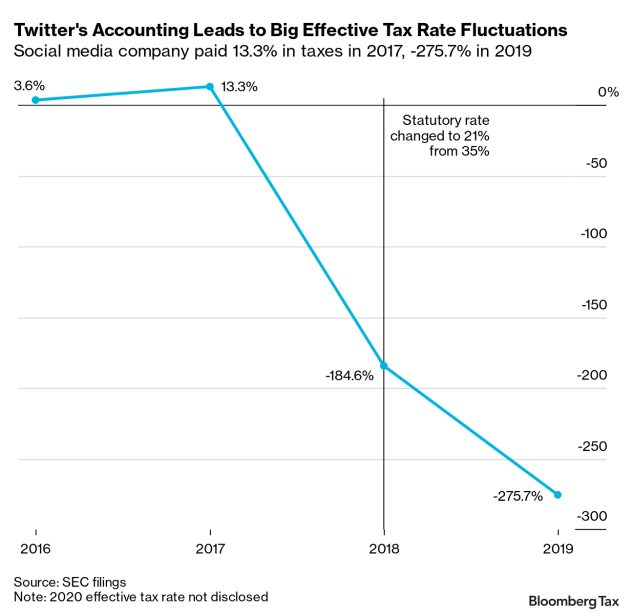 “The statutory rate does not really matter for unprofitable companies,” said Patrick Badolato, a senior lecturer in the accounting department of the University of Texas at Austin McCombs School of Business.

Companies with large deferred tax assets, Badolato said, “don’t have to pay taxes until they’ve made enough profits to offset their historical losses,” and “it could be quite a few years and even different legislative bodies before many of these companies are paying any meaningful amount of taxes.”

Companies like Facebook and Google have flexibility as to where to locate their intellectual property and their use of tax credits, which can push down their effective tax rates, Badolato noted. Amazon, flush with credits for research and development and deductions for stock-based compensation, has low profit margins and reinvests what it makes in R&D and expansions each year, driving its tax rate to depths that have made the e-commerce giant a target of progressive ire.

“A higher corporate tax rate makes it a lot harder for a medium-sized retailer to stay in business,” he said.

Facebook, Uber, and Google have reported lobbying on international tax issues since the crafting of the 2017 tax code overhaul, disclosure forms show, indicating that they have an interest in swaying Democrats who plan on tightening that international regime as part of an infrastructure plan.

It would be surprising if Amazon, Uber, and Facebook, and to a lesser extent Twitter and Lyft, didn’t approach the House committee responsible for tax policy in the next few months to talk about how the White House proposals affect them, said a House staffer, speaking on the condition of anonymity.

Companies don’t like to come off as unreasonable by rejecting proposals outright, the staffer continued—they want to offer some kind of solution, depending on their financial profiles.

When tax legislation is “afoot,” companies are always around the corner and want to be heard, said Todd Simmens, a former legislative counsel to the Joint Committee on Taxation who is now a national managing partner for accounting firm BDO.

“I can imagine that these firms are going through some sort of calculus,” said John Gallemore, an associate professor of accounting at the University of Chicago Booth School of Business who focuses on corporate taxation.

Gallemore added that he sees the group of companies as “pandering” to politicians.

“If they just come out and say they’re behind a higher rate, they’re able to maybe negotiate or lobby behind the scenes, or push back on some of these changes they’re maybe less enthused or excited about,” he said.

To contact the editors responsible for this story: at pambrosio@bloombergtax.com; at csaenz@bloombergindustry.com