Running the legal department for a large public-private partnership has required New York Public Library General Counsel Michele Coleman Mayes to carefully consider spend when she taps outside help for matters that range from digitizing books to managing a complex real estate portfolio.

“You need to be judicious and smart about how you spend your hard-earned money. Somebody once asked, ‘How many hamburgers does McDonald’s have to sell to hire a lawyer?’ That kind of puts it in perspective,” said Mayes in an interview.

Mayes had decades of experience working with outside counsel in the corporate world before she joined the Manhattan-based NYPL in 2012. She was general counsel at Allstate Corp. and Pitney Bowes Inc. and began her in-house career at Colgate-Palmolive Company. Mayes has become a noted advocate for diversity in the profession over the course of her career.

Mayes spoke with Bloomberg Law about the New York Public Library’s role as a public-private entity, how that structure affects her small in-house team’s work with outside counsel, and the significance of having a library card growing up.

Bloomberg Law: NYPL is the second-largest public library system in the U.S. and the fourth largest in the world. Can you explain the structure of this massive system and how you get your funding?

Michele Coleman Mayes: The best way to think of it is a public-private partnership. We are a 501(c)(3) and have been since we were created, but we get over 60% of our funding from the city of New York. We also get some funding from the state and a small amount of funding from the feds.

We have both a circulating library and a research library, and that is what makes us extremely distinct among libraries in this country. We privately raise money for our four research institutions. They are not supported, for the most part, by public funds. We have a $1.3 billion endowment, and a whole set of lawyers also oversees the work for that. We have our own staff that manage the investment of that money because that’s the money that we draw from annually to help support the research libraries.

BL: You have three other lawyers on your team at the moment, though the library has over 90 branches. Does that mean you lean heavily on outside counsel?

MM: You can’t spend all the money you collect. That’s true even if you are a public company. You need to be judicious and smart about how you spend your hard-earned money. Somebody once asked, “How many hamburgers does McDonald’s have to sell to hire a lawyer?” That kind of puts it in perspective. If I divert money to law firms, that really is something that is looked upon under a microscope. We do hire lawyers, particularly in the labor and employment area. We go to Venable for most of those questions, which was really critical in this time of Covid.

The other law firm that we use regularly, believe it or not, is on real estate and construction, and that’s Tennenbaum. We have a very complex real estate portfolio here, and it includes all buildings that are leased from the city, and it includes property that that is leased from private landlords. All of that is always swirling around, either negotiating leases, or dealing with construction because the buildings have to be maintained, they have to be upgraded. Some of our properties had fallen into, let’s just say, a less than desirable state, so for the last several years we have been on a tear trying to correct that situation so that our branches are attractive to our patrons. And that takes a lot of money.

We occasionally use Paul Weiss on some real estate matters, but those are pretty complex. We have properties where we’re a commercial condo owner, and we’ve generally gone to Paul Weiss for those transactions because they have a partner on staff who is extremely knowledgeable about commercial condo law in New York. 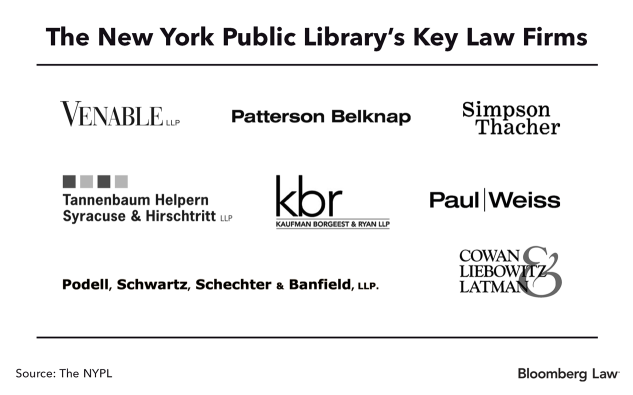 BL: Has the pandemic affected how the library operates and the work you’ve been doing?

MM: Digitization is something that has worked really well which the library has really embraced out of necessity, but it paid off big dividends because of Covid. Even though we’re not Google, or Amazon, or Microsoft, people do expect us to keep up with the pace of technology, and so we’ve had to figure out ways to embrace digitization without breaking the bank. We were able to develop a software platform called SimplyE, where you can download books and never have to come into the library.

We put a lot of effort into it. We partnered with NYU Law School’s Technology Law and Policy Clinic and a professor there along with several of his students. Over the course of many semesters, they worked with us on a lot of the complexity around creating open source software, so I was able to get that pro bono, though the students that were getting credit, but they did a lot of heavy lifting with my staff. And I did not pay for outside counsel to do that.

BL: Did that digitization lead to any privacy or security issues for you?

MM: We have to go to great lengths to make sure that the technology that we’ve decided to use cannot easily be hacked or in some way compromise the confidentiality of what patrons are doing. We’ve gone to outside counsel on privacy issues, though there isn’t somebody we have on retainer. But periodically, an issue will arise where we want someone who’s an expert, and we will turn to them as needed.

BL: Do these law firms, or any others that you might occasionally retain, ever offer you discounts or special fee arrangements because of your 501(c)(3) status?

MM: Our operating budget is about $360 million. That’s a fairly large amount of money for an institution like this, and the majority of it comes from taxpayer dollars, and we fundraise the rest of it. The firms that I’ve named, they will give us a discount, but we are not viewed as destitute.

There are two other library systems within the city, Queens and Brooklyn, and they have been much more adept at getting firms to work for them on a pro bono basis. Forget the discount—pro bono. I have a few firms that have done work for us and they’ve done it pro bono, but that’s the exception.

Chloe Wasserman is the general counsel for the Brooklyn Public Library, and I said to her, “How in the heck do you get law firms to work for you without charging you?” Chloe then told me she goes to the pro bono area of New York Lawyers for the Public Interest. She describes whatever project she needs help on, and then they help match her with a law firm willing to undertake this task on a pro bono basis. I’m now exploring that, but I don’t know how much luck I’m going to have because I’ve got a $1.3 billion endowment, so a firm could look at us and go, “You’re not for profit, but not really.”

BL: Why did you join the New York Public Library as general counsel after so many years working in the corporate world?

MM: This institution was particularly intriguing because it’s a library. Everybody—or at least most of my colleagues—probably have memories that they can recount with great fondness about growing up in their different communities and going to the library. It’s almost like a rite of passage when your parents tell you, “We’ll go to the library, and you can take out a book, and it’s with your library card, and it’s under your name.”