Michael’s Apparel, a family-owned clothing business located in the Lake Street commercial district in downtown Minneapolis, was cleaned out by lawbreakers during the riots following the May 25, 2020, death of George Floyd.

“I basically watched them on camera,” said Joe Williams, the shop’s owner. “They broke in, they were snatching stuff off the walls. They pulled up in a car and popped the trunk. One guy came in and changed clothes and left his old clothes.”

Williams and other retailers, along with executives who typically work in downtown Minneapolis, are bracing for the start of the criminal trial of former city police officer Derek Chauvin, charged with second-degree unintentional felony murder and second-degree manslaughter involving Floyd’s death.

Jury selection begins today and is expected to last up to three weeks. Opening arguments for the trial are scheduled to begin March 29.

Cement barricades topped with spools of razor wire now safeguard the Hennepin County Government Center, where the trial will be held. Blocks of a busy street near the government center have been temporarily closed to traffic, access to the Minneapolis City Hall will be restricted during the trial, and the state Capitol in neighboring St. Paul has been caged by fencing since riots rocked the Twin Cities following Floyd’s death.

Minneapolis suffered as much as $500 million in damage due to looting and arson in the days immediately following Floyd’s death. Almost a year later, some of the same businesses that were damaged are preparing as best they can to absorb the trial’s impact on the city.

“We know that many business owners are concerned about the potential for civil unrest. Hundreds of businesses along Lake Street were impacted by demonstrations last year, resulting in hundreds of millions of dollars in collective damage,” said Allison Sharkey, executive director of Lake Street Council, a nonprofit organization representing businesses located on the busy Minneapolis commercial thoroughfare. “Many of them were small businesses that are still working to reopen.” 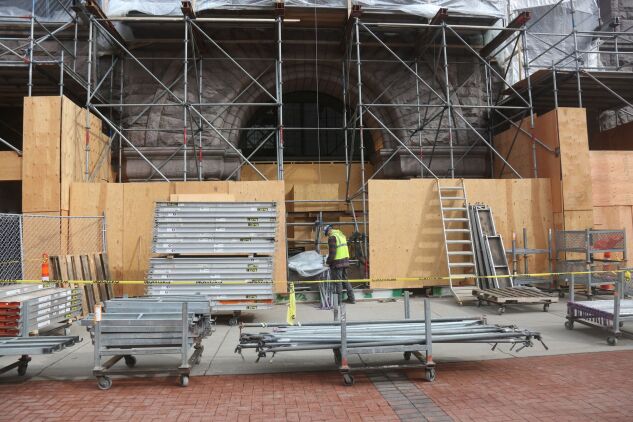 A worker secures plywood to the exterior of the Minneapolis City Hall, which is being boarded up, on Feb. 26, 2021.
Photographer: Emilie Richardson/Bloomberg

employs about 8,500 workers in downtown Minneapolis, the largest workforce in the city’s business district, according to the Minneapolis Downtown Council.

The downtown’s other large employers include , Hennepin Healthcare Medical Center, , and Yet many workers are telecommuting due to the Covid-19 pandemic, leaving the city’s center emptier than usual and limiting disruption to offices as the trial commences.

“The majority of our headquarters team have been working from home since last spring, and will continue to do so through the fall,” Target spokeswoman Jenna Reck said in an email. “For our headquarters and store teams members currently working downtown, we’ve communicated to them about the start of the trial, shared that we’re monitoring closely, and let them know we’ll reach out if there’s any impact to our business.”

“Businesses might think about physical measures to barricade their storefronts,” Hansen told reporters. “We are not recommending people to board up, but each business will have to make its own decision. And if they do choose to take those security measures and precautions, we’re here to help them.” 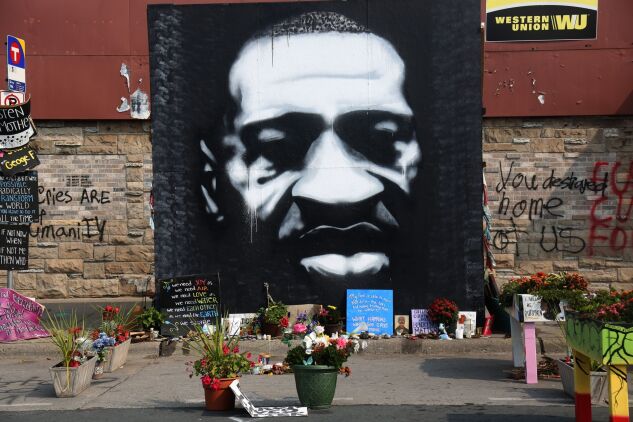 Businesses electing to hire private security firms should contract only with licensed entities to ensure workers are properly trained and bonded, Hansen said.

Because of the pandemic, even lawyers who typically work in the courthouse vicinity are visiting their offices infrequently, so added security surrounding the televised trial isn’t affecting their day-to-day schedules.

“We’re not changing what we are doing at this point,” said Dorsey & Whitney LLP spokeswoman Jeri Longtin-Kloss. “If something does happen, we will change and tell people, ‘Okay, it’s not safe, we’re shutting down the office, don’t come in.’ But at this point it’s operations as normal.”

Her firm’s offices are down the street from the courthouse and, though the courthouse is closed to anyone not involved with the trial, lawyers continue to file documents electronically and participate in virtual court hearings, she said.

Organizers of Operation Safety Net, launched in July to coordinate local and state efforts to maintain the peace during the trial, are prepared to deploy as many as 1,100 police officers from 12 jurisdictions from around the state to quell any civil unrest, Minneapolis Mayor Jacob Frey told reporters last week. An additional 3,000 National Guard troops are prepared to deploy in the Minneapolis-St. Paul region, National Guard spokesman Scott Hawks said in an email.

The aim of Operation Safety Net is to prevent people from getting hurt and any property from being damaged while allowing individuals to exercise their First Amendment rights and peacefully protest, Minneapolis Police Chief Medaria Arradondo told the City Council last week. Developing the plan to safeguard life and property is concentrated on the time of the trial’s closing arguments and verdict announcement, he said.

Arradondo and Minnesota Department of Public Safety Commissioner John Harrington said they are confident police and other public-safety personnel are better prepared than they were at the time of Floyd’s death.

But Jeremiah Ellison, Minneapolis council member representing Ward 5, said, “I think it will depend on the city’s ability and the police department’s ability to maintain their composure. If we de-escalate I believe the situation will remain calm. If we don’t, and we have a history of not de-escalating, then I think we will create room for a lot of chaos,” he said.

More than a dozen organizations plan to protest outside the courthouse today. Minneapolis residents continue to mourn Floyd’s death, but many city residents are angry more hasn’t been done by the city to prevent additional deaths allegedly at the hands of the Minneapolis police, said Dave Bicking, a Communities United Against Police Brutality board member.

“I think anger dominates. Certainly there is some fear from all that’s happened, and some trauma, and the trial is going to bring that all up again,” said Bicking, whose group helps provide legal assistance and support to victims and families harmed by police-involved violence.

“The police are saying we’re the violent ones and they have to lock down the city and turn it into an armed camp,” he said. “But the violence that started this was the killing of George Floyd and then the violence of the police in their response to that.”

Williams, who owns the clothing store owner on Lake Street, said he hasn’t done much on the security side. “I’m not going to board up or anything. I guess there’s not really that much I can do. All I can do is pray for justice,” Williams said.

“If this guy is found not guilty I believe America, not just Lake Street, is in trouble,” Williams said. “I’m praying for the country.”