President Donald Trump pauses while speaking to members of the media on Aug. 2, 2019.
Photographer: Andrew Harrer/Bloomberg

Judges appointed by Republican presidents outnumber their colleagues tapped by Democrats in a majority of federal appeals courts after President Donald Trump flipped a circuit for the third time.

Senate confirmation of Barbara Lagoa by a vote of 80 to 15 on Nov. 20 gives Republican appointees a 7 to 5 advantage on the Atlanta-based U.S. Court of Appeals for the Eleventh Circuit.

Lagoa’s confirmation also raises the number of appeals courts with a majority of Republican appointees to seven. There are 13 circuits.

While a president’s political affiliation isn’t an indicator alone of how a judge might rule, it reflects what a president wants in an appointment. Trump has moved aggressively to reshape the federal judiciary with conservatives in just under three years.

So far, he’s appointed 48 judges to circuit courts, which are the last stop for virtually all federal appeals. Barack Obama appointed 55 over two terms. 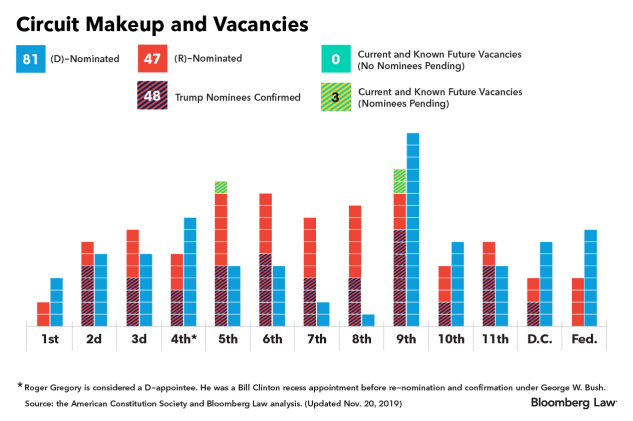 Trump also has appointed 112 judges to district courts, and he’s also placed Brett Kavanuagh and Neil Gorsuch on the Supreme Court. The administration is currently racing to surpass 180 total judicial appointments in the next couple of months.

Lagoa’s resume also includes experience as federal prosecutor in Florida and a lawyer for Greenberg Traurig. In her confirmation hearing she said her judicial philosophy is to “apply the rule of law to the facts of the case,” but she looks at the law as is written to derive its meaning.

The flip in the Eleventh Circuit is the third such changeover under Trump. The Pennsylvania-based Third Circuit flipped in March, followed by the New York-based Second Circuit last week with the confirmation of White House lawyer Steven Menashi.

The Eleventh Circuit—which covers cases arising in Florida, Alabama, and Georgia—is an important venue for election law and will likely maintain that status as it’s likely to hear several more cases making their way through the pipeline.

(Adds details in last paragraph on 11th Circuit states, and as a venue for election law.)