Mortgage lenders are seeking an industry-specific exemption to one of the Biden administration's tax proposals, warning of unintended consequences on the housing market.
Photographer: Luke Sharrett/Bloomberg

The mortgage industry is pushing Congress for a carve-out from part of the Biden administration’s corporate tax plan, cautioning that a tax hike on the biggest lenders would trickle down to borrowers in the form of higher mortgage rates and fees.

President Joe Biden’s proposals include a 15% minimum tax on book income, the pre-tax earnings corporations publicly report to investors on their financial statements. The book tax is aimed at very large corporations that end up with little-to-no taxable income some years.

The Treasury Department projected the book tax would only hit about 120 companies with annual book income of $2 billion or more. Some tax professionals say the financial institutions that would pay it are so large that it would likely have a limited impact on borrowers and small lenders.

But lenders warn that the unique landscape of the mortgage market—where smaller lenders originate loans, then sell them off to much larger financial institutions that service the loans—would face unintentional damage from a book tax. Their message to the Hill: an industry-specific exemption for mortgage servicers is needed to protect lenders and borrowers they say aren’t the targets of the administration’s proposal.

“Oddly enough, in my opinion, the person that gets hurt most by this is the little guy,” Flaherty said.

The mortgage industry is generally divided into two parts: origination and servicing. Origination is the process of underwriting the loan, while servicing is interfacing with the borrower to collect payments.

To de-risk their balance sheet, originators can sell loans on the secondary market to an entity like Fannie Mae, Freddie Mac, or a big bank. The company that services the loan generates book income that is reported to investors, but the company doesn’t actually have taxable income until borrowers pay it off, usually in monthly installments.

Industry players argue that any pressure on profits—including the imposition of a book tax—would make it harder to sell off mortgages, and thus make it more difficult for lenders to keep originating new loans in what has been a hot housing market.

New loans shot up nearly 19% between March 2020 and 2021, providing a flood of new mortgages on the secondary market, according to data collected by mortgage data tech company Black Knight Inc. 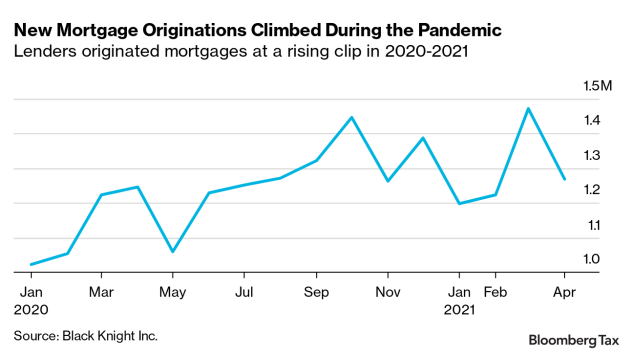 “That’s really what’s been driving the markets,” Reading said, noting that the low interest rates “are the only thing really keeping affordability in check.”

Median home prices jumped 9% from April to October last year, according to the Federal Reserve Bank of St. Louis. 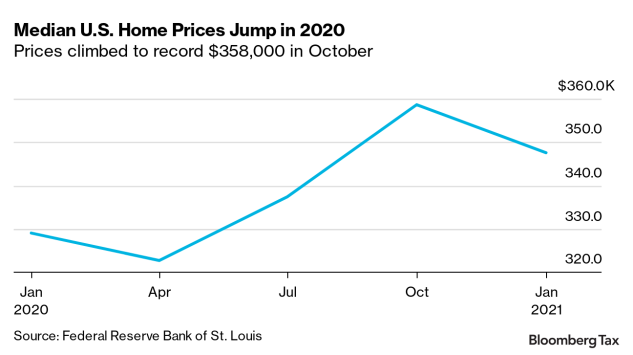 Reading posited that if rates go up, the 4% threshold is where buyers may feel “sticker shock” in the current market, potentially lowering demand.

The average 30-year fixed mortgage rate is still hovering near historic lows at 2.78% as of Thursday, according to the St. Louis Fed.

The increased cost of servicing mortgages could also trigger volatility in the market, which would hurt smaller lenders, said Bill Killmer, senior vice president for legislative and political affairs at the Mortgage Bankers Association.

The “cleanest way” to address these potential consequences is to exempt mortgage lenders and other similar entities who might be impacted from the minimum book tax, said Killmer.

But critics argue the basket of companies the proposal aims to affect are so massive that costs would be diluted across the organization’s other business lines, having little or no effect on mortgage lending.

Thomas O’Rourke, a tax partner for California-based accounting and consulting firm Haskell & White, said the proposed tax is unlikely to have a large impact on mortgage originators because the tax would be applied when the loan is repaid—and mortgages are usually paid in monthly installments.

“I don’t see it as damaging as the mortgage lenders are saying,” O’Rourke said.

“I’m not a fan of paying tax, but if they’re gonna pay on their financial statements, theoretically, those aren’t the companies that are getting away with not paying,” O’Rourke said, referring to smaller mortgage lenders.

The Mortgage Bankers Association said they are in talks with lawmakers on the Hill, including Senate Finance Chairman Ron Wyden (D-Ore.) and House Ways and Means Chair Richard Neal (D-Mass.)

Wyden’s office declined to comment for the story. Wyden has been working on other tax code changes that could be options for a large economic package, including limits on a deduction available to pass-through businesses and changes to the taxation of unrealized capital gains.

The maneuvering comes as the White House is working on a two-track plan to advance Biden’s tax-and-spend agenda. A tentative bipartisan deal is in flux, while Democrats are working out the details of a $3.5 trillion package intended to advance via the budget reconciliation process, a tool that would avoid a Senate filibuster.

The proposal would likely have an effect across multiple industries, Zarlenga said, especially energy, airlines, and other sectors that take advantage of accelerated depreciation deductions. There are also many open questions on how the book tax would work in practice, she said.

“I think it’s going to run up against some hurdles because of that,” she said.

—With assistance from Kaustuv Basu.

(Updates with data on interest rates in 15th paragraph. A previous version of this story corrected the company's name in the 10th paragraph and first graphic.)