So Benz, a partner at Wheeler Trigg O’Donnell, suggested her firm convert one of its empty, windowless offices into a studio with professional lighting, a mini-lectern, and an adjustable desk. A few books and plants fill the shelves, a backdrop carefully curated by Lisa DeCaro, a trial consultant and former actress, who warns fluorescent lights and white walls “can look like a mug shot.”

Attorneys and their firms across the U.S. are adapting their workspaces—and polishing their on-camera presentation skills—in response to the rise of virtual court proceedings necessitated by the pandemic.

“There’s a physiological effect of going into a courtroom and going someplace else to do your in-court presentation that’s missing when you’re sitting in your basement or spare room,” Benz said.

Kirkland & Ellis is installing cameras to avoid bad angles in its new office in Dallas, while Latham & Watkins has a virtual “observation deck” where lawyers watch colleagues conduct remote court proceedings in real-time.

Moving from in-person to online requires litigators to rethink their whole approach. No longer is the courtroom a stage; instead, remote proceedings mean lawyers are performing on-screen.

You sort of have to “channel your inner Oprah,” Dallas-based litigator Amy M. Stewart told Bloomberg Law. “It’s a production, not a presentation.” 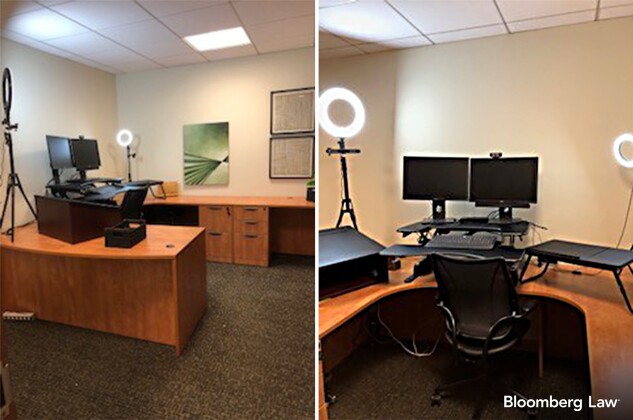 At the outset of the pandemic, lawyers and courts were in triage mode learning the basics of remote work. But as courts developed systems for video hearings and conferences, consultants like DeCaro started getting calls for help.

“I would spend the first half hour of every meeting trying to rearrange their office,” said DeCaro, who runs her consulting business, Courtroom Performance, with her husband.

Initial advice would be as basic as instructing a lawyer to move their camera to eye level, and make sure their face was in good light. “All of those things were new to people back in June,” she said.

Some of the changes forced by the pandemic will be important for years to come, as courts signal the use of video in certain types of proceedings could continue long after a vaccine is distributed.

“It is such a new environment that people are saying, ‘I don’t have the skills or the new knowledge about what to do,’” said Gabriel.

“It’s like directing a movie instead of putting on a live play,” said Michele Johnson, a partner at Latham & Watkins, and global chair of its Litigation & Trial Department.

Latham set up an internal website for attorneys with resources for virtual litigation. It includes information on operations from courts across the country, and presentations with tips on virtual setups—like putting your papers near the camera so you don’t break eye contact, Johnson said.

“Being a courtroom lawyer is about relationship building, it’s about rapport, it’s about connection, and all of that changes when you’re remote—or it can change,” she said. “I think adapting to making those kinds of connections as smoothly and seamlessly is possible is a key skill.”

Latham also developed what Johnson called a virtual “observation deck” where lawyers can watch live streams of colleagues in court across the country. “It’s like a mentoring opportunity, and when we’re not all together, those mentoring opportunities can be challenging,” Johnson said.

Not only do you need to build-in time for technical mishaps, you need to spend time polishing your on-camera presence, said Stewart, noting that some jurors could be watching the evidence unfold on the same screens they use to watch Netflix.

And juror expectations for production value and “on-screen” performance are high. Stewart said she tried to think of it as a talk show in terms of finding ways to engage jurors.

Stewart said she’s always been pretty comfortable in front of a camera. She played basketball for Wake Forrest, and the games were filmed. She had to watch herself play and critique her performance, so she is accustomed to the exercise.

Stewart said she even thought of becoming a sportscaster before she decided to pursue law.

Offices That ‘Work for Zoom’

Video preparedness is already making its way into future plans. Kirkland & Ellis is keeping video and audio technology in mind for a new Dallas office it expects to move into in 2022.

“One of the things we’ve started to focus on in the course of figuring out what we want to do—that we never would have dreamed about before—is making sure the offices are built around having technology that will work for Zoom,” said Jeremy Fielding, a partner in Kirkland’s Dallas office.

That includes installing cameras that are fixed up high to avoid bad angles, and incorporating studio audio capabilities in the offices, he said.

“There’s a recognition, at least on the litigation side, that world’s never going to be the same again,” he said.

But no matter how good the lighting or sound, remote court has its limits, said District of Maryland Chief Judge James K. Bredar.

“Truth is subtle, truth is complex,” said Bredar. “It’s harder to see the shades of gray in virtual proceedings.”

Bredar doesn’t see virtual jury trials surviving after the pandemic. But he acknowledges some other courtroom changes are here to stay.

“Wars, pandemics, they change culture,” he said. “And there’s no getting around that.”