The female justices at the U.S. Supreme Court, Elena Kagan, Sonia Sotomayor, and Ruth Bader Ginsburg, tend to get interrupted more often during oral argument, even when they speak up early.
Allison Shelley/Getty Images

The female members of the U.S. Supreme Court tend to speak up first during oral arguments, according to research by Bloomberg Law.

Justice Ruth Bader Ginsburg has jumped in first in nearly half of the 22 cases argued at the high court so far this term. Together with Justice Sonia Sotomayor, the two have kicked off the questioning in nearly two-thirds of the high court’s cases this term.

A recent law review article noted that female justices were more likely to be interrupted during oral argument.

Since 2011, Justice Elena Kagan’s first full year on the bench, the women are effectively “being interrupted at approximately two times the rate of the men,” Tonja Jacobi, a professor at Northwestern Pritzker School of Law, Chicago, and Dylan Schweers, an associate at Goodwin Procter LLP, Boston, wrote in the 2017 article.

But Jacobi told Bloomberg Law that there’s little evidence that Ginsburg or Sotomayor are interjecting quickly during oral arguments to avoid being interrupted. The numbers just don’t show much of a relationship there, Jacobi said.

“Ginsburg and Sotomayor both consistently speak early in the argument,” she said. But both are interrupted a lot, Jacobi said.

Kagan tends to speak up later in the arguments and gets interrupted at the same rate. 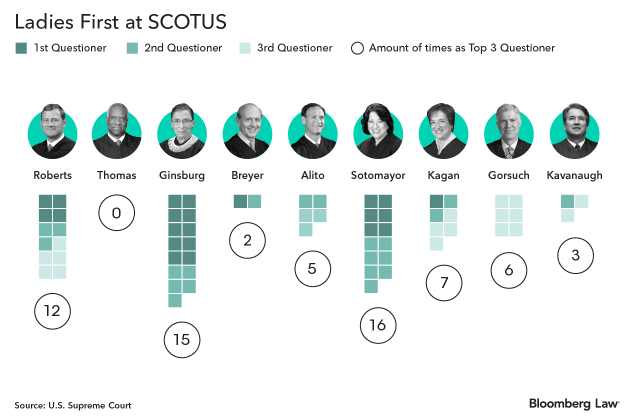 Ginsburg has asked the first question in ten of the court’s 22 arguments so far this term. The only other justices to interject first in more than one argument this term are Sotomayor and Chief Justice John G. Roberts Jr. They’ve gone first 6 and 4 times, respectively.

On the other end of the spectrum, Justice Clarence Thomas hasn’t asked a single question so far this term. Justice Stephen G. Breyer, though often the justice that speaks the most during oral argument, was among the first three justices to ask questions only twice so far this term.

Kagan is closer to Breyer than her female colleagues. She’s gone first only once this term, and been in the first three questioners only seven times overall.

Asking questions first probably makes it less likely that the justice will be interrupted late in the argument by another justice who is concerned about time running low for questions, Leah Litman, a visiting professor in the Stanford Law School Supreme Court Litigation Clinic, said. But it doesn’t eliminate the risk that the justice will get interrupted simply because two justices attempt to ask something at the same time, she added.

Michelle Olsen, of the Appellate Daily blog, noted that asking questions early could be a way for the female justices to avoid interrupting their colleagues.

She said it may be that women are less conditioned to interrupt than men. Still, she cautioned against saying that “all women or men are doing something for one reason.”

Roberts said it’s not just the female justices that get interrupted during oral arguments.

“I don’t know if many of you have seen our arguments and the difficulty of getting a word in edgewise. For the justices, let alone the counsel, it is a serious problem,” Roberts told a group of lawyers at the Fourth Circuit Judicial Conference.

Roberts, who has the role of traffic cop during oral argument, said he has a strict rule to give the right of way to the more senior justice in the case of an interruption, regardless of gender. He said he also takes into consideration other factors such as how long a justice has been talking and how long the justices have been on a certain topic.

Litman suggested that the propensity for justices to ask questions early is probably more about their personality than a desire to avoid interruptions.

And there are several reasons why justices may speak during oral arguments, Josh Blackman, a professor at the South Texas College of Law Houston, told Bloomberg Law.

Justices can be asking the advocates genuine questions about an unclear aspect of the briefing, Blackman said.

On the other hand, “one Justice may ask a question in order to influence another Justice,” he said.

The “justices do not discuss the cases with each other before oral argument, so their questions to counsel are a way to telegraph their views and concerns to colleagues, for the first time,” Olsen said.