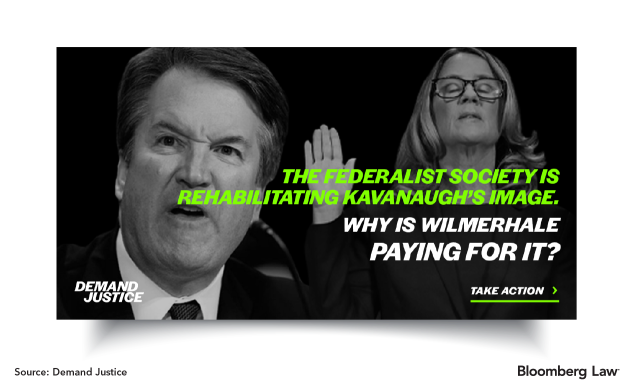 Kavanaugh, making his first major speech since joining the court just over a year ago, received an enthusiastic greeting from most of the attendees. But a handful of demonstrators blew rape whistles at the start of his speech, alluding to the sexual assault allegation from his high school days that nearly derailed his Senate confirmation in 2018, Bloomberg reported.

Kavanaugh said that he went through an “ugly process” during confirmation.

Demand Justice Senior Counsel Katie O’Connor said the Federalist Society “is trying to rehabilitate” Kavanaugh, who she said was “credibly accused” of sex assault and who is now on the high court pursuing a conservative agenda.

“And, they’re using the veneer of legitimacy granted to them by sponsors to do it,” O’Connor said in calling on “people at these firms who really care about ending sexual violence to speak up.”

Kirkland declined to comment on the Demand Justice campaign, while the Federalist Society and the other firms didn’t immediately respond to requests for comment.