In the days leading up to ’s sentencing, President slammed the judge and decried the prosecutors for carrying out a political hit job. At the hearing Thursday where Stone was a prison term of three years and four months, the judge took her chance to fire back.

U.S. District Judge spelled out in vivid detail Thursday why Stone deserved his sentence for witness tampering and lying to Congress during an investigation of Russian meddling in the 2016 election.

“The dismay and the disgust at the attempts by others to defend his actions as just business as usual in our polarized climate should transcend party,” Jackson told the packed courtroom in Washington. 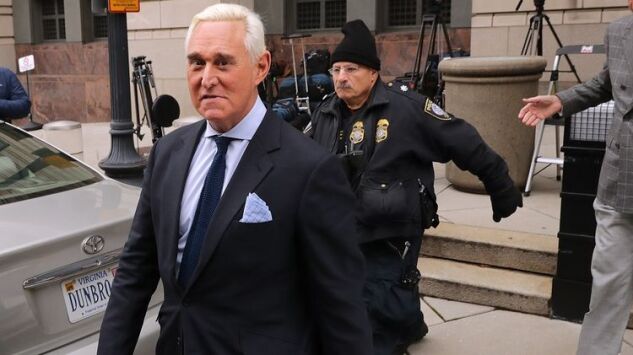 WATCH: Roger Stone was sentenced to 3 years and four months behind bars for lying to Congress and tampering with a witness during the Russia investigation.
Source: Bloomberg)

Jackson then took aim at Trump without naming him, saying she could not be influenced by outside comments attempting to interfere in the case.

The comments “were entirely inappropriate,” the judge said. She implicitly rejected the president’s argument that the prosecution was fueled by opposition to him, saying the “charge had nothing to do with political activity.” The case was simply about Stone’s lies, she said, proved beyond a reasonable doubt largely by his own emails and text messages.

“The truth still exists. The truth still matters,” the judge said. “Roger Stone’s insistence that it doesn’t, his belligerence, his pride in his own lies are a threat to our most fundamental institutions, to the very foundation of our democracy.”

, a former federal prosecutor who teaches at Loyola Law School, said the message to Trump was unmistakable. “She said what what every other judge was thinking, which is that what he did was totally inappropriate,” said Levenson. “She was saying back off.”

While the prison term the judge imposed is far short of the seven-to-nine-year sentence sought by prosecutors in a Feb. 10 memo, Jackson and prosecutor John Crabb took pains to say that recommendation was proper and well-supported under the law. It was revised downward by the Justice Department after Trump criticized it as unfair.

“This sentence is a triumph for the independence of the judiciary and a dark day for the Justice Department’s leadership -- though not the rank and file,” said Christopher Hall, a former prosecutor now in private practice in Philadelphia.

After Trump scorched the earlier recommendation, the original four prosecutors quit the case and the Justice Department submitted a new memo seeking three to four years. The resulting political drama created an uproar that reportedly left Attorney General threatening to resign. It also set up Stone’s sentencing as a test of whether a federal judge would be intimidated.

Jackson, appointed to the bench by President in 2011, and Crabb had only praise for the four original prosecutors on Thursday. The judge slammed “any suggestion” that they had done anything “untoward, unethical or improper.”

The original sentencing memo “was submitted with the same level of evenhanded judgment and professionalism that they exhibited throughout the trial,” the judge said.

For his part, Crabb, who took over the case, said his predecessors acted “in good faith” and affirmed several key elements of the original sentencing memo. He also surprised many who observed the hearing by standing before Jackson and defending a hard line against Stone, a self-described political “dirty trickster” and longtime confidant of the president.

Crabb said the sentence should be imposed “without fear, favor or political influence.” He added: “This prosecution is righteous.”

Jackson said her sentence was based on clear evidence that Stone gave “plainly false” testimony to the House Intelligence Committee about his communications regarding WikiLeaks and third parties tied to its founder . The group released emails during the 2016 campaign intended to hurt Democratic candidate that U.S. intelligence believes were hacked by Russia.

Jackson said it wasn’t Stone’s involvement with Trump that warranted a prison term but his lies about “a matter of great national and international significance” and threats against one of his associates.

(Updates with additional remarks from the hearing)

To contact the reporters on this story:
in Washington at elarson4@bloomberg.net;
in New York at dvoreacos@bloomberg.net