The judge presiding over the first murder trial in George Floyd’s death has argued from both tables on the other side of the bench.

In his career, Judge Peter Cahill has ruled on cases against Black Lives Matter protesters, worked with in the Hennepin County Attorney’s Office, and fought for accused murderers. He prosecuted criminal cases in Hennepin County before he was appointed to the Minnesota state court in 2007. He defended them, too.

Cahill is in command of the trial against a former Minneapolis police officer that may rival the O.J. Simpson trial of 1995 in the level of media attention it receives. Cameras will be streaming the proceedings against Derek Chauvin, who faces second-degree murder and manslaughter charges in Floyd’s death on May 25, 2020.

The trial, which will be the first in the state’s history to be televised in its entirety, has the potential to stoke racial tensions and civil unrest on the streets of Minneapolis. Attorneys who have worked with Cahill and argued before him say the former prosecutor and criminal defense attorney has the experience, demeanor, and temperament to keep the proceedings inside the courthouse on track. 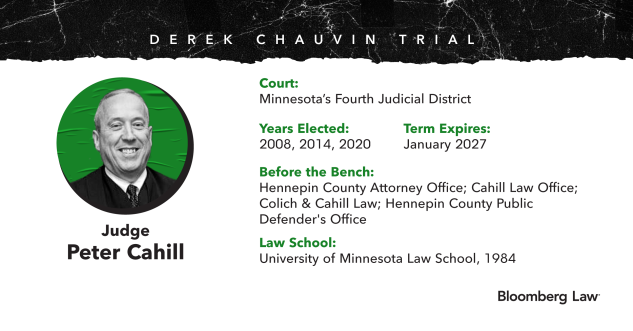 “Emotions will be running so high, and then you layer on what may be going on outside of the courtroom, plus the specter of Covid impacting the proceedings,” said Susan Gaertner, a former attorney for neighboring Ramsey County, who now leads Lathrop GPM’s Investigations and White-Collar Defense team.

“All of that is going to make for likely tensions and very high pressure, but Judge Cahill is up to the task,” she said.

Gaertner worked closely with Cahill when Klobuchar served as Hennepin County Attorney, and Cahill was her chief deputy. Democrat Klobuchar now represents Minnesota in the U.S. Senate. Cahill joined the office in 1997 and worked as assistant Hennepin County attorney in the violent crimes division and later managed its Juvenile Prosecution Division.

But before he was a state prosecutor, Cahill was a criminal defense attorney at Colich & Cahill Law from 1987 to 1993. During that time, Cahill won several felony cases, including a murder trial against Lavertes Burch in 1990, his former law partner Michael Colich said.

Burch was acquitted of the 1972 stabbing death of a man outside of a Minneapolis deli. Complications with grand jury proceedings and disappearing witnesses kept the case from going to trial until 1990, so it was believed to be the oldest case tried in Hennepin County at that time, according to an archived Associated Press article in the St. Cloud Times.

The case against Chauvin is playing out during a global health crisis that threatens to delay or disrupt the proceedings. Chauvin’s trial was separated from those of the other three police officers charged in connection with Floyd’s death. It was assigned to the court’s largest room to allow for social distancing, but Cahill has denied requests to put the proceedings off until June.

On March 1, Cahill issued an order allowing one member of Floyd’s family and one member of Chauvin’s family to be present in the courtroom at a time during the trial. He also will allow only two members of the media and one CourtTV technician or producer to communicate with him and the camera operators televising the proceedings. Minnesota State Court Information Office said the chief judge assigned Cahill to the Chauvin case, and there is no public information about why Cahill was chosen.

Cahill is known as a judge who likes to move cases in an expeditious manner, said Andrew Gordon, deputy director for community legal services at the Legal Rights Center, a non-profit public defense corporation in Minneapolis.

In 2015, Cahill dismissed all charges brought against one of Gordon’s clients and 10 other organizers following a 2014 Black Lives Matter protest at the Mall of America, but allowed misdemeanor trespassing charges to proceed against 14 people who participated in the protest. Minnesota state court records show 10 were ultimately convicted.

“Those affiliated with the Black Lives Matter movement are, of course, free to express their views regarding policing conduct in this nation” and advocate for systemic change, but should be mindful that others can hold opposing views, and public authorities have a right to impose reasonable restrictions in the interest of public safety, he said in a 137-page ruling.

Cahill went on to commend the organizers of the protests as well as the Mall of America management, the Bloomington Police Department, and the Bloomington City Attorney’s Office for working in advance to ensure any demonstration, even if unauthorized, would remain peaceful.

“He is very deliberative,” said Mike Bryant, who has argued cases before him and is managing partner at Bradshaw & Bryant PLLC, a personal injury and criminal defense firm that represents clients across Minnesota.

“He’s tough in the sense that he’s a taskmaster,” he said. “He’ll keep people to task, he’ll make sure they follow deadlines, and he’s not afraid to rule.”

In 2019, Cahill sentenced Thomas Incantalupo to 24 years in prison for sexually assaulting 15- and 16-year-old girls he trained as an ice skating coach. Incantalupo pleaded guilty to the charges but appealed his sentence, arguing Cahill had abused his discretion and used impermissible factors to give him more time behind bars.

The appeals court upheld Cahill’s sentence Jan. 4, finding it was “neither disproportionate nor an exaggeration of the criminality of the offense.”

Selecting a jury for the trial may be the hardest part of the case before Cahill, attorneys say. Footage of Floyd’s struggle with police made national news. On camera, Chauvin can be seen kneeling on Floyd’s neck as he tells officers he can’t breathe. Police were apprehending Floyd outside of a convenience store for allegedly using a counterfeit $20 to make a purchase.

Chauvin’s attorney petitioned to have the trial moved to a different venue outside of Minneapolis and its neighboring counties, but Cahill denied the request.

“I think it’s going to be very, very difficult to pick the jury,” Gaertner said. “Having said that, I don’t know it would have been that all that much easier someplace else.”

Because the trial will be aired on national television, the case presents an opportunity for attorneys on both sides to play to the public and try to make a name for themselves while cross examining witnesses, particularly if Chauvin testifies.

“How Cahill responds to those types of issues will be important in determining how the public views the fairness of the trial,” Gordon said.

The camera might not capture all of the judge’s trial management, he added, but the Hennepin County district judge isn’t likely to let that type of grandstanding slide.

“I don’t think he’s going to have any issues telling counsel to tone it down, stop talking and/or just shut up,” Gordon said. “I think he will be hesitant to do a lot of that on camera.”