Judge again defended her record on sentencing criminals and explained her approach to deciding cases as she wrapped up a second day of sometimes contentious questioning from Republicans on the Senate Judiciary Committee.

Jackson, 51, parried questions from Republicans on a litany of legal and cultural issues as the committee considers her nomination to the Supreme Court. Democrats on the panel spent much of their time rebutting GOP attacks on Jackson and highlighting her credentials. 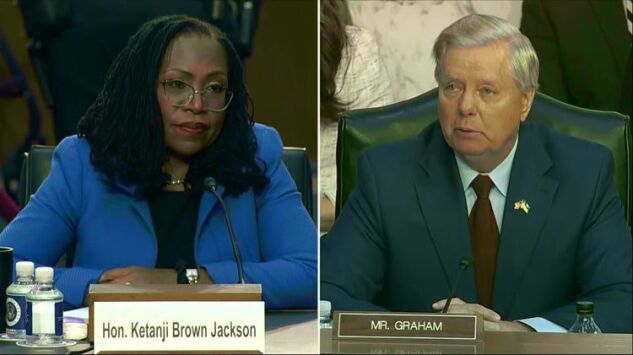 The confirmation hearing concludes Thursday with testimony from outside legal experts. Democrats’ narrow control of the Senate means Jackson’s confirmation as the first Black woman on the Supreme Court is all but assured, with a vote promised before a scheduled Senate break that begins April 9.

Senate Judiciary Chair said he expects his committee will vote April 4 on sending Jackson’s nomination to the full Senate.

None of the 11 Republicans on the evenly divided panel are likely to vote yes. That would leave the committee deadlocked, but Democrats will be able to advance Jackson’s nomination with a simple majority vote of the full Senate, with Vice President Kamala Harris providing a tie-breaking vote if necessary.

“It slows us down on the floor for a few hours,” Durbin said of a tie vote in the committee. “It doesn’t stop us.”

Republicans could try to boycott the committee vote, which could indefinitely delay action, but Durbin said he hopes that won’t happen.

If Democrats remain unified, they will be able to confirm Jackson to the Supreme Court even if no Republicans back her. Senate Democrats aim for a confirmation vote by April 9.

As Jackson’s testimony wound down, she described an encounter that inspired her when she was a freshman at Harvard, feeling homesick and questioning whether she belonged at the Ivy League school.

Asked by Democratic Senator of California what advice she would give young people in an increasingly diverse country, she described walking in Harvard Yard and passing a Black woman she didn’t know.

“She looked at me and I guess she knew how I was feeling. She leaned over and said, ‘Persevere,’” Jackson said. “I would tell them to persevere.” --Greg Stohr

Jackson used a tissue to wipe away tears during an impassioned and emotional speech by Senator of New Jersey, the only Black member of the committee. The Democrat said that “nobody is going to steal my joy” when it comes to the historic nature of Jackson’s nomination.

Pushing back against Republican contentions that her nomination was the result of dark money and far-left groups, Booker said she got where she is “how every Black woman in America who has gotten anywhere has” -- through hard work and determination.

“You have earned this spot. You are worthy,” Booker said. “You are a great American.” --Kelsey Butler

Jackson said she would recuse from a pending Supreme Court case over affirmative action at Harvard University, where she serves on the board of overseers. The court is considering abolishing the use of race in college admissions.

The case will be among the court’s first arguments when its next term starts in October. Given the court’s 6-3 conservative majority, Jackson’s disqualification probably wouldn’t change the outcome, but it would mean the court’s only Black woman wouldn’t weigh in.

“Do you plan to recuse yourself from this lawsuit,” Republican Senator Ted Cruz asked Jackson on Wednesday.

“That is my plan senator,” she responded.

Jackson didn’t discuss whether she will also recuse from a companion case involving the University of North Carolina. --Kimberly Strawbridge Robinson, Greg Stohr

In one of the sharpest exchanges in the hearings, GOP Senator accused Jackson of being far too lenient in sentencing those found guilty of distributing child pornography via the internet.

“I think the best way to deter people from getting on a computer and viewing thousands and hundreds and over time, maybe millions” of images of exploited children is “to put their ass in jail,” Graham said, “not supervise their computer usage.”

In an extended back-and-forth in which the South Carolina Republican repeatedly interrupted Jackson’s answers, Graham said she didn’t take advantage of an enhanced ability to boost prison terms in cases involving distribution of high volumes of child pornography.

Jackson said that in earlier work as a U.S. district judge she viewed deterrence as “one of the purposes of punishment” and that incarceration was one tool, but others are also available for convicts including “substantial periods of supervision” when using a computer. She said that sentencing guidelines were outdated by equating those in cases where images moved through the mail with those distributed online. -- Laura Litvan and Greg Stohr

Senate Republican leader kept up his criticisms of Jackson Tuesday on the Senate floor, a clear sign that her testimony isn’t likely to sway many GOP votes on confirming her to the court.

With the second day of the Judiciary hearing under way, McConnell called her responses to questions at the hearing so far “evasive and unclear” and said she should be more forthcoming about her judicial philosophy. He said that in cases “ranging from child exploitation to fentanyl trafficking she’s used every possible ounce of discretion to essentially remake sentencing policy from the bench.”

Democrats have the votes in the 50-50 Senate to confirm Jackson without Republican support, but President Joe Biden is seeking some GOP backing. So far, Senator Susan Collins of Maine is the only Republican who has signaled she could back the Circuit Court judge’s elevation to the high court. -- Laura Litvan

Sitting behind Jackson as she faces a barrage of questioning, is her husband, Patrick Jackson, who has been attracting attention by wearing an homage to American historical figures. On his socks.

Each day of the hearing he has been wearing colorful socks with the images of Thomas Jefferson, Benjamin Franklin and John F. Kennedy on subsequent days.

The nominee referenced her spouse during her opening statement on Monday, saying, “I have no doubt that without him by my side from the very beginning of this incredible professional journey, none of this would have been possible.”

Jackson has favored brightly colored jackets each day of the hearing, with her purple choice on Monday earning her a nod from Senator of Minnesota on social media. She also wears a scrunchie on her wrist -- the sign of a woman who has to hold back her hair on occasion. -- Kelsey Butler

Jackson’s public support is the highest of any Supreme Court nominee since Chief Justice in 2005, with 58% supporting confirmation, according to a new Gallup Poll.

The poll showed 30% opposing confirmation, with 12% having no opinion. Jackson’s support was higher than that for former President Donald Trump’s three Supreme Court nominees -- Amy Coney Barrett (51% in 2020), Brett Kavanaugh (41% in 2018) and Neil Gorsuch (45% in 2017). When Roberts was nominated, 59% supported confirmation.

Democrats overwhelmingly supported Jackson in the poll, with 88% backing confirmation, compared with 31% for Republicans and 55% for independents. The poll, conducted March 1-18, had a margin of error of 4 percentage points. --Greg Stohr

In her second day of testimony, Jackson is likely to face questions that will go over some of the same ground previously covered by senators on the Judiciary Committee as Republican delve further into her record as a judge and her judicial philosophy.

The committee will later meet behind closed doors to discuss the FBI’s background investigation of Jackson, who had been vetted for her current post on the Circuit Court a year ago. -- Greg Stohr and Laura Litvan