Last year, the Bryan Cave Leighton Paisner merger attracted attention not only because it was a major transatlantic BigLaw deal but also because it was the first one to be successfully negotiated by two women. The co-chairs, Lisa Mayhew and Therese Pritchard, review how they found success.

Almost one year ago, we announced plans to move forward as one firm, Bryan Cave Leighton Paisner (BCLP).

The merger attracted a great deal of attention for a variety of reasons. The resulting firm would be one of the largest, fully financially integrated in the world. This was a major transatlantic big law deal, and it just so happened that women were at the helm of both firms.

As far as we know, this is the first transatlantic law firm merger to be successfully negotiated by two women.

Finalizing a merger is certainly exciting but the proof, as they say, is in the pudding. On April 3, 2018, the real work of integrating two firms began in earnest. So much is at stake in the first year of operation, and we had several important tasks to complete. 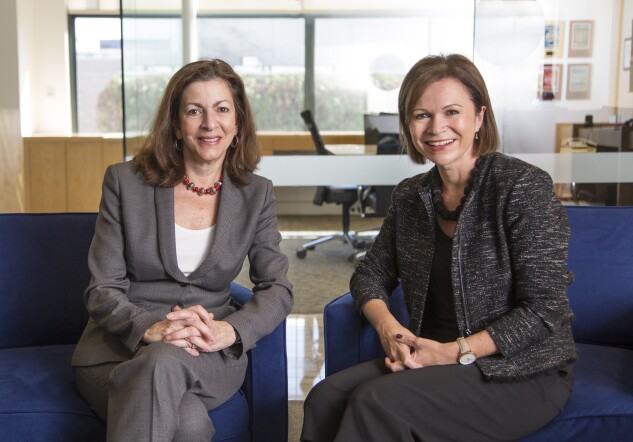 Task 1: Collaborating to Become One Firm

We were determined to be “One Firm” from the start—something that had not been done structurally for more than a decade. This meant letting go of a siloed approach and becoming fully integrated, both financially and from a practice perspective.

Combining as one financial entity took time, but the bulk of the practice focused integration entailed our partners having conversations about synergies and opportunities. Working in our favor were a number of cultural similarities, including a no-nonsense approach to partnering with our clients for the long term.

There is no substitute for face time, and we did invest considerable time in crisscrossing the globe talking and listening to people for several months.

Ultimately, we were able to create one firm and, despite the distractions of the transaction, maintain our growth trajectory. In 2018, our revenue was up 1 percent and profit per equity partner was up 5 percent. We have also added new partners in virtually every major market since the merger.

Dividing leadership responsibilities in a way that is practical and productive, and still conducive to the one firm ethos, was one of the more interesting challenges.

One of us is obviously geographically situated in the US, and the other in the UK. We had to figure out how to get to know and connect people, especially in that critical first year.

Our first big event as a merged firm—the annual partner retreat—occurred three weeks after the merger and brought together more than 500 partners from all over the world for the first time. I think it’s fair to say that we were crossing our fingers.

It was at this event where we both were able to see firsthand relationships being established and synergies being discovered. We started reaping the rewards of collaboration between the two legacy firms almost immediately. Even before the merger was official we had more than $1 million in referrals and post-merger we have had more than 600 cross-referral matters.

A big question for us was how to meld our two innovation groups without disruption, in order to harness the full power of this new dream team. We brought everyone together early on to hash out a plan for moving forward.

Shortly thereafter, we launched a new combined innovation team, followed by a new legal operations consultancy division. It was a great opportunity to remind the marketplace that we continue to be a trendsetter in this space working to innovate legal operations and find solutions for our clients.

Diversity and inclusion has been and continues to be a strategic priority for both firms. We embrace diversity, gender equality and mentoring as business imperatives, because clients simply will not tolerate anything less.

BCLP has a range of programs and initiatives in place aimed at ensuring greater diversity. BCLP is one of a small group of firms to achieve Mansfield Certified Plus status recognizing that, in addition to meeting or exceeding the pipeline consideration requirements for certification, we also successfully reached at least 30 percent women and minority lawyer representation in a notable number of our current leadership roles and committees.

We also were excited to announce that 13 of 23 newly elevated partners at BCLP are women (57 percent), and over one fifth are from an ethnic minority group.

In BCLP, we have created a new firm whose value and potential far exceeds anything the two legacy firms could have hoped to achieve independently. No one ever said mergers are easy, but we are proud of all we have accomplished in our first year.

We continue to look toward the future, energized by our successes and motivated to better serve our clients. When we merged, we were looking to do something fresh and different for our clients. We think we have done just that.

Lisa Mayhew is co-chair of Bryan Cave Leighton Paisner. She is a labor and employment lawyer by background, representing many corporates and financial institutions on their L&E issues. She successfully represented Merrill Lynch in the UK’s highest value gender discrimination and equal pay claim and has undertaken a number of secondments to clients’ businesses.

Therese Pritchard is co-chair of Bryan Cave Leighton Paisner. She was with the Division of Enforcement of the Securities and Exchange Commission and has concentrated on securities and financial institutions enforcement and litigation for more than 30 years.