A classroom sits empty at University of Baltimore in Baltimore on April 25, 2020.
Photographer: Alex Wroblewski/Bloomberg via Getty Images

Tight time frames aren’t unusual in court, but U.S. isn’t making it easy. ICE announced the restrictions on Monday and told colleges to submit an “operational change plan” by July 15 on how they will accommodate their international students under the new policy as they grapple with the highly infectious coronavirus. 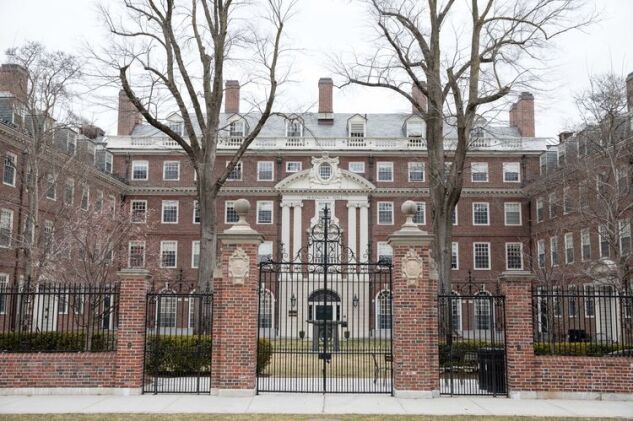 Meanwhile the academic calendar is studded with fast-approaching cutoffs for decisions including whether students want to defer their studies for a year.

U.S. District Judge in Boston has a lot to squeeze in, including the consideration of “friend of the court” briefs from outsiders. In a videoconference on Friday to plan it all out, Harvard lawyer estimated seven to nine such briefs, each consolidating a number of separate advocates.

Lee proposed that Burroughs consider both a temporary restraining order and a longer-lasting preliminary injunction against the new rules in a single hearing, saying the government had agreed it was best. He said that if the judge granted only a TRO, it would put students in a difficult position.

One of those people might be Eugene Ng, a rising junior at California State University, Fullerton. The Cal State system announced its online model in May. Ng said in an interview that if the school doesn’t change to a hybrid approach, he’s going to leave it, and the U.S.

“If I pay full prices, full tuition, and I still have to go back to my country to have time zone differences” taking online classes, “I won’t want to do it,” said Ng, 26, who’s from Malaysia. “On top of that, I don’t think I ever want to come back to the United States again, to be honest, because I spend so much money here -- we spend so much money here. I don’t think this is, you know, how we’re supposed to be treated.”

On the conference Friday, Lee said ICE’s Wednesday deadline was a problem in other ways as well.

“There are a whole series of dates where students have to decide whether to defer their academic year for an entire year,” he said. “Decisions have to be made on what courses are going to be offered. And folks have to decide, quite honestly, what country they’re going to pursue the next year from. A lot of that happens from the 15th into the next week.”

Burroughs, who ruled for Harvard last year in a alleging it discriminates against Asian-Americans in admissions, set a hearing on the combined freezes for Tuesday.

“I’m just envisioning that between the briefing and the amicus briefs, there could be thousands of pages of reading in order to do this properly,” she said. “I’m just worried about whether it is humanly possible.”

Harvard and the sued ICE over the rules two days after they were announced. The two argue the Trump administration’s decision to rescind a coronavirus exemption to ICE’s in-person class requirements was “arbitrary and capricious” and violates the Administrative Procedure Act by failing to allow public comment and consider harm to students. Late Friday they filed a request for a preliminary injunction.

ICE’s new directive also requires that students on existing visas who want to remain in the U.S. transfer to a school that offers classes in person.

Colleges have begun rolling out pandemic plans for the fall semester, with many offering some form of limited in-person classes to prevent the spread of the virus. Harvard said about 40% of students would return to its campus in Cambridge, Massachusetts, while all courses will be taught remotely. For the California State University system, too, that could mean a significant restructuring of reopening plans.

On Thursday, California joined the fray, announcing a lawsuit of its own.

“As the state with the largest university system in the nation, California is committed to doing everything it can to protect hardworking people who have earned the right to study and contribute to our communities,” the state attorney general’s office said in a statement.

(Updates with plaintiffs’ request for a preliminary injunction. An earlier version of this story corrected the timing of California State University’s online-classes announcement.)

To contact the reporters on this story:
in Kansas City at croth55@bloomberg.net;
in Boston at jlawrence62@bloomberg.net