Justice Neil Gorsuch found himself in the unaccustomed position Monday of taking flak from the right after authoring a landmark opinion extending job discrimination protections to LGBT workers.

Gorsuch’s use of “textualism"—the interpretive approach embraced by many conservatives—to justify his 6-3 ruling garnered the strongest rebuke.

“Justice Scalia would be disappointed that his successor has bungled textualism so badly today, for the sake of appealing to college campuses and editorial boards,” said Judicial Crisis Network President Carrie Severino. Her conservative organization spent millions to support Gorsuch and his fellow Trump-nominee Justice Brett Kavanaugh.

Severino was referring to the late Antonin Scalia, who was widely viewed as the father of the textualist movement. 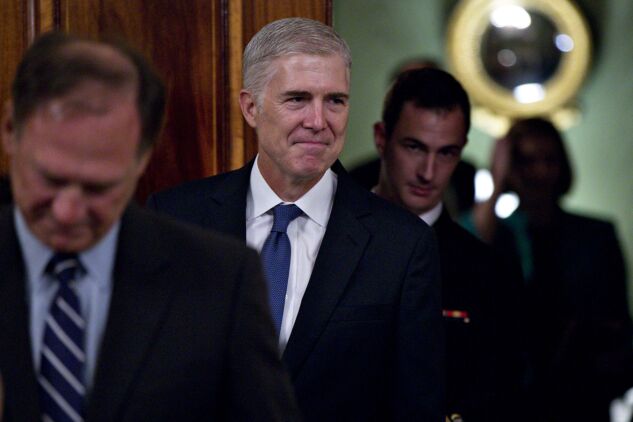 Since joining the court in 2017, Gorsuch has occasionally broken with his conservative colleagues and backed progressive outcomes. But liberals celebrating the employment discrimination ruling shouldn’t get too used to it.

Gorsuch is expected to join Kavanaugh in the other big ticket decisions still to be decided this term, including immigration protections for “Dreamers” and efforts to obtain the president’s financial records.

Justice Scalia would be disappointed that his successor has bungled textualism so badly today, for the sake of appealing to college campuses and editorial boards.

This was not judging, this was legislating—a brute force attack on our constitutional system. (1/x)

Justice Samuel Alito’s stinging dissent likened the majority opinion to a pirate ship. “It sails under a textualist flag, but what it actually represents is a theory of statutory interpretation that Justice Scalia excoriated—the theory that courts should ‘update’ old statutes so that they better reflect the current values of society.”

Constitutional law professor Josh Blackman said the most surprising part about the decision wasn’t that Gorsuch came out the way he did, but how he did it.

The meaning of ‘sex’

The question for the justices was whether the term “sex” in federal anti-discrimination laws protected LGBT workers. In finding that the law does prohibit discrimination against those workers, Gorsuch wrote that the answer was “clear” and “unambiguous.”

That implies every judge who considered the issue before 2017, when a federal appellate court ruled for the first time that LGBT workers were protected, missed an “easy” answer, Blackman said. That confidence likely “occasioned the sharp tone in Justice Alito’s dissent.”

Alito said the “arrogance” of Gorsuch’s argument “is breathtaking.”

The criticism is all the more striking considering how often Gorsuch and Alito usually agree. They have ended up on the same side in 90% of cases this term through April 2020, according to SCOTUSblog. Historically, they’ve agreed way more often then not.

Conservatives who support textualism—interpreting statutes based on the text of the law rather than the intent behind it—often say that it’s a neutral tool that’s separate and apart from the conservative outcomes it typically produces, constitutional law professor Leah Litman said during a news conference following the opinion’s release.

This is an “uncomfortable example” of textualism in practice for those who are now framing Gorsuch’s vote as a betrayal, said Litman, who teaches constitutional law at the University of Michigan.

The fact that Roberts didn’t write it prompted speculation that Gorsuch wasn’t initially slated to draft the majority opinion.

The justices typically try to spread the work around by ensuring that each writes at least one case from each of the court’s monthly argument sittings. More senior justices, like Roberts, typically write the opinion in closely watched cases.

But Gorsuch wrote two opinions for the October sitting, in which the LGBT case was argued, while Roberts, Kavanaugh, and Justice Ruth Bader Ginsburg didn’t write any.

That fluidity behind these scenes may have contributed to Alito’s consternation, Litman said.

Some conservatives might be upset about this particular ruling, but Gorsuch’s “muscular commitment to textualism” in the opinion will likely lead him to more conservative results than progressive ones in the future, she said.

“Justice Scalia surprised conservatives in plenty of cases,” she said.

“But at the end of the day these are justices, including Gorsuch, who are going to get it right most of the time.”