Just before the coronavirus pandemic hit, Marlar left the partnership at Kutak Rock in Atlanta for the Appalachian Trail, a nearly 2,200-mile trek from Georgia to Maine.

“The world turned sideways, but I kept walking,” said Marlar, who planned the journey prior to Covid-19. “It was such a great experience in a terrible year. And when I got off the trail, I decided I wanted to do something different career-wise.”

Marlar, who began talking to the EFF over the summer, has relocated with his husband to New York.

Taking a career break is still anathema to many Big Law attorneys who’ve long been taught that even a small gap in their resumes could hurt their career ambitions. But 2020 has caused many normally office-bound workers to re-evaluate their priorities.

Will Meyerhofer, a former large firm lawyer-turned-therapist, said time away from work can be beneficial, particularly for a lawyer considering a major change.

For those escaping for a few weeks to overcome burnout who then don’t feel the itch to return, Meyerhofer said that’s often a sign the office isn’t where they want to be.

“You probably already sense at some level that this is a first admission to yourself that you are on a quest for meaning, and authenticity, and that it might lead to places you’ve never been,” Meyerhofer said. “Sure, put on your seat belt and take the ride. One way or another, change is coming—you might as well embrace it.” 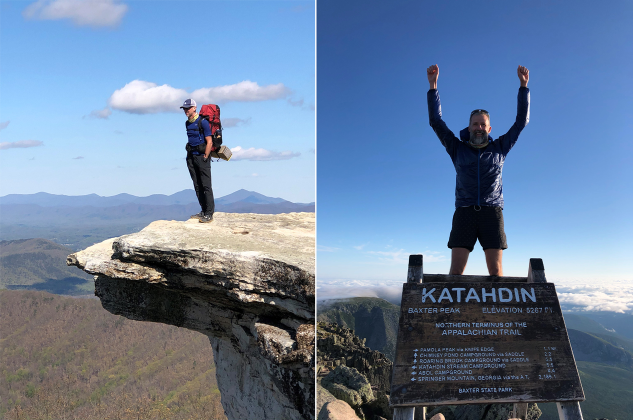 Marlar was focused on doing 25-to-30 miles a day and thru-hiking the trail, a nonstop journey that even for experienced hikers can take between five to seven months. Marlar, 50, who blogged about his experiences, did it in four.

He fell in with a group of mostly younger hikers that established rules to keep each other safe. When they passed through a small town, the group all wore masks and limited visits to places necessary for provisions, like grocery stores. They avoided gathering spaces like shelters and privies.

“I still don’t know if it was the right decision to keep going on, but we did,” he said.

Hiking in a group proved beneficial when Marlar came across a “momma bear and three baby cubs” in Shenandoah National Park. “It was awesome, but a little scary because we were 25, maybe 30 yards from her,” he recalled.

Thankfully, the bears and people went their separate ways.

While many might consider hiking the trail a solitary experience, Marlar said his best times were often with other people.

In Front Royal, Va., Marlar walked through a McDonald’s drive-thru—many stores and restaurants along the trail were wary about letting hikers inside due to the pandemic—and was told he couldn’t order.

Marlar trudged off and prepared to start a long hiking day without food, only to have a woman who had waited behind him and witnessed the scene drive up and drop off his breakfast.

“She worked at Big Lots and her name was Teresa,” Marlar said.

Inspired by her kindness, before he hit the trail again Marlar wrote an email to the company’s CEO singing Teresa’s praises. Within three hours, the CEO responded to say the retail chain was planning a party to honor her for being an exemplary employee.

In Asheville, N.C., Marlar met up once again with his husband, who due to the surging pandemic was increasingly uncomfortable traveling.

When the couple reunited again it would be July 6, when Marlar finished the northern terminus of the trail at Mount Katahdin in Maine.

“It was hard, we had planned to see each other at different spots, and I was homesick,” Marlar said. “But I think that’s also why I was able to get it done in four months.”

Sleeping in the woods and drinking from streams weren’t so much a hardship for Marlar as being away from the family and friends he had left behind.

In a way, Marlar said his feelings were similar to what others have felt this year, a longing for a time when being distant wasn’t a requirement.

Marlar said Kutak Rock and former colleagues at the firm were supportive of his decision to take a sabbatical. They also knew he wanted to do something different.

The description for the general counsel job at the EFF popped up in an in-house alert email that Marlar read while driving home from Maine. He applied and got the gig.

As the EFF’s first in-house legal chief, Marlar said he now gets to “exercise different parts of my brain,” doing everything from trademark to litigation to employment work. He took over from Renita Thukral, who had been serving as an external legal adviser to the EFF and continues to advise the organization.

Meyerhofer said that extended absences can be a quest for lawyers to find a more authentic expression of themselves.

“You can never really know how it’s going to turn out or where you’re going to end up when that year is finished,” he said. “And that might be the whole point of it.”

Marlar noted his second sabbatical only took a few months, so a break from Big Law doesn’t have to be an extended absence from legal practice. Secondments, like one that Marlar had with Habitat for Humanity in 2008, can also help lawyers expand their opportunities and experience, he said.

“You’ll come back with more energy and enthusiasm for what you’re doing,” Marlar said. “And you’ll be a happier and healthier lawyer.”