For the first time in history, people outside the U.S. Supreme Court’s walls will be able to hear arguments as they happen. It may not be baseball, but plenty of court watchers and casual fans alike are excited for the action.

The institution rejects cameras in the courtroom or even same-day audio, but the coronavirus threw it a curveball and now the justices are livestreaming 10 arguments over the next two weeks, with that audio carried to the public by C-Span and other networks.

Detailed below are those controversies to be considered by the nine justices over six dates, beginning May 4 and wrapping up on May 13. They’ll be phoned in by counsel as the court abides social distancing requirements necessitated by the pandemic.

The lineup starts with some table-setters, less weighty cases, presumably to work out any kinks, then finishes with some heavy hitters, cases involving subpoenas for President Donald Trump’s financial records and a dispute over faithless Electoral College electors.

Game time is 10 a.m. Each side gets 30 minutes to make its pitch. Petitioners bat first. They’re likely to reserve some rebuttal time. Respondents are up next, followed by those last licks. On doubleheader days, the second argument will start right after the first. 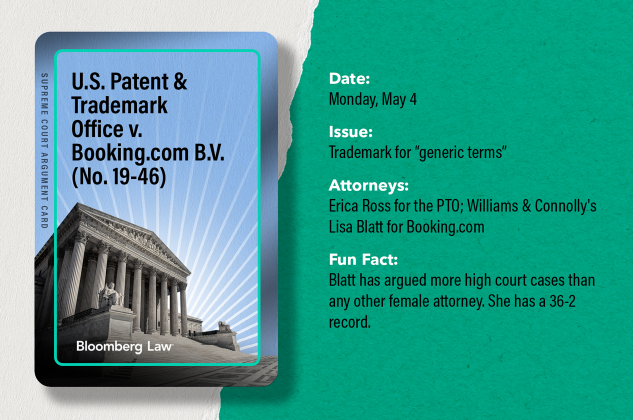 What We’re Listening For: Opening Day glitches and bloopers. How will the justices handle questions? Were there any difficulties? What will they need to fix? There’s a veteran arguing for Booking.com—Williams & Connolly’s Lisa Blatt, but even she’s never done it by phone. Uncommonly, her opponent too is a woman, Erica Ross, from the Office of the U.S. Solicitor General. 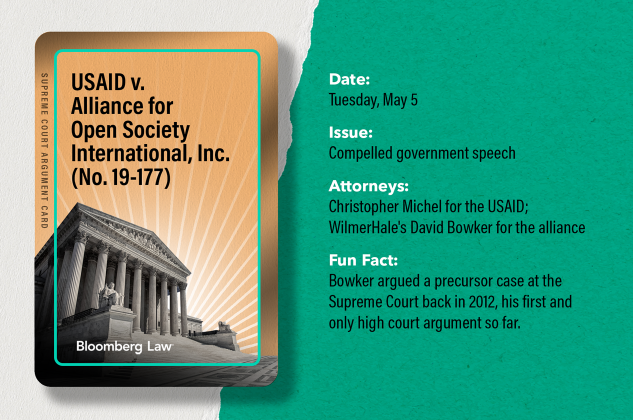 Significance: This is a battle over whether the free speech guarantees of the U.S. Constitution can be extended to foreign-based affiliates of American organizations, and whether the government can compel speech in exchange for their receipt of grant money to combat HIV/AIDS. The U.S. has committed $79.7 billion to that fight since 2003, requiring recipients to expressly oppose sex trafficking and prostitution. Opponents say having such an explicit policy can actually hinder their ability to reach those most in need. In 2013, the high court said the federal government couldn’t require U.S.-based groups to comply with the policy.

What We’re Listening For: The Roberts Court has been extremely protective of free speech, using the First Amendment to strike down federal limits on “scandalous” trademarks, mandatory union fees, and campaign finance limits. But it’s been reluctant to extend constitutional law beyond the U.S. border. How will the court balance these competing concerns? 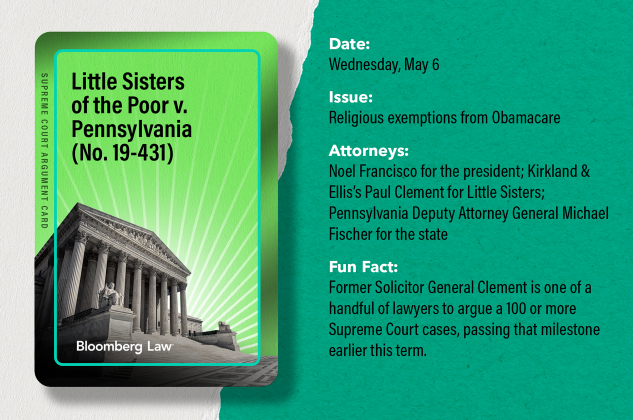 Significance: The Trump administration wants to expand religious group exemptions from the Affordable Care Act’s requirement that employers provide contraceptive coverage. Religious groups say providing that coverage, or participating in almost any way in facilitating it, violates their religious beliefs and the First Amendment.

Pennsylvania and New Jersey say Obamacare doesn’t permit their exemption and even if it did, the administration didn’t comply with rules for enacting the new regs. They also say expanding the exemptions will force more residents into state-funded health care systems. According to the court below, “between 70,500 and 126,400 women nationwide will lose contraceptive coverage as a result” of the measure. The case is consolidated with Trump v. Pennsylvania (19-454).

What We’re Listening For: In ruling against the U.S., the lower court issued a “nationwide injunction,” preventing the administration from applying the exemptions across the country, not just in Pennsylvania and New Jersey. Nationwide orders have rained out executive policies in other administrations, but the Trump administration says politically motivated judges are using them more now than ever. 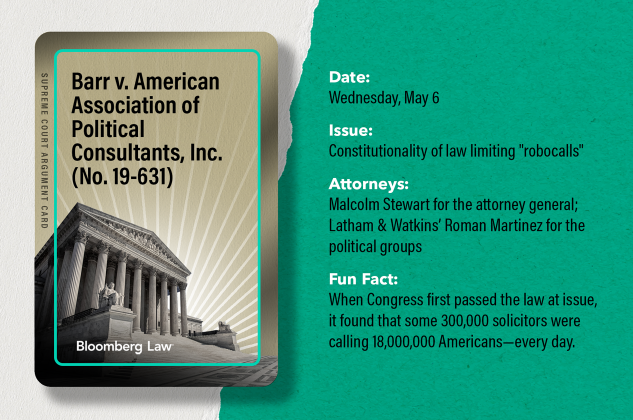 Significance: Congress passed the Telephone Consumer Protection Act in the 1990s to deal with unwanted automated phone calls. But Congress created an exception for “robocalls” seeking to collect government debt. Political groups that want to make their own calls say the government shouldn’t pick and choose which speech it likes and which it bans. Such a “content-based” restriction is unconstitutional, they argue. They say the exemption can’t be separated from the rest of the TCPA, so the whole statute must be struck. The government counters the exception isn’t based on the content of the call, but rather the parties’ previous borrowing relationship.

What We’re Listening For: In 2015, the high court struck down an Arizona town’s sign ordinance in Reed v. Town of Gilbert. Reed was a game changer that broadly defined content-based speech and made governments pass the most exacting level of judicial scrutiny to survive review. There’s no disagreement among lower federal courts on the issue. We’ll be watching for signs the justices are thinking of benching Reed, or limiting its reach. 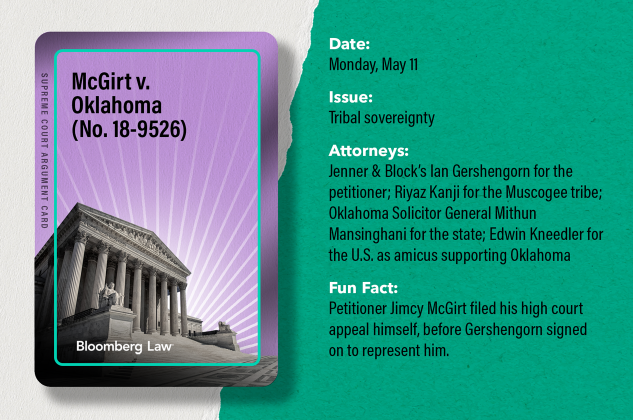 Significance: This is a battle over American Indian sovereignty in Oklahoma, and who has authority over the eastern part of the state. The answer will turn on technical questions, like did Congress “disestablish” the Muscogee (Creek) Nation’s reservation, or was it even a reservation in the first place. The implications have significant practical impact. The Creek are one of the “five tribes” marched west on the Trail of Tears to what’s now Eastern Oklahoma. If their 19th century reservation—as well as the other tribes’ territories that take up the eastern half of the state—are still intact today, Oklahoma officials worry that they won’t have jurisdiction to prosecute Indians in half of the state, a region known before statehood as Indian Territory.

What We’re Listening For: All ears will be on Gorsuch. When the court heard a similar case about Eastern Oklahoma’s status in 2018, Gorsuch was benched because he was still on the Tenth Circuit when the case was there. The remaining eight justices couldn’t decide the matter, presumably because they were evenly split. Gorsuch isn’t recused from this one, so he’ll likely be the deciding vote. In his three years on the high court, he’s ruled for tribes several times.

Our Lady of Guadalupe v. Morrissey-Berru 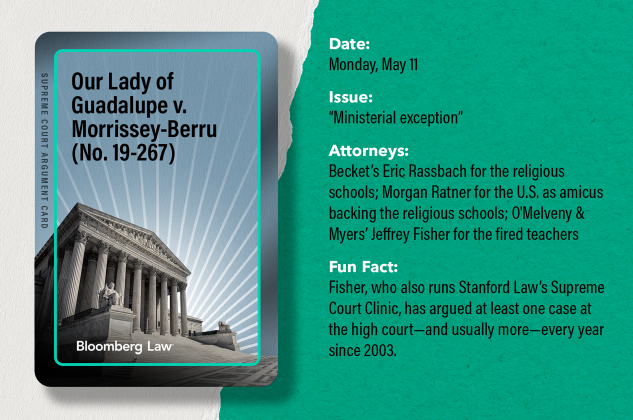 Significance: The court first recognized a “ministerial exception,” limiting when courts can resolve employment disputes involving religious employers, in 2012. It’s meant to protect religious employers from federal government interference with their “ministers.” In that 2012 case, the high court said federal anti-discrimination laws didn’t apply to a religious school teacher who led students in prayer and taught classes part of the time. The lower court in this new case interpreted the exception narrowly, finding that Catholic school teachers weren’t “ministers” and could sue the school under federal law.

What We’re Listening For: Breyer and Kagan. The court’s five Republican-appointees have been protective of religious groups and legal doctrines meant to shield them. Often, they’re able to pull Breyer and Kagan to their side. Court watchers suspect their presence in the majority could narrow how the court actually comes down. 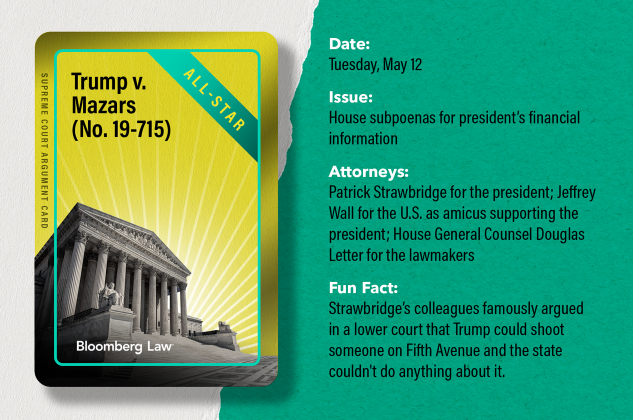 Significance: Can House committees subpoena third parties for the president’s financial records? Most immediately, the case will likely decide whether the president’s tax returns, which he refused to make public before the 2016 election, will be revealed before the one in November. Perhaps more significantly, it will determine the balance of power between the legislative and executive branches. The House asserts it has broad authority to investigate matters related to lawmaking. Trump contends Congress shouldn’t be able to harass the president, and that doing so would distract him from the duties of his office.

What We’re Listening For: Roberts and Kavanaugh. With the new conservative majority, they’re now the court’s center and this case is likely to come down to them. Will they look behind Congress’s stated reasons for issuing the subpoenas to determine if the Democratic-led House really is harassing the president, or will they defer to the lawmakers as past Supreme Courts have? 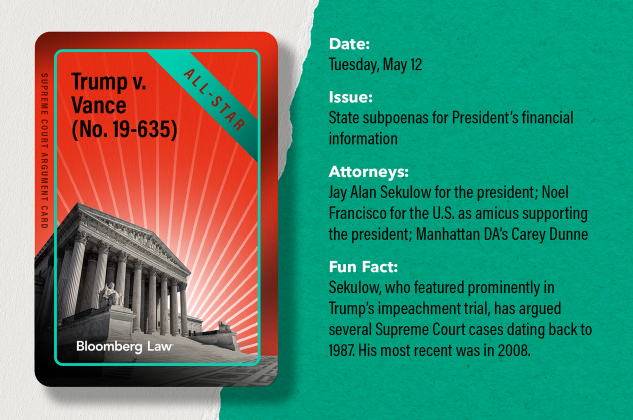 Significance: This case, too, involves a subpoena for Trump financial records. But here, the party seeking that information is New York County District Attorney Cyrus Vance Jr., who is investigating potential criminal activity by not just the president, but his family members. The implications are similar to those in Mazars. But instead of a question of separation of powers between federal branches, it’s federalism, the relationship between the national government and the sovereign states.

What We’re Listening For: Again, it likely comes down to Roberts and Kavanaugh. 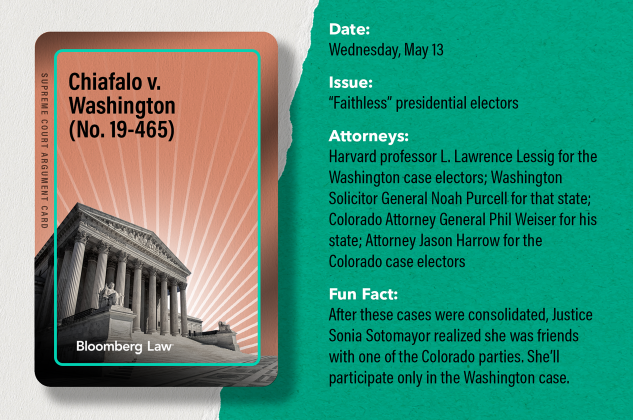 Double-Header: In a case out of Washington state, the justices will consider whether states can punish members of the Electoral College—here, a $1,000 fine—who don’t vote for the candidate they pledged to vote for. Later in the day, the court will hear the same issue in a Colorado case, where the elector was removed and his vote wasn’t cast. The matters were originally consolidated but now they’re split due to a late-found conflict for Sotomayor, who’ll sit out the Colorado arguments.

Significance: It’s likely the court put these cases on the May calendar to resolve the dispute before the November election. Electors customarily vote for the winner of the state’s popular vote. But so-called “faithless electors” vote for someone else. A Colorado elector voted for then-Ohio Gov. John Kasich, a Republican, rather than the winner of the state, Democrat Hillary Clinton. Rogue electors have never altered the outcome of a presidential election. Ten electors either tried to or did vote for someone else in 2016, the most in any presidential election ever. 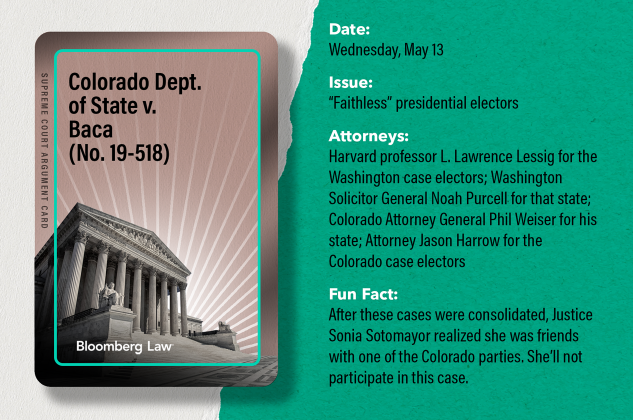 What We’re Listening For: As the arguments come to a close, we’ll assess how the court’s phone arguments went to see if it’s something they might consider in the future. The justices are historically averse to change and have resisted opening up the courtroom. But a good experience here could make it a new ballgame.