Dershowitz on Wednesday said he never saw the wealthy and well-connected Epstein with underage girls. He also denied claims in a recent defamation lawsuit against him that he joined Epstein in abusing minors. 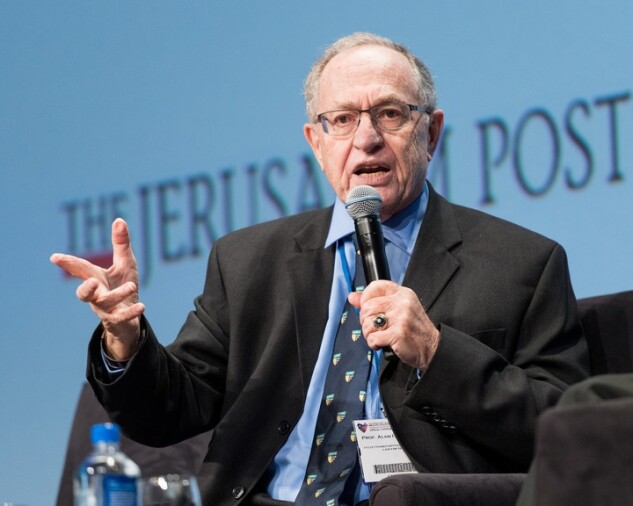 “I never saw anything and nobody I know ever saw anything,” Dershowitz said in a Wednesday telephone interview. “If I ever saw him with anyone even close to underage, I would have been out of there and turned him in.”

Dershowitz was part of a team of lawyers that helped negotiate a lenient plea deal and nonprosecution agreement for Epstein in 2007 following previous sex-abuse claims against the financier. The deal, which led to 13 months in jail for Epstein, including work release six days a week, has come under harsh criticism since his arrest Saturday on new charges of sex trafficking. It also renewed pressure on U.S. Labor Secretary Alex Acosta, who agreed to the plea deal more than a decade ago when he was a U.S. Attorney in Florida.

Dershowitz defended the arrangement and said he would have “violated my oath” as a lawyer if he hadn’t gotten the best deal for his client. He said the federal charges threatened by Acosta’s office were weak because the government would have to prove Epstein crossed state lines with the girls. The state charges were stronger, he said.

“I’m very happy” with the plea agreement, he said. “I think we did a good job and we got the best deal we possibly could. If people don’t like it, they should blame the prosecutors or the judge.”

At a press conference Wednesday defending the deal, Acosta noted that the agreement led to jail time, required Epstein to register as a sex offender and forced him to pay restitution to victims and pay for their lawyer.

Acosta said the agreement was reached because a state grand jury in Florida had “returned a prostitution charge against him” that “would have resulted in no jail time.”

“This was a state case,” Acosta said.

But later Wednesday, Barry Krischer, who was the state attorney for Palm Beach County during the Epstein investigation, said in a statement: “I can emphatically state that Mr. Acosta’s recollection of this matter is completely wrong. Federal prosecutors do not take a back seat to state prosecutors. That’s not how the system works in the real world.”

“If Mr. Acosta was truly concerned with the state’s case and felt he had to rescue the matter, he would have moved forward with the 53-page indictment that his own office drafted,” Krischer added.

The Epstein saga has also created legal troubles for Dershowitz.

The attorney was sued for defamation in April by Virginia Giuffre, a Florida woman who claims Epstein sexually abused her from 2000 to 2002, when she was under 18. In her suit, Giuffre claims Epstein forced her to have sex with Dershowitz at the financier’s Manhattan mansion, and that the lawyer defamed her in recent months by calling her a liar on Twitter.

Dershowitz denies her claims and wants the suit thrown out. In the interview, he said “anyone who’s falsely accused should have a right to respond,” and said that his tweets about Giuffre are protected by the First Amendment.

“I’m trying to defend two issues here -- one is my right to reply to what she is saying and the other is my innocence,” he said. “I can prove that in trial or in a countersuit.”

In her lawsuit, Giuffre says she was sexually abused by Epstein and Dershowitz starting when she was 16. Dershowitz, she says, defamed her by claiming she was lying, that she “made up” the story to “get money” from wealthy people, and that he was “framed.”

“Surely, Prof. Dershowitz has at least as much right to call his accuser a liar as the accuser had to call him a pedophile and rapist,” his lawyer, Howard Cooper, said in the filing.

On Tuesday, Giuffre filed a response to Dershowitz, saying the lawyer’s statements are not protected by the “self-defense privilege.” She noted that he was trying to derail a case after initially challenging her -- in a March tweet -- to sue him.

“Dershowitz is trying desperately to get out of the case,” she said in the filing. The lawyer can’t support his claim that Giuffre and another alleged victim made up a story “as part of a supposed extortion plot,” she added.

Dershowitz said that his family spent time at Epstein’s Florida home, and that he wouldn’t have done so if he believed anything was amiss. In her lawsuit, Giuffre refers to Epstein and Dershowitz as “close friends,” while the lawyer has publicly referred to the money manager recently as an acquaintance.

“To show you how little I knew, he loaned me and my family his house in Palm Beach where a lot of this is supposed to have occurred, and we spent five days there,” he said in the phone call. “I never would have dreamed of allowing my grandchildren to stay where that was going on. It all totally came out of the blue.”

In 2015, Giuffre filed an earlier defamation suit against British socialite Ghisalaine Maxwell, a longtime associate of Esptein’s, for calling her a liar. A federal appeals court in New York last week ordered the unsealing of as many as 2,000 pages of documents in that suit, in which Giuffre claims Maxwell, the daughter of the late British publisher Robert Maxwell, also abused her.

Epstein is being held in a federal lockup in New York after his Saturday arrest on federal sex-trafficking charges involving dozens of underage girls whom he allegedly paid for sex acts for years at his mansions in Manhattan and Palm Beach, Florida. The case is refocusing attention on years-old claims against Epstein.

--With assistance from Bob Van Voris.

To contact the reporter on this story: Erik Larson in New York at elarson4@bloomberg.net

To contact the editors responsible for this story: David Glovin at dglovin@bloomberg.net Steve Stroth