When Arlo Hanlin Hemphill’s lease was up this fall he took his work on the road, attending virtual meetings as he traveled everywhere from the Ozark Mountains to the Chihuahuan Desert.

His working and camping journey continues today across the states, but the senior ocean campaigner for Greenpeace is paying taxes only in one of them: Maryland.

“I just walked away,” said Hemphill, who lived and worked alone from a Baltimore row house during the coronavirus pandemic’s first eight months.

The pandemic has spurred millions of Americans to do the same and temporarily relocate in search of cheaper digs, smaller crowds, or even a bit of adventure. But freedom has its price: employees in most cases have been left on their own to determine what they owe states this tax season, with a bevy of conflicting state rules and lack of guidance from many employers.

And states are clashing over billions of dollars in income taxes withheld from residents who now work away from home.

“The states are so burdened losing funding during the pandemic, they are looking to gain tax dollars anyway they can,” said Tom Corrie, Principal and Co-Leader of the State and Local Tax Practice at Friedman LLP.

The U.S. Supreme Court is expected to announce soon whether it will step into the issue, with New Hampshire asking the court to stop Massachusetts from taxing its residents who now do their jobs from home.

The justices have asked the Biden administration to weigh in. If granted, the case could determine the fate of similar, permanent tax laws in New York and five other states.

Employers nationwide, from multistate firms to nonprofit organizations to boutique consultancies, have been left in a precarious spot when advising workers who have spent the better part of a year away from the office.

“The most common type of guidance out there is status quo guidance, where you are just pretending the pandemic never happened,” said Patrick Skeehan, manager of the SALT-Washington National Tax Office for Grant Thornton.

Businesses that are proactive have to reconcile numerous tax withholding questions, even for those who worked out of their own home residences but stopped crossing state lines to go to the office. Those include determining if there’s a valid business connection, whether they may need to provide employees additional tax forms, and if they should be withholding on their employee’s behalf. 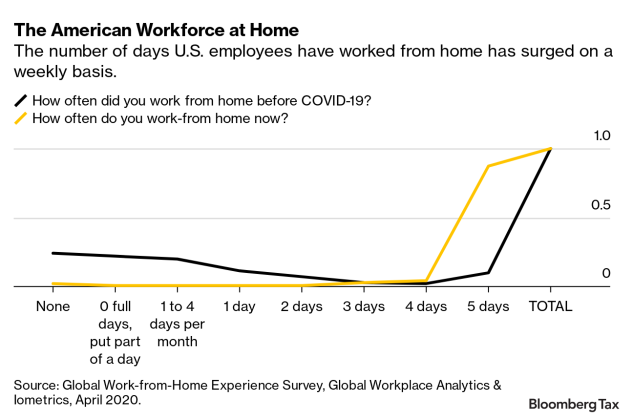 “Many employers have opted probably not to do anything to just sit and wait it out,” said Raymond Freda, a managing director at Andersen, who’s been advising clients in New York and surrounding states on conflicting tax laws.

“If I’m a New York employer and my employees used to come to New York, and now they’re spread out around the country, but it’s just for a couple of months, am I going to now register? Start withholding in these other states? Get on the audit radar and deal with all the deconstruction of that whenever everybody comes back?” said Freda. “The answer from a business perspective is, ‘Probably not. I’ll live with the risk.’”

It’s left companies delicately threading the needle, often on a case-by-case basis, to determine how to handle employees they suspect to have temporarily moved away from their primary residence during the pandemic.

“From an employer perspective, it’s hard to know what to do right now,” said Michael Chittenden, special counsel for Covington & Burling LLP. “I have some clients who have employees, who are scattered, and they know they’re scattered.”

His advice to clients with employees living elsewhere: Analyze the affected states pair by pair.

“I wanted one time in my life a year to live in the world,” said Melanie Young, a self-employed radio show host and author. She and her husband David expedited their plans to live in another part of the country away from idyllic Hudson Valley when Covid-19 hit. “We wanted to see places and rethink where we wanted to live.”

But they made sure to do one thing before hitting the road last year: keep a permanent address in New York.

“You’ve got to do your homework,” said Young, who read the book, “Living the RV Life,” at a friend’s suggestion, on the importance of being domiciled. “I still have a New York address; it’s a post office, but I have a home we could go back to.”

Tara Teaford, a 42-year old technical manager at a consulting firm, had no problem telling her employer that she would be working away from a home after purchasing a 25-foot RV in September.

“I didn’t have to, but I did,” said Teaford, who works at consulting firm with about 65 employees based in Tyson’s corner, Va.

Teaford said co-workers got used to the paneling in her “escape pod” RV during video calls, and often quizzed her: “Where in the world are you today?” as she traveled down Route 17 along the Carolina coastline for less than a month, returning home intermittently.

So far, she said, there’s been no formal company announcement on future work-from-home plans, but she expects guidance soon.

“People are starting to ask questions, ‘Hey, you think it’s OK if I get out of my lease completely?’” said Teaford. “Because, again, what we thought was temporary has turned out to be much longer term.”

Businesses have had to figure out whether they should, and even can, keep track of their employees to ensure they are tax compliant and withholding properly.

“That’s the question that haunts everybody,” said Karen Ward, director of payroll training at the American Payroll Association. “How does the state know that you need to be filing? Did the employer report anything to that state? That’s how they’re going to know initially.”

Most employers don’t have the proper systems and technology in place to track employee locations on a day-to-day basis accurately for tax reporting, said Skeehan.

Even companies that are requiring information on employee location have to be careful, said Ward.

“You don’t want to go after an employee to find out, and then they think, ‘Well you don’t trust me,’” she said.

Hemphill is waiting to hear when Greenpeace may reopen its Washington, D.C., headquarters and has considered alternatives like a virtual mailbox—a resource many sailboat owners use as their legal address—as he figures out his next step.

To contact the reporter on this story: at dborak@bloombergindustry.com