The Federal Reserve’s emergency rescue of the U.S. mortgage market should have set off celebration among lenders trying to keep up with demand from borrowers. Instead, executives at got a hefty margin call.

That was just a fraction of the pain the Fed unintentionally inflicted on lenders in mid-March when it announced plans to buy a massive amount of mortgage securities. The move, meant to steady the market, caught many lenders by surprise and tipped their routine hedges deep into the red.

It’s added to strains throughout the industry that have left the gap between mortgage rates and benchmark Treasuries the widest since 2009. Back then, bank failures and concerns about the housing market kept home loans from becoming cheaper for borrowers. Now, it’s obscure parts of the financial world that are holding back efforts to shave thousands of dollars from many Americans’ biggest expenses -- their mortgages.

“The Fed came in trying to help, but they overshot,” said , chief operating officer of Mortgage Capital Trading Inc., which says it handles hedging for about 20% of the mortgage market. He estimates margin calls initially drained as much as $5 billion from lenders before the Fed eased off, posing “an existential threat” to some nonbanks that operate on thin cash cushions, selling off loans as soon as they’re made. 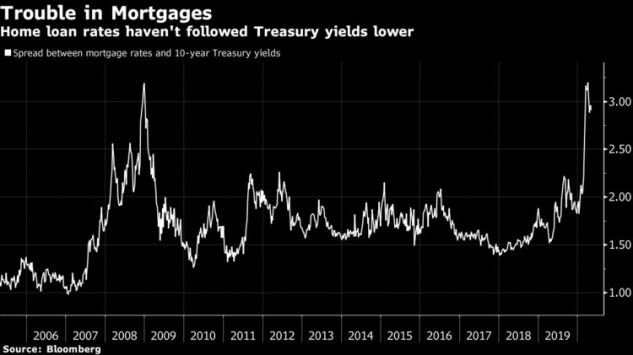 Mortgage lenders promise to lock in interest rates for borrowers weeks before loans are finalized, then hedge that risk by shorting mortgage-related securities. But the Fed’s buying drove up prices for those assets, turning the safeguards into sudden demands for cash. Quicken, among the largest U.S. mortgage lenders, met its obligations during the period, spokesperson John Perich said.

“Every responsible lender hedges their interest-rate risk,” with money shifting daily to keep the contracts in parity, Perich said. “The significant price fluctuations in March meant that large margin balances flowed back and forth between lenders and broker-dealers. Quicken Loans was able to easily meet these obligations thanks to our fortress balance sheet -- thus enabling us to continue originating record volumes.” He declined to comment on the size of the margin call Quicken received.

In a sign of the concern among investors, Quicken’s two 10-year bonds traded below 91 cents on the dollar in late March, from above par at the end of February. Those prices have mostly recovered, with both trading around 98 cents on Friday. For a time, market turbulence prompted lenders including Quicken to stop offering rate locks near the start of the mortgage process. Perich said that standard practice is resuming at Quicken.

As the coronavirus pandemic sent global markets into a tailspin, the Fed slashed interest rates almost to zero and embarked on a series of programs to pump cash into markets, opening up lending facilities and buying assets ranging from Treasuries to risky corporate debt. Mortgage bonds were among the first it targeted.

The opportunity to refinance into a cheaper rate is now grabbing headlines. But the trend captivating Wall Street is the canyon between the U.S. government’s cost of borrowing money and rates offered to homeowners. Normally, 10-year U.S. Treasuries set the tone for 30-year mortgages, but the gap between them is now 2.9 percentage points, near levels last seen in late 2008 and early 2009. In the last five years, it’s averaged closer to 1.74.

Consumers could grab rates as low as 2.25% on traditional 30-year government-backed mortgages if markets were behaving normally, according to , whose software is used by much of the industry. Bankrate.com was showing average rates above 3.5% on Friday.

The Fed’s aim is to support the smooth functioning of mortgage-securities markets so that American households can benefit from lower rates, Lorie Logan, who leads the central bank’s open-market operations desk in New York, said in a speech last month. She cautioned that the Fed’s support doesn’t mean “restoring every aspect of market functioning to its level before the coronavirus crisis.” A spokesperson for the New York Fed had no additional comment.

In interviews, executives at mortgage lenders, service providers and across the securitization industry said the margin calls created enormous tensions. The need to pony up cash set off a stampede by nonbank lenders to finish up loans and get them off their books. But to do that, they needed help from other parts of the industry facing their own challenges amid the pandemic.

Several senior executives said the impact of margin calls is abating but will continue to be felt through June, when mortgages from the spring are finally closed and sold. In the meantime, that means less competition to drive down rates.

, one of the country’s biggest home loan providers, agreed to make a record number of loans in March but pulled back in April in response to the market turbulence, said , the company’s chief strategy officer. It cut underwriting time from a few days to just hours so it could close loans as quickly as possible.

The hurdles to offloading loans are myriad.

Fannie Mae and Freddie Mac, the government-owned mortgage giants that buy loans and bundle them for sale to investors, are offering to pay significantly less for debts than their implied value in related mortgage securities, industry executives said. The enterprises, bailed out by taxpayers a decade ago, guarantee mortgages they take on and are facing unprecedented uncertainty as the coronavirus pandemic costs tens of millions of Americans their jobs.

A representative for Fannie Mae said the company’s pricing derives directly from mortgage-backed securities and reflects market rates. A spokesperson for Freddie Mac echoed that, adding that mortgage lenders’ capacity constraints are what’s driving the divergence between interest rates on new loans and yields on mortgage securities.

Other large financial institutions that normally buy mortgages from smaller lenders pulled back too, Rasori said. Some funnel key paperwork to offices in India that were temporarily shuttered by outbreaks. Those purchases are just starting to ramp back up.

Government-ordered social distancing is tying up property appraisals and processing. One bottleneck formed at , one of the nation’s largest keepers of mortgage paperwork. Loan sellers need BNY Mellon to certify their documents before buyers such as Fannie Mae can wire the cash. What used to take two days has been taking five, industry executives said. Such waits force lenders to ease off on new loans, said , vice president of capital markets at

“We are actively engaging with clients, partners and market participants regarding our processes given the extraordinary levels of market activity,” BNY Mellon spokesperson Madelyn McHugh said in an emailed statement. Chief Executive Officer Thomas Gibbons acknowledged in late March that some work was , but said it had so far “been very limited.”

Interest rates on home loans are also tied to the health of the mortgage servicing industry, the low-margin business of handling monthly payments. The right to service mortgages is sold as an asset to companies that earn their money back by collecting fees over time. The pandemic drove down the value of existing rights by making it harder to collect debts and by prompting creditworthy borrowers to refinance.

When servicing rights drop in value, mortgage originators have to charge more to compensate, pushing up the cost of new loans, said , an executive vice president at .

Hedging is normally an obscure part of the $11 trillion U.S. mortgage market. Most home loans are backed by the government and packaged into securities, many of which are created via To Be Announced trades, in which investors agree to buy securities that meet generic criteria, sometimes months in advance.

The process helps almost everyone involved: Borrowers lock in rates much earlier; lenders sell loans long before they’re finalized; trading is easier for investors. But lenders assume a risk when they promise low rates far in advance. If interest rates rise before the loan is sold, it loses value. Most lenders set up hedges, often shorting mortgage securities issued by government-controlled home loan giants.

A group affiliated with the Federal Reserve Bank of New York recommended in 2012 that lenders and dealers collect margin from each other on those trades, triggering early payments if prices move. A pending rule by the Financial Industry Regulatory Authority mandating margin is scheduled to kick in next year.

The surge in margin calls in March came when the industry could least afford it, mortgage bankers and their advisers said. A drop in rates weeks earlier sent households rushing to refinance, generating record applications at some large lenders. Lenders piled on massive hedges.

The daily volume of rate locks logged by Optimal Blue during the first week of March peaked at nearly five times the level at the start of the year. Mortgage bankers typically hedge 75% to 80% of their pipeline, said Jim Glennon, director of secondary services at the firm. Its pipeline and market share imply lenders may have set up hedges on roughly $400 billion of committed mortgages in March alone.

Those deals can sour quickly if asset prices jump. In just two days, went from being owed $1 million on hedges to owing dealers $5 million, CEO Jeremy Sopko said. Nations met its margin calls in part by speeding up loan closings and sales.

Shortly after the Fed’s announcement, the Mortgage Bankers Association warned that the purchases were prompting margin calls. Lenders complained that indiscriminate buying was hurting more than helping.

An industry rule of thumb is that every point move higher in TBA prices on a $100 million pipeline of prospective mortgages results in $1 million of required margin. Prices for some TBA securities rose five points in five days, Optimal Blue’s Glennon said, which on a $20 billion pipeline would equate to a $1 billion margin call.

The Fed has since slowed its buying, prompting relief across the mortgage industry. Meanwhile, the pipeline of mortgages lenders are waiting to close is about double where it was as the year began, according to Optimal Blue.