The Supreme Court is set to decide soon whether to greenlight state-court proceedings for several cases in which state and local government officials seek to hold oil companies accountable for their role in climate change.

Industry lawyers have filed three emergency requests that urge the justices to stall cases from Rhode Island, Baltimore, and Colorado municipalities, all part of a pack of state and local governments using public nuisance law against energy companies.

The Supreme Court won’t immediately consider the core legal issues. The justices will look at a procedural element: whether state-court action in the climate cases should advance while federal appeals courts decide whether that’s where they belong.

Still, the Supreme Court’s decision could shape the foundations of the burgeoning area of climate liability law.

If the court declines to step in, oil companies will have to face state-court proceedings and potentially expensive discovery targeting internal documents related to company knowledge of the links between fossil-fuel combustion and climate change.

“These are early test cases,” said Baltimore Solicitor Andre M. Davis, the city’s top litigator. “There are states and cities all over the country watching and studying these developments very closely.”

Over the past two years, officials in Rhode Island, California, New York, Colorado, Maryland, and Washington state have all filed suit.

The various legal efforts have ensnared state courts, federal district courts, federal appeals courts, and the Supreme Court. At least one nuisance case is pending at each level.

The circuit courts’ decisions will set the ground rules in 27 states where new plaintiffs could file similar litigation. 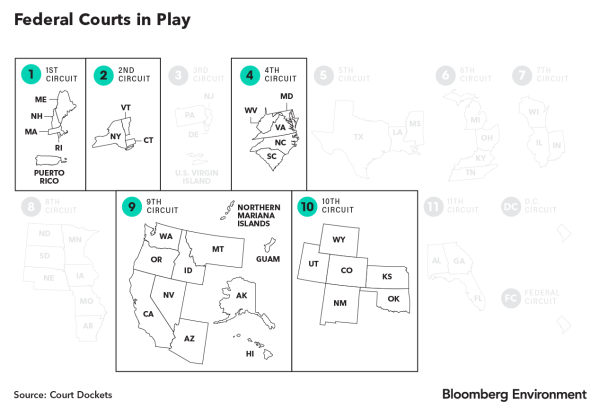 The dispute over jurisdiction is important: In a 2011 case, the Supreme Court said the Clean Air Act blocks litigants from using federal common law against greenhouse gas polluters.

Oil companies could have an easier time getting courts to toss nuisance cases if judges view them as federal claims and review them in federal court.

Federal courts have disagreed on how to handle the climate cases.

In California, two federal judges for the U.S. District Court for the Northern District of California took divergent approaches—one sent a group of nuisance cases back to state court where they were filed, and another dismissed a pair of cases after accepting oil companies’ argument that they involved essentially federal claims.

The U.S. District Court for the Southern District of New York dismissed a nuisance case from New York City on similar grounds. Industry lawyers viewed the New York case and the second California one as early signs that they could defeat the lot.

“The two courts that have ruled on the merits of the cases both dismissed under federal law because of the numerous and important national and international economic, policy and security interests,” Sean Comey, a senior adviser for Chevron Corp., said in an email.

But the companies have had less luck in more recent procedural showdowns.

“They’ve been on a bit of a losing streak,” said Ann E. Carlson, a professor at UCLA School of Law, who tracks climate litigation and has done pro bono consulting for some of the municipalities.

In the past few months, energy companies have lost three separate efforts to sideline climate cases. A federal court in Maryland rebuffed industry lawyers and sent Baltimore’s nuisance case to state court. The same happened for the Rhode Island case and one from Colorado municipalities Boulder, Boulder County, and San Miguel County.

Oil companies quickly sought help from federal circuit courts. Those courts are reviewing the remand issue but declined to immediately block state-court proceedings in Rhode Island, Baltimore, and Colorado in the meantime.

Cue the rush to the Supreme Court.

BP Plc, Chevron Corp., Exxon Mobil Corp., and other big fossil fuel companies in early October asked the Supreme Court to make sure climate trials can’t advance before the circuit courts have time to fully consider legal arguments about where the cases belong.

The urgent request in the Baltimore case is pending before Chief Justice John Roberts, who fields emergency motions from the U.S. Court of Appeals for the Fourth Circuit, which includes Maryland.

The Rhode Island request is before Justice Stephen Breyer, who handles the First Circuit. Either justice could ask the full court to weigh in on either bid.

Energy companies have also asked the Supreme Court to block state-level proceedings in the Colorado case, which has already been moved to state court.

The legal issues at play are complex. Under federal law, district court orders that remand a case to a state court generally can’t be appealed.

There’s an exception to that rule for cases involving federal officers. The oil companies say they meet that criteria because the cases involve the production of fossil fuels on federal lands and, to some extent, to meet the federal government’s demand for oil.

Lawyers for Rhode Island, Baltimore, and the Colorado municipalities dispute the federal link, and argue that even if it has merit, it doesn’t allow the oil companies to litigate broader jurisdictional questions—like Clean Air Act preemption—on appeal.

The Supreme Court sets a high bar for getting involved in any case, especially one still being litigated in lower courts.

Goldberg, the lawyer for the manufacturing group, acknowledged that reality but argued that the facts are on the oil companies’ side in the climate nuisance debate.

“It typically is challenging to have an application for stay granted,” he said, “but one of the dynamics that we hope the court is going to look at here is that these are really part of the same litigation that the lawyers that are behind all of this have chosen to file in multiple jurisdictions hoping one or two will go forward.”

The California-based firm Sher Edling LLP represents the eight California municipalities that have filed nuisance cases, as well as Rhode Island and Baltimore, but it isn’t involved in lawsuits from New York City or Boulder, Colo.

Chapman University law professor Donald Kochan said he generally agrees with industry lawyers that climate nuisance lawsuits are misplaced, but he thinks the bid for Supreme Court intervention at this stage is ill-fated.

“These cases are just too premature for the court to be confident enough in the merits to interfere at a procedural stage in order to somehow speed their access to the merits claims,” he said. 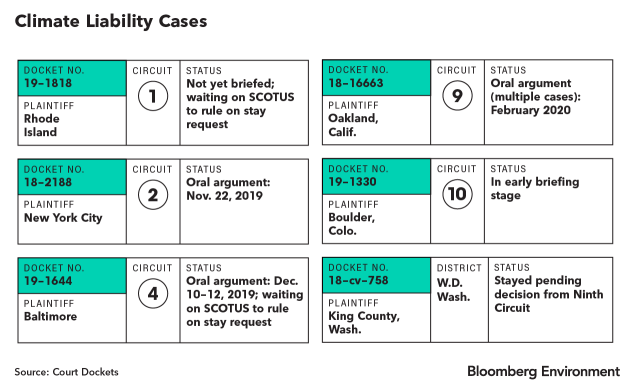 Kochan specializes in property and constitutional law, and has been following the climate cases from those angles.

“Here, what you have is a long tradition of states being able to use their tort law to deal with harm that’s caused to their residents,” he said.

States have used public nuisance law to go after tobacco companies, lead paint manufacturers, and, most recently, opioid makers. New York is also using securities law to go after Exxon for allegedly misleading investors on financial risks associated with climate change. A trial in that case is set to begin Oct. 22.

The climate cases have a long way to go no matter what the Supreme Court decides.

If the cases can move forward in state court, the plaintiffs can reach one of their biggest targets: discovery. That process could involve depositions of oil executives and production of internal documents.

But there’s no guarantee of a quick trial, or a trial at all. Davis, the Baltimore solicitor, said he expected an “avalanche” of legal motions from oil companies trying to delay or halt the cases. And the two sides could settle the litigation.

It’s unclear when or whether the heart of the debate—whether fossil fuel producers should pay for the impacts of climate change—will reach the Supreme Court.

“I think they’ll wait until there’s really a meaty legal question, and even then they might not take it up,” UCLA’s Carlson said.

“But,” she added, “I think prognosticating about this court is also hard.”

—With assistance from Porter Wells.