Craig Katerberg is working with about 100 outside law firms in addition to his in-house team of 129 people in a new job that’s brought the chief legal and corporate affairs officer of Budweiser Brewing Company Asia-Pacific Limited to the other side of globe.

“When you’re operating in a culture that is not your native culture, you try to triangulate information as much as possible to minimize your blind spots,” said Katerberg, who first joined Budweiser APAC’s parent company nearly a decade ago. “Part of that is talking to a lot of different people and understanding their perspectives to try to get a little bit of a mosaic view of what might be going on and what you don’t understand.”

Anheuser-Busch and Budweiser APAC produce over 50 brands of beer internationally, including Stella Artois, Corona, Hoegaarden, and, of course, Budweiser. Earlier this year, Katerberg moved to Hong Kong, where Budweiser APAC is headquartered, and he plans to relocate to Shanghai. He now oversees legal for markets including China, South Korea, India, and Vietnam.

Katerberg previously held a variety of positions in the U.S. and abroad for Anheuser-Busch InBev, including global legal director of M&A and commercial and head of M&A for Asia-Pacific. He started his career with Simpson Thacher & Bartlett.

Katerberg, who said his favorite beer is Goose Island, spoke with Bloomberg Law about how he chooses between international firms and local ones in Asia and how he works across cultures.

Bloomberg Law: Are the matters you worked on in the U.S. different from what you work on now in the Asia-Pacific region?

Craig Katerberg: The matters do change in quite a lot of ways. A lot of it is geography specific because the regulation is vastly different in India versus China, to pick a couple of examples, so the substance itself will change, but a lot of the larger themes are similar. You’re thinking about compliance with laws and making sure that you have the right protocols and systems in place. What is your litigation exposure? How is it that you put together contracts? There are definitely macro similarities, but the substance itself varies quite a lot jurisdiction by jurisdiction.

BL: Does that mean you rely heavily on outside counsel for these international issues?

CK: Less than you would imagine for a role like this one. Certainly, we will go for specialized expertise to outside counsel or for major transactions where we’re looking for expertise in a particular area, but for me, I rely a lot on our in-house counsel team, and then on a lot of the relationships that we’ll have with outside counsel as well.

When you’re operating in a culture that is not your native culture, you try to triangulate information as much as possible to minimize your blind spots. Part of that is talking to a lot of different people and understanding their perspectives to try to get a little bit of a mosaic view of what might be going on and what you don’t understand. So you try to make up for that the best way that you can, and often that’s with outside counsel, but more often it’s with in-house people who know the business extremely well, talented lawyers in their own right who are really close to the facts, and they’re the ones who make most of the decisions.

BL: How many outside firms do you have now?

CK: We’re looking at about 100 different firms for Asia.

BL: Is that because of all the geographic differences? 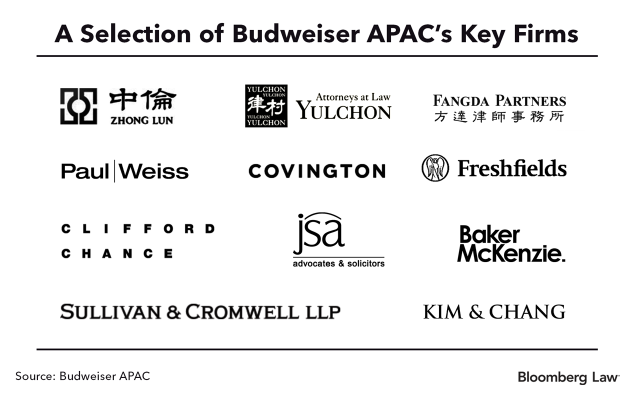 BL: How do you decide what kind of firm to use for different matters?

CK: When I think about where we go, it’s not international versus local. It’s who understands best that issue, and who have we worked with on similar matters in the past that we think would do the best job.

Let’s say for example it’s contracts that you’re doing. In a lot of cases, an international law firm can do it, and they’ll do a really good job and they’ll throw a lot of resources at it, but they might miss some of the local issues that are coming up or the industry specific issues. Or you could go with a local law firm that has expertise in the latest areas, but it’s kind of missing the more global trends and it wouldn’t be able to throw as many people behind it.

We have 52 breweries across Asia, and a lot of times there will be local specializations, so we work with lawyers from the particular city or municipality who will know best the situation there. Some of them are very small firms or single sole practitioners, but they’re best equipped and we have a relationship.

Other times, it’s national or international firms that we’ll work with on a repeat basis that we have long term relationships with, in many cases, both personally as well as institutionally. That’s Sullivan & Cromwell. That’s your Freshfields, your Clifford Chance, your Skaddens, your Covingtons. We have trusting relationships that predate many of the people on both sides, and hopefully last well into the future because many other people are going to be sitting in the same seat on both sides and good relationships survive all those people.

CK: If you look at the sticker price, often that’s the case, but not always. When you factor in discounts and then efficiencies and number of bodies, who’s working on different areas, the actual value at the end of the day and the money going out the door is not always the same.

For any matter that you’ve bid out, if it’s M&A or litigation, the responses that you get seem much more attuned to what they think the client will pay rather than: What is the matter? Or, how can this be done in the right way? So it’s not that there’s an advantage to international versus domestic firms, it’s more about how much trust you have that a law firm is going to do the matter in the best possible way and most efficient way. That’s something that is a big area within technology—pricing could be much better in terms of the predictive side. But we’ll see. I think it’s coming.

BL: Do you approach diversity and inclusion differently when working internationally?

CK: Candidly, gender diversity is probably the easiest one to just identify. If you think about LGBTQ and others, that is something that is harder to identify in Asia, I would say, where it’s not necessarily as spoken about. You have to create the inclusive environment yourself and make it fine to talk about in those areas, but you certainly are mindful about people’s comfort levels and society’s comfort levels on different topics. You try to respect that while promoting your own values and your corporate values at the same time. It can be different, depending on the country.

We don’t do teams on large deals that are without diversity. We’re looking for gender diversity, but also looking at kinds of experiences, where people have come from, any of those markers. If we’re seeing that it is not a diverse group of attorneys and paralegals and others who are being staffed on a deal, it’s something that counts negatively against the firm.