No matter how Stephen Breyer’s time on the U.S. Supreme Court is remembered, he may go down in history for the overwhelmingly bipartisan vote that got him there.

Nearly 80% of Senate Republicans supported his 1994 confirmation, a proportion of the opposing party that no nominee has gotten since—or may ever attract again.

Broad bipartisan support for a Supreme Court nominee is “a relic of the past in the short run,” said Neal Devins, a professor at William & Mary Law School who studies nominations.

Breyer is retiring, according to a person familiar with the justice’s thinking. His departure after more than 27 years on the court opens the door for President Joe Biden to appoint his successor and if recent confirmations are any indication, it will be a heated partisan battle. Biden’s pledged to appoint the court’s first Black woman. 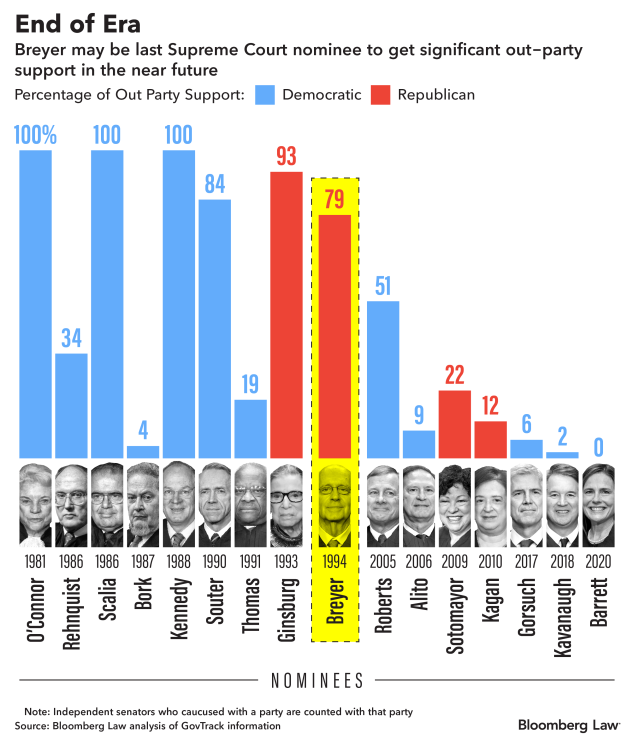 To be sure, intense confirmation fights predated Breyer. Democrats overwhelmingly opposed Reagan nominee Robert Bork for what they said were extreme conservative views and Clarence Thomas, nominated by George H.W. Bush, due to sexual harassment allegations.

But cross-party support otherwise remained the norm at the time Bill Clinton selected Breyer to replace the retiring Harry Blackmun. It used to be that a nominee who was well-credentialed and received a good recommendation from the American Bar Association would be confirmed, Devins said.

Things started to change in 2005 when John Roberts received support for his nomination as chief justice from just 51% of Senate Democrats, including Independent Jim Jeffords who caucused with them. A few months later, only 9% of Democrats voted for Samuel Alito following a filibuster. Both Roberts and Alito were appointed by George W. Bush.

Justice Sonia Sotomayor, nominated by Barack Obama, received less than 22% of Republican votes. All the other nominees received 12% or less of minority-party support, with Trump nominee Amy Coney Barrett receiving zero votes from Democrats in a confirmation fight during the final months of the 2020 presidential campaign.

Sheldon Goldman, a professor emeritus for the University of Massachusetts Amherst, said the increased polarization puts “a great deal at stake,” including the court’s integrity and legitimacy.

Breyer also benefited from a reputation working across the aisle as chief counsel of the Senate Judiciary Committee for two years starting in 1979.

At an October 2020 event, Breyer fondly recalled riding his bike to Capitol Hill at 7:30 a.m. for breakfasts with staffers for Chair Edward Kennedy (D-Mass) and the panel’s top Republican, Sen. Strom Thurmond (R-S.C.).

“The rule was no surprises. No tricks,” Breyer said. The three staffers would talk about what was going to happen that day as an act of “open conniving,” he said. “Everybody knew we didn’t like secrets, and I think it worked pretty well,” Breyer said.

Senators had few concerns about Breyer’s ideology and when asked about his confirmation in a 2008 oral history interview, he recalled the “big troublemaker” was a Democrat: Sen. Howard Metzenbaum of Ohio. Metzenbaum raised concerns about whether Breyer family investments in Lloyd’s of London might pose a conflict of interest.

It did little to impact his 87-9 confirmation vote.

Breyer gained support from Republican leaders during his hearings. Thurmond, who voted to confirm Breyer, called him “an able man and a fair man.”

Sen. Orrin Hatch (R-Utah), then the committee’s ranking member who also supported Breyer’s confirmation, said he believed in giving deference to the president in making choice for the Supreme Court and called Breyer “an excellent selection.”