Media appearances like recent spots on CBS News and NBC Chicago aren’t the only thing keeping the internet personality known as the “Korean Vegan” busy. She’s also a partner and trial lawyer at Foley & Lardner, one of the country’s 50 largest firms.

“The Korean Vegan will always take a backseat to my clients,” she told Bloomberg Law.

Molinaro is one of at least four Big Law attorneys moonlighting as internet stars on TikTok, a social media platform that’s home to more than 100 million U.S. users who create and share short videos.

Some lawyers at Kirkland & Ellis, Morrison & Foerster and other huge firms explore their interests outside the legal profession, while others demystify the world of Big Law on the app. The support of their heavyweight firms may signal a cultural shift amid a scramble for talent in a traditionally straight-laced industry.

“Law firms have realized that the younger generation is different, and different is not bad,” said Jan Jacobowitz, a legal ethics consultant who’s written about millennials’ influence on the legal profession.

TikTok was a source of solace in the pandemic’s early months for some Big Law attorneys, as it was for many others. The application was the most downloaded in 2020.

The platform’s diverse content kept Cecillia Xie, an associate at Morrison & Foerster, entertained as she sheltered in place in hard-hit New York City. Lockdown orders crushed her in-person birthday plans in April 2020, so the self-proclaimed extrovert celebrated with her first TikTok post instead.

The video poking fun at the different ‘work from home’ realities of lawyers and marketing professionals was an instant hit, racking up more than 900,000 views. 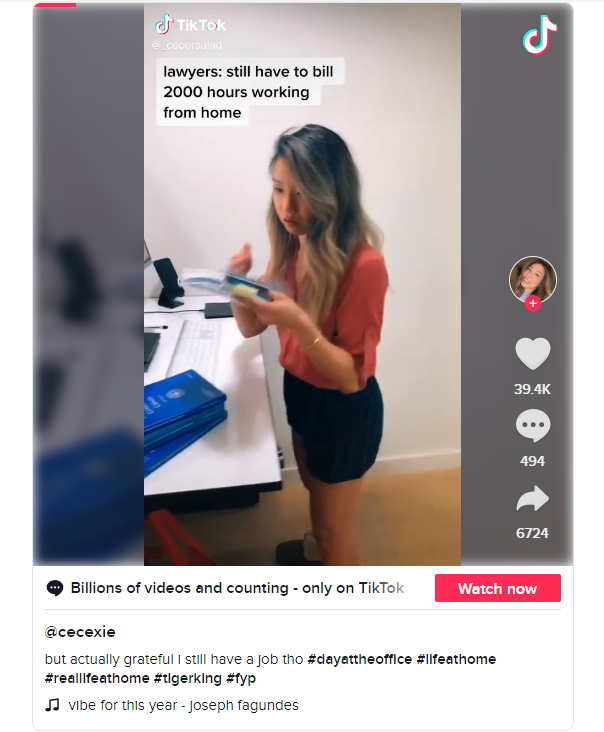 “I was astounded by how the algorithm worked and how much discoverability the app had in terms of pushing my content,” Xie said.

The fun pastime became a window into Xie’s New York City lawyer lifestyle as she debunked the myths of law school and the law profession. Her page has grossed over 270,000 followers.

“People want to know what the truth is and what is the good and the bad about the legal profession,” she said.

Molinaro, a bankruptcy litigator in Chicago who also downloaded the app in quarantine, started her TikTok journey with similar lawyer lifestyle videos and a dash of commentary on the Trump presidency and mass pandemic denial. She wanted to explore territory outside of her food blog, by then a four-year venture.

“This was an opportunity to show a different side of myself,” she said.

She couldn’t stay away from TikTok’s food community, whose members inspired her to try making video recipes within the app’s 60-second filming limit.

Accompanying each video are stories from the daughter of Korean immigrants’ childhood and family, meant to spread compassion for the immigrant experience in response to Trump administration policy changes, she told Salon last year. She now shares these stories with some 2 million followers.

Molinaro’s videos sometimes impart life advice as she sits before a table and prepares a meal. Her post on dealing with a breakup is currently her most popular, with 9.7 million views. 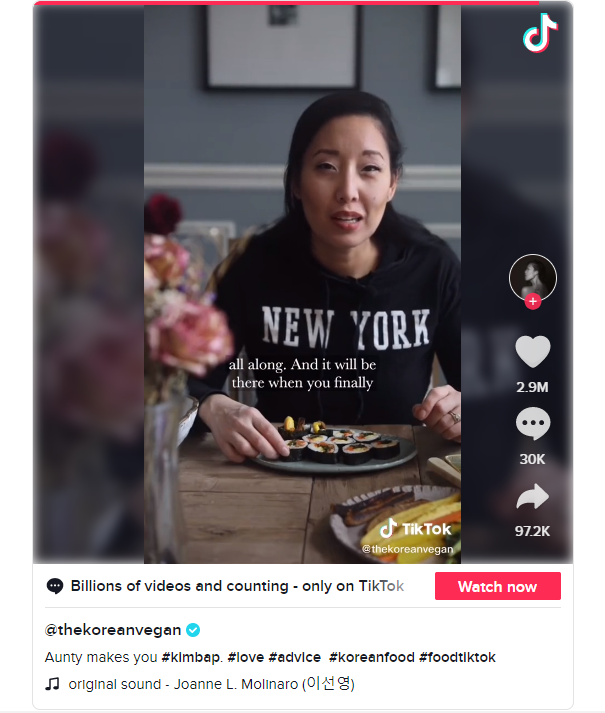 Social media personalities like Chrissy Teigen and Yashar Ali have circulated Molinaro’s videos. She’s also appeared on the Food Network and Al Jazeera English to share her recipes and talk about the identity-shaping power of immigrant food.

Chukwufumnanya “Fumnanya” Ekhator, an associate at a major Pennsylvania-based firm that she asked not be named, was already an internet creative before she joined TikTok.

The seven-year YouTube veteran’s channel features makeup tutorials, dating guides, and law school advice, among other videos. Her TikTok, which she created in late 2019, continues many of these themes.

Ekhator’s videos on the app have evolved like those of many of her Big Law peers, morphing from law school jokes to social justice advocacy amid last year’s protests. Now she’s focused on lifestyle tips, relationship advice, and mental wellness.

The daughter of Nigerian immigrants hopes her videos change her 100,000 followers’ perceptions of what a Big Law attorney can look like. She’s more than a Penn Law graduate or young professional at a top global firm, she said.

“I’d never seen any lawyers that I felt I could relate to, so for me, it’s almost about not letting this idea of professionalism or this idea of what a lawyer acts or sounds like be a limit to my online personality,” she said.

“If you’re looking at this profession and you’re not seeing yourself reflected in the people that you look up to, here’s someone that you might have something in common with.”

Sam Santopoalo, an associate at Kirkland & Ellis who’s also garnered a large TikTok following, did not respond to a follow up interview request.

The three lawyers say their firms see these platforms as a sphere for self-expression outside the workplace.

“They’ve been really supportive about me doing my own thing, being my own person, and bringing myself to my own social media account,” Xie said.

Ekhator says a partner at her firm lit up as they asked the 2020 law school grad last year about her YouTube channel and how she handles internet trolls. Another partner asked her for filming and editing advice while making a video for the firm.

This online freedom is due to active transparency and communication with their firm’s management and PR and marketing teams, the women say.

Molinaro said she agreed to delete a TikTok video in which she defended her work ethic following a fellow attorney’s criticisms.

“There was an ongoing dialogue between myself and the firm’s PR manager,” she said.

The women say clear social media guidelines, such as omitting affiliation with one’s firm online, keep them in check. Most political commentary is acceptable if shared solely as one’s own opinion, Xie said.

Molinaro says she gained approval before writing an Atlantic op-ed criticizing lawyers who litigated Trump’s election fraud allegations, an experience she recounts in another TikTok post.

“Everything was always decided in advance, where I was in constant communication with the firm’s PR to make sure they were okay with everything I was doing,” Molinaro said of the Atlantic op-ed.

Firms’ leniency on attorneys’ social media personas may be thanks to millennials’ impact on the business of law, Jacobowitz, the legal ethics advisor, said.

She observed a cultural clash between three generations of lawyers—baby boomers, Generation X, and millennials—in a 2016 paper. Jacobowitz explored conflict among age groups in their outlooks on professionalism, work-life balance, and digital communication.

Today she’s seen increased cultural competency between the generations: “Firm management has realized that the better way to approach these differences is to embrace them, understand them, and develop guidelines that everyone can live with.”

But recruiters warn that the cultural shift hasn’t reached all of the industry and may be short-lived, in some cases.

Firms are desperate to recruit and retain corporate associates as the pandemic wanes and client demand increases, doling out big bonuses and boosting starting salaries to more than $200,000 a year.

“There is a shortage of associates, so some of these judgments about social media may be withheld,” said Kay Hoppe, a Chicago-based veteran legal recruiter.

Jacobowitz said associates will have to gauge firm culture if they want social media freedom.

“In that setting you’ve got to just find a place where you can do what you want, while also following general legal ethics rules,” she says.

—With assistance from Molly Ward