President-elect has vowed to reverse President ’s policies on matters of racial justice after the killing of George Floyd and the Covid-19 pandemic intensified the political spotlight on those issues.

But to do that, the incoming administration will need to find ways to act independently of Congress, with Biden unlikely to secure passage of major legislation.

One high-profile item, for example, is lifting the Trump administration’s restrictions on consent decrees—court-ordered agreements between local law enforcement departments and the Department of Justice to improve police practices. Critics said the Trump move halted efforts at systemic police reform, and Biden, in his campaign platform, said he would again use consent decrees and pattern-or-practice investigations “to root out unconstitutional or unlawful policing.”

“President-elect Biden has called systemic racism one of the four crises facing our nation, and during the campaign he put forward a bold, intentional agenda to tackle this epidemic and advance racial equity,” said Biden transition spokesman Jamal Brown. “He believes we need to use every tool at our disposal to rip out inequities, and is taking action now to be ready to implement his agenda on day one.”

While Biden has several options for independent action, his moves will be closely watched by allies who are pressuring him to act quickly to undo Trump’s policies on race.

A crucial way for Biden to act independently of Congress is by rolling back Trump-era regulations that touched on racial justice.

In July, the administration revoked AFFH, which requires HUD to police how potential homebuyers or property owners can face discriminatory action by landlords, localities, and housing industry officials. And in September, HUD issued a final rule on implementing the Fair Housing Act’s disparate impact standards, which are intended to protect minorities from practices and policies that could have an unintentional adverse impact. The changes established additional steps plaintiffs would need to take to prove housing discrimination.

Fair-lending groups are pressing the Biden administration to repeal the Office of the Comptroller of the Currency’s Community Reinvestment Rule. Critics say results in money intended to help low- and moderate-income communities going instead to projects such as luxury real estate developments. The Federal Reserve is pursuing its own rewrite of the rule.

On the labor front, worker advocacy groups and business organizations have called for Biden to undo a controversial executive order, signed by Trump in September, which limits the kinds of diversity and inclusion trainings federal contractors can provide for their workforces.

On Wednesday, a California federal district court judge issued a nationwide preliminary injunction halting its enforcement. But the order has already had an impact on contractors’ training programs, and the priorities of the Labor Department’s Office of Federal Contract Compliance Programs, which is tasked with carrying it out. 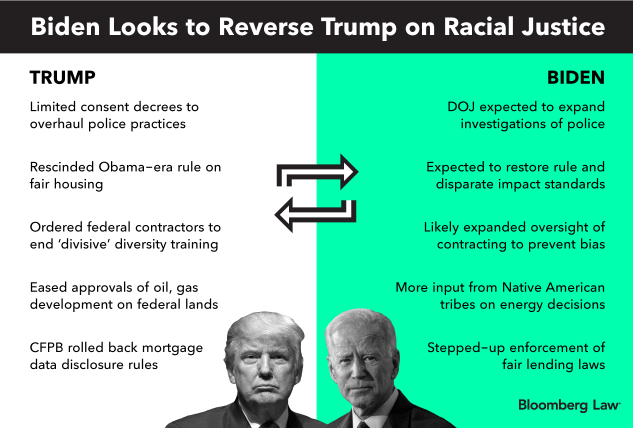 Biden will be able to act unilaterally to set enforcement priorities for agencies and direct a greater focus toward racial justice. Biden’s selections for many agency leadership positions have already highlighted a shift from the Trump administration, where many officials seemed at odds with agency missions.

Another important focus area for advocacy groups is for Biden to step up protection of civil liberties, in particular voting rights. Civil rights groups want to help DOJ prioritize voting protections across the country through a proposal spearheaded by the National Lawyers’ Committee for Civil Rights Under Law.

The plan would study “barriers to the ballot across the country and put forth proposals that could ensure a more uniform and fair system of voting in federal elections,” said Kristen Clarke, the group’s president and executive director.

Farmers who inherited land without a will are seeking more help from Biden to hold on to their properties. Operators of so-called heirs’ property—who include many Black, Native American, or Hispanic farmers, and people in Appalachian communities—lack clear title to land ownership and can’t collect disaster aid or qualify for some government programs.

The 2018 farm bill created an heirs’ property program under the USDA to help operators clear their titles and obtain farm numbers to qualify for agency programs. But advocates say more must be done.

Under Biden, USDA could also establish an independent civil rights oversight board to review civil rights complaints filed against the agency and investigate reports of discrimination.

The Consumer Financial Protection Bureau is expected by advocates to be given new priorities and to step up enforcement of fair-lending regulations.

The Trump White House restructured the bureau in a way that essentially demoted fair lending enforcement. In 2018, then-Acting Director Mick Mulvaney rolled back an expansion of mortgage disclosure rules put in place by the Obama-era CFPB.

The bureau could make fair lending and anti-discrimination work fundamental under the Biden administration by prioritizing enforcement investigations and deciding how to proceed if discriminatory violations are found. Under Trump, the bureau brought only one housing discrimination case. 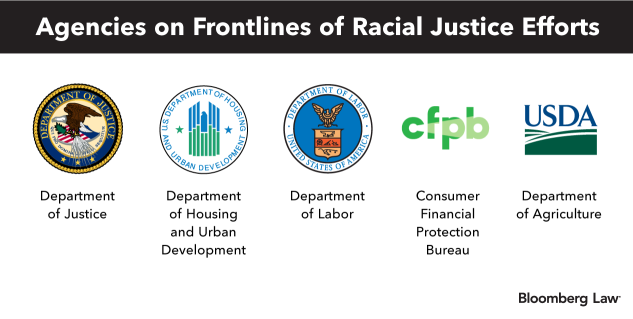 Biden is likely to push federal agencies to support greater diversity and inclusion efforts in the workplace and in education.

To make progress in closing pay gaps faced by workers of color, the Biden administration will probably look to the Labor Department’s OFCCP, which has litigated a number of high-profile pay discrimination lawsuits, including one against

Biden could urge the DOJ to alter how it approaches anti-discrimination efforts in education, shifting the department’s recent stance on affirmative action. In August, the Trump DOJ told Yale University it had to stop considering race as part of the admissions process, or risk litigation, and it has supported litigation against Harvard University over the school’s affirmative action policies.

The Biden administration may beef up the Education Department office responsible for investigating discrimination complaints or failures of K-12 schools and colleges to respond to sexual misconduct. Lawmakers steered millions in new funds for the agency’s Office for Civil Rights to hire new attorneys and other staff, but the Trump administration didn’t make significant additions.

Advocacy groups want to see the Education Department follow through by doubling the size of OCR, said Liz King, education program director at the Leadership Conference on Civil and Human Rights.

Another top priority is environmental justice, with Biden expected to direct agencies, including the Environmental Protection Agency and the Council on Environmental Quality, to take a closer look at addressing air, water, and land pollution in Black and brown communities.

Tribal advocates expect the incoming administration to give them greater input into the federal decision-making process. That could affect numerous Trump decisions the incoming administration is expected to challenge, including oil and gas leasing in the Arctic National Wildlife Refuge, opening the National Petroleum Reserve-Alaska to new drilling, and building a 200-mile mining road across federal lands in northwest Alaska.

To contact the editors responsible for this story: at mmali@bloombergindustry.com; at jlauinger@bloomberglaw.com