President Joe Biden faces more challenges getting judges confirmed as he turns to vacancies in states with Republican senators, while trying to further diversify the federal bench and facing what could be a closing window after midterm elections.

Biden and the Democratic-led Senate confirmed a diverse slate of 40 district and appellate judges in 2021, beating out the first-year totals for every president since Ronald Reagan.

Those efforts have made judicial confirmations an important accomplishment for the Biden administration and a bright spot for progressives who hoped the former Senate Judiciary Committee chair would focus on filling the judiciary with an urgency not seen under past Democratic presidents.

“We now have a Democratic administration and Senate that stepped up to the plate and recognized that the third branch of government is as important as the first and second branches of government,” said Rakim Brooks, president of progressive judicial advocacy group Alliance for Justice. 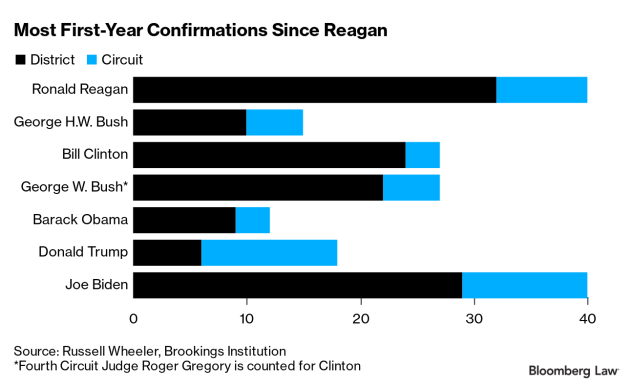 The overwhelming majority of Biden’s nominees thus far were in states represented by two Democrats in the Senate. That trend could continue for awhile as the majority of current and expected vacancies are in blue states. But Biden will likely have to begin to address vacancies in states with Republican senators in 2022.

The White House is likely to focus on filling district vacancies in states with Democratic senators or in Puerto Rico and the District of Columbia, which involve no Senate consultation, said Russell Wheeler, a visiting fellow at The Brookings Institution that follows judicial nominations. “Whether he will, like Trump, continue to shy away from confrontations with home-state senators over court of appeals nominations, I don’t know.”

Blue states are likely easier for Biden to work with on nominations, which is especially important at the district level where some home-state senator support is still being observed by Democrats. At the circuit level, however, Senate Democrats are continuing a decision by Republicans to no longer treat lack of home-state senator support—signified by not returning a so-called “blue slip”—as a nominee veto.

“To the extent that they are starting to work in purple or red states, I think that they’re really trying to have a meaningful conversation,” said Jill Dash, vice president of strategic engagement for the progressive American Constitution Society.

Biden has mostly refrained from trying to fill vacancies in states with a Republican senator. His first and only red-state nomination, Andre Mathis for a Tennessee seat on the Sixth Circuit, prompted criticism from the state’s two Republican senators, Marsha Blackburn and Bill Hagerty, about what they said was insufficient consultation.

While their support isn’t necessary for the nomination to move forward, the spat underscores the difficulty the Biden administration might face if it tries to reach an agreement on picks in red and purple states.

“The only barrier to filling those seats is a self-imposed one,” said John Collins, a law professor at George Washington University who follows judicial nominations. “I’m going to be interested to see if they tried to be cooperative during this first year, whether they finally say ‘enough is enough.’”

“He’s delivered on his diversity promise. The numbers are quite remarkable,” Ed Whelan, a senior fellow at the Ethics and Public Policy Center who follows judicial nominations, said. “I think he’s set a bar so high, I’d be surprised if he’s able to maintain it.”

Of Biden’s nominees, 75% are women, nearly 65% are people of color, and nearly 30% have experience as public defenders, according to the Alliance for Justice.

Prior to Biden’s appointments, judicial nominees commonly had experience as federal prosecutors or Big Law partners. Just 1% of circuit court judges spent the majority of their careers as public defenders or within a legal aid setting, according to a 2020 Center for American Progress report.

Biden also doubled the number of Black women judges at the circuit court level with his first four appellate appointments. In late December, he capped his nominations for 2021 by announcing his plans to select two more Black women circuit nominees: Michelle Childs to the D.C. Circuit and Nancy Abudu to the Eleventh Circuit.

Biden also promised during his campaign to nominate the first Black woman to the Supreme Court, and progressives hope he gets a chance as early as this year to do that.

Diversifying the bench, especially by increasing the number of public defenders and women of color, has been his biggest impact so far, Collins said. “That’s a really dramatic change, not just overall, but especially from the last four years,” Collins said.

Some groups want to see Biden expand the diversity of his nominations in 2022, including adding more Hispanic nominees and nominees who are disabled or have a background in disability law.

While Biden made great strides in diversity, Hispanics or Latinos expressed frustration with their level of representation among Biden’s picks. The Hispanic or Latino population make up 18.7% of the U.S. population, according to 2020 Census Bureau statistics, and 9.5% of the federal judiciary, according to Federal Judicial Center data.

The Mexican American Legal Defense and Educational Fund wanted the Biden administration to fill the second D.C. Circuit vacancy with the court’s first Hispanic or Latino judge in its history and had forwarded names of candidates for the administration to consider, Thomas Saenz, MALDEF’s president and general counsel, said.

“I don’t know Judge Childs, but I will say it was a disappointment regardless of who the nominee would be,” Saenz said. “We still believe the Biden administration has missed an opportunity to break a barrier that is long standing.”

MALDEF also recently expressed disappointment with a lack of Hispanic or Latino representation among nominees for the Central District of California, which includes Los Angeles.

In 2022, the administration could still make historic appointments. The Seventh Circuit has never had a Hispanic or Latino judge and the Fifth Circuit doesn’t currently have an active Hispanic or Latino judge, Saenz said. But early appointments are important because it can determine seniority and the order in which jurists become chief judges, Saenz said.

Brooks, of AFJ, said the administration also hasn’t included the disabled community in nominations so far, either with a nominee who has worked in disability law or who is themselves disabled, which his group would like to see in 2022.

Dash, of ACS, said she would like to see more nominees who are labor side or LGBTQ lawyers. There are also courts that haven’t seen certain types of diversity, she said. For example, the Third Circuit has never had a Black woman judge and the District of Idaho has never had a female judge. Both courts have vacancies.

“There’s a lot of progress yet to be made,” Dash said.