President urged the election of more lawmakers who support abortion rights and will seek to enshrine the protections of Roe v. Wade into U.S. law with the Supreme Court poised to overturn the landmark ruling.

“At the federal level, we will need more pro-choice senators and a pro-choice majority in the House to adopt legislation that codifies Roe, which I will work to pass and sign into law,” Biden said in a statement Tuesday. 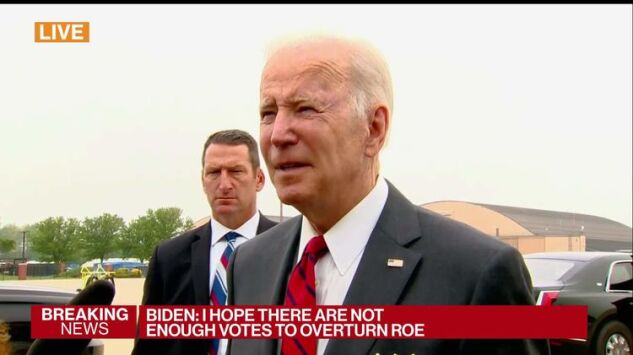 Writing the protections of the Roe v. Wade decision into U.S. statute would be one of the most difficult legislative battles of the modern era. Under current rules, abortion rights-supporting Democrats and the few Republicans who ally with them would need to hold at least 60 seats in the Senate to pass the bill over a filibuster.

At the moment, Democrats lack the votes to pass Roe legislation even by a simple majority. A House-passed bill to codify Roe was blocked in February in the Senate on a 46-48 vote. West Virginia Senator , a conservative Democrat who has obstructed much of Biden’s agenda, voted with Republicans to filibuster the measure.

Additionally, some key supporters of abortion rights -- Democrat of Arizona and Republicans of Maine and of Alaska -- have long opposed changing the 60-vote threshold for advancing such bills.

Senate Majority Leader said Tuesday in remarks from the Senate floor that he would soon force another vote on legislation to codify Roe.

Politico reported Monday night that it had obtained a draft majority opinion of the justices that would strike down the 1973 ruling, touching off demonstrations outside the Supreme Court. The court confirmed in a statement Tuesday that the draft opinion is authentic but not final.

“It concerns me a great deal that we’re going to, after 50 years, decide that a woman does not have the right to choose,” Biden told reporters traveling with him to a weapons plant in Alabama.

He also questioned the legal reasoning behind the draft decision, written by Justice .

“If the rationale of the decision as released were to be sustained, a whole range of rights are in question,” Biden said. “If this decision holds, it’s really quite a radical decision.” 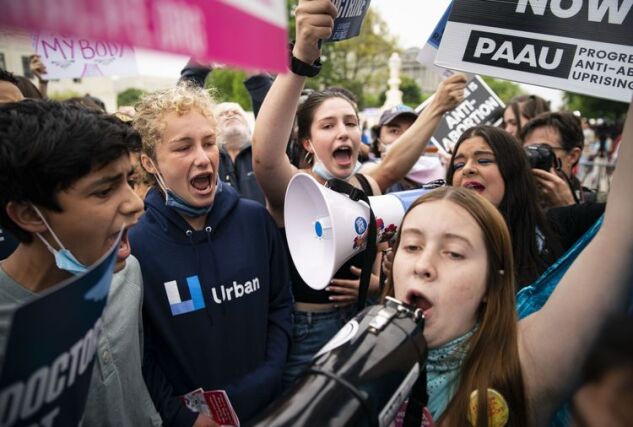 Demonstrators outside the U.S. Supreme Court in Washington, D.C., on May 3.
Photographer: Al Drago/Bloomberg

White House Press Secretary told reporters aboard Air Force One that Biden’s chief of staff, , called the president Monday night to alert him to the Politico report.

Vice President -- the highest-ranking woman ever to hold federal elected office -- said Roe’s opponents “want to punish women and take away their rights to make decisions about their own bodies.”

“Republican legislators in states across the country are weaponizing the use of the law against women,” Harris said, adding that now was the time to “fight for women and for our country with everything we have.”

Harris is scheduled to address the abortion rights group Emily’s List Tuesday evening, in what has suddenly become one of the highest-profile speeches of her political career.

Striking down Roe the battle between Democrats and Republicans for control of Congress in the November midterm elections, potentially energizing both parties’ bases. Those campaigns are getting under way with primaries Tuesday in Ohio and Indiana.

Congress’s top two Democrats -- Schumer and House Speaker -- said in a statement Monday night that the decision “would go down as an abomination, one of the worst and most damaging decisions in modern history.”

Schumer on Tuesday also accused the three justices appointed by former President -- , and -- of lying about their intentions regarding Roe during their Senate confirmation hearings.

Republicans focused on the leak of the draft ruling itself, calling for an investigation into the unprecedented disclosure. Senate Republican leader castigated Biden, Pelosi and Schumer in a statement Tuesday for overlooking what he called “an attack on the independence of the Supreme Court.”

The court’s chief justice, , said he had ordered the marshal of the court to investigate the source of the leak.

Psaki said that the disclosure “raises eyebrows for many in the country, including those in the White House, but what our focus is on right now, beyond the leak, is how we’re going to protect a woman’s right to make choices about her health care with her doctor.”

She said that the right to abortion “is supported by the vast majority of the American public.”

Just 28% of Americans support overturning Roe, according to a Washington Post-ABC News poll conducted last week, while 54% say the decision should be upheld -- a finding consistent with other public opinion surveys going back decades.

A decision to overturn Roe could reverberate through the 2024 presidential campaign and magnify attention on gubernatorial and legislative races across the country, as it would give states more power to decide the legality of abortions.

The Democratic National Committee said reproductive rights will be on the ballot in November “and this midterm election is more important now than ever before.”

“Voters will make their voices heard, we will fight back with everything we have, and Republicans will have to answer for their party’s relentless attacks on Americans’ rights,” the committee said in a statement.

In the absence of congressional action, Biden has limited avenues to exercise executive authority to protect abortion access.

His administration could challenge state laws that limit patients’ ability to receive abortion pills by mail, after the Food and Drug Administration said in December that doctors don’t have to prescribe the medication in person, said David Cohen, who teaches about gender and constitutional law at Drexel University.

At least 19 states have laws requiring a clinician to be physically present when abortion-inducing drugs are administered, according to the Guttmacher Institute, a research group that supports abortion access.

Another potential workaround: lease federal property to abortion clinics, allowing them to operate outside some state laws. But it’s unclear if that approach would survive judicial review, said Seema Mohapatra, a health law professor at Southern Methodist University,