President Joe Biden delivers an address in the East Room of the White House in Washington, D.C., on March 11, 2021.
Photographer: Chris Kleponis/CNP/Bloomberg

President Joe Biden soon is expected to announce his first judicial nominations, and much attention is focused on the potential elevation of Ketanji Brown Jackson to the U.S. Court of Appeals for the D.C. Circuit.

Donald Trump focused quickly on numerous appellate vacancies in reshaping the courts with younger conservatives, something Biden is unlikely to undo. But trial courts, where Jackson currently sits, are where Biden can change the composition of the federal judiciary right now.

About half of the current and expected vacancies Biden can fill were seats occupied by jurists appointed by Republican presidents, said Brookings Institution researcher Russell Wheeler. Most of those vacancies were inherited from Trump, and are located in states like California, New York, New Jersey, and Washington state.

“All things being equal, Biden should be able to maintain the Democratic-appointee majority on the district courts nationwide,” Wheeler said. “How much he’ll be able to do on the appeals courts is a different matter.”

Biden starts off behind his predecessors in terms of total current vacancies he has available to fill, according to a recent Brookings Institution report by Wheeler. Of the past six presidents, only Ronald Reagan in 1981 had fewer already vacant seats by this time in his presidency.

The majority of the more than 80 current and anticipated district court vacancies are in blue states, or those with two Democratic senators. This potentially makes it easier for Biden to get the home-state senator support he needs to advance a district court pick via the chamber’s “blue slip” custom.

About half of the available district court seats to fill were vacant during the Trump administration. 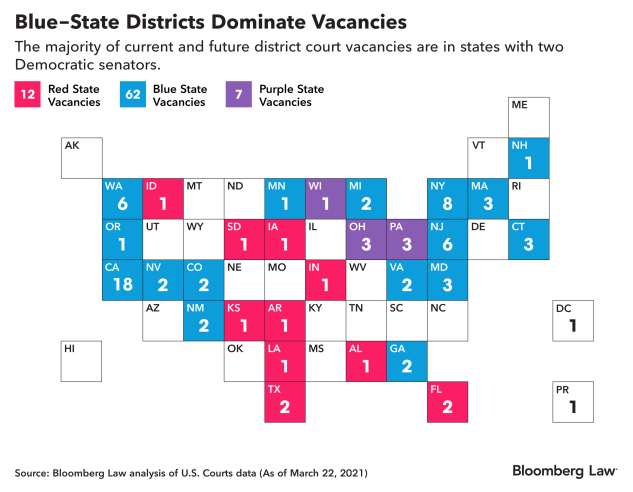 Confirmations aren’t assured in a Senate where the loss of even a single Democrat will require the Biden White House to win over Republicans in a bitter partisan climate. The administration may also be pressed for time to get nominees confirmed, which includes facing the prospect of Democrats losing control of the Senate in midterm elections next year.

“The truth of the matter is the Senate is so precariously balanced with a very slim Democratic majority that they really have to move fast,” said Sheldon Goldman, professor emeritus at the University of Massachusetts who studies the politics of judicial confirmations.

Trump inherited far more vacancies due to the Republican-led Senate, which slowed President Barack Obama’s judicial nominees for much of his tenure. In four years, Trump made more than 230 judicial appointments, including three Supreme Court justices, which accounts for more than a quarter of the active judges in the federal judiciary.

The number of district vacancies Biden inherited is due in part to the focus by the Trump administration and his Republican allies on the appellate courts, the more prominent bench and the last word for just about all federal appeals.

Appeals seats were easier for Trump to fill and may be for Biden, too. During the Trump administration, Senate Republicans did away with the blue slip for appeals courts, making it easier for the White House to pick nominees. Democrats have signaled they’re keeping the same practice in place.

The question is whether Biden can turn around the impact Trump had on the courts and do it quickly, said Maya Sen, a political science professor at Harvard and co-author of “The Judicial Tug of War: How Lawyers, Politicians, and Ideological Incentives Shape the American Judiciary.”

“With the number of appointments he has right now the answer is probably no,” Sen said. “But he can make a difference in some of the courts where it looks like the number of vacancies he has to work with might be enough to reach a tipping point.”

One such tipping point has already arisen on the New York-based U.S. Court of Appeals for the Second Circuit, a chief venue for cases involving corporations and Wall Street.

Shortly before his death, Second Circuit Judge Peter Hall took a form of semi-retirement known as senior status, opening his seat for Biden to fill. Hall was a George W. Bush appointee, and if Biden can fill his seat and two other vacancies on that court, Democratic-appointees will have a majority.

The lean of a circuit for the most part doesn’t impact cases heard by three judge panels, but it can be important for cases the court hears “en banc,” which in most circuits is every active judge on the bench.

Outside of the Second Circuit, Biden’s opportunities to impact other appeals courts may depend on judges stepping down, particularly on the California-based Ninth Circuit where a lot of Democratic appointees are eligible to take senior status, Wheeler said.

That would allow Biden to “if not change the balance, get younger judges in place,” he said of the largest appellate court.

Progressives are pushing for Biden to diversify the federal courts in terms of gender, race and ethnicity, and experience of judicial appointees. Biden has signaled he’s looking for nominees in that mold.

Sen said he could make a big impact in these areas with just a few appointments.

Biden also has an opportunity to name the first Hispanic judge to the D.C. Circuit in filling seats held by Attorney General Merrick Garland and David S. Tatel—who’s taking senior-status—and appoint a person of color to the all-White Seventh Circuit.

There are very few judges at the appellate level with public defender experience, for example, Sen said.

“You could make a pretty big impact right away by appointing people who have public defender experience on the court of appeals,” she said.