California lawyer Michael Avenatti was charged by federal prosecutors on both coasts, accused in New York of trying to extort millions of dollars from Nike Inc. and in Los Angeles of embezzling money from a client and defrauding a bank.

The charges depict a lawyer desperate for cash and willing to exploit his own clients. In California, prosecutors say, he stole a client’s $1.6 million settlement and used it to cover expenses. In New York, he’s accused of telling Nike he’d cancel a press conference accusing the company of making illegal payoffs to promising basketball players. In exchange, he demanded $1.5 million for an unidentified client, and as much as $25 million for him and another attorney to conduct an internal investigation.

Instead, Nike went to prosecutors. Within a week, Avenatti was arrested -- nabbed on March 25 as he was arriving for a meeting at the New York offices of Boies Schiller Flexner LLP, according to a person familiar with the matter. The firm was representing Nike and its lawyers wore wires to secretly record their conversations with Avenatti, the person said. 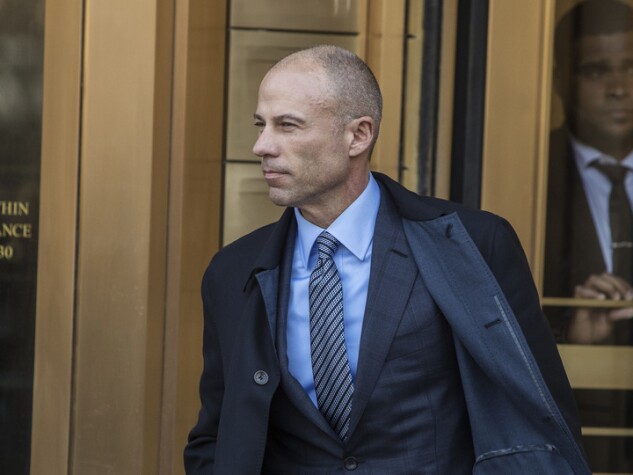 “I’ll go take ten billion dollars off your client’s market cap. But I’m not f---ing around,” Avenatti told Nike’s attorneys in a March 20 phone call secretly recorded by the FBI, according to a complaint unsealed March 25.

At 12:16 pm on March 25, just minutes before his arrest, Avenatti posted a tweet saying he would hold a press conference March 26 to disclose a “major high school/college basketball scandal” perpetrated by Nike that he claimed to have uncovered. “This criminal conduct reaches the highest levels of Nike and involves some of the biggest names in college basketball,” Avenatti said in the tweet.

“Avenatti was not acting as an attorney,’’ U.S. Attorney Geoffrey Berman said at a news conference in New York. “At its core, this was an old-fashioned shakedown.’’

Avenatti’s alleged threat appears to center on an ongoing U.S. investigation into corruption involving NCAA basketball. Nike says it’s been cooperating with the prosecutors for over a year and “immediately” told them of Avenatti’s actions.

“When Mr. Avenatti attempted to extort Nike over this matter, Nike, with the assistance of outside counsel at Boies Schiller Flexner, aided the investigation,” the company said. A call to the firm wasn’t immediately returned.

Avenatti’s tweet mentioning the scandal sent Nike shares down as much as 1.6 percent, nearing a two-month low. The stock rebounded after the charges were announced and ended the day up 0.2 percent in New York.

After being released from custody on a $300,000 bond, Avenatti said he would fight the charges.

“For the entirety of my career, I have fought against the powerful -- powerful people and powerful corporations,” he told reporters outside Manhattan federal court, declining to answer questions. “I will never stop fighting that good fight. I am highly confident that when all of the evidence is laid bare in connection with these cases, when it is all known, when due process occurs -- that I will be fully exonerated and justice will be done.”

Soon after the arrest, Donald Trump Jr. celebrated the announcement in his own tweet, saying: “Good news for my friend @MichaelAvenatti, if you plead fast enough, you might just get to share a cell with Michael Cohen!“

Avenatti faces years in prison in the two cases.

In the New York case, Avenatti told Nike beginning on March 19 that he and a co-conspirator -- identified by the Wall Street Journal as attorney Mark Geragos -- had evidence from a client that at least one Nike employee made illegal payments to the families of top high school basketball players and sought to hide that, prosecutors said. The client was purportedly an amateur basketball coach whose team had once had a contract with Nike, they said.

Avenatti told Nike’s lawyers he would hold a press conference the next day to announce the misconduct, saying he had approached Nike because he knew the annual NCAA basketball tournament was about to begin, and the company had a quarterly earnings call set for March 21, according to the complaint. Avenatti added that he would hold off on the press conference if payments were made, prosecutors said.

After the March 19 meeting, Nike’s lawyers contacted federal authorities. The next day, the lawyers telephoned Avenatti’s accomplice while the Federal Bureau of Investigation recorded the call, the U.S. said. Agents recorded two more calls that day, including one with Avenatti.

“As Avenatti threatened in one recorded meeting, if the company did not meet his demands the company might die,” Berman said. “The entire scheme played out in less than a week.”

In the California case, Avenatti allegedly defrauded a bank in Mississippi, submitting false tax returns to get three loans for over $4 million in 2014 for his law firm and a company he owns, Global Baristas US LLC. He also misappropriated a $1.6 million settlement agreement he’d arranged for a client and spent the money on expenses for a coffee company, which operates as Tully’s Coffee in California and Washington State, they said. He’s accused of wire fraud and bank fraud, among other charges.

Avenatti’s former law firm filed for bankruptcy on March 7 on the eve of legal proceedings against him in a financial dispute with a former partner, Jason Frank. The Trial Group LLP, formerly known as Eagan Avenatti LLP, sought protection under Chapter 11 and listed debts of between $10 million and $50 million and assets in the same range. Frank said Avenatti didn’t have authority to file the bankruptcy petition.

The charges aren’t the first time Avenatti’s foray into the coffee industry led to allegations of wrongdoing. His former business partner in the coffee-chain deal, the actor Patrick Dempsey, sued him in 2013 for keeping him in the dark about an “exorbitant” $2 million loan he took out that was backed by the company’s assets and future revenue.

Daniels, whose real name is Stephanie Clifford, tweeted on March 12 that she had hired another lawyer “to review all legal matters involving me.” Daniels and Avenatti had previously exchanged tense tweets regarding how he’d used money that he raised online on her behalf as part of her legal defense.

“I am saddened but not shocked by news reports that he has been criminally charged today,” she said in a tweet March 25.

The California investigation has been under way for considerable time, according to a Justice Department official. Prosecutors there announced their charges on Monday as news of Avenatti’s arrest in New York broke. Deputy Attorney General Rod Rosenstein’s office worked to coordinate both cases, the official said.

In the New York investigation into corruption in amateur basketball, prosecutors have spent years probing illegal bribery and kickbacks involving college coaches, amateur coaches and officials from Adidas AG. The case has led to convictions of a former Adidas executive, a sports agent and others who prosecutors said funneled illicit payments to relatives of prospects and concealing them.

To contact the reporters on this story: Chris Dolmetsch in Federal Court in Manhattan at cdolmetsch@bloomberg.net; Erik Larson in New York at elarson4@bloomberg.net

To contact the editors responsible for this story: David Glovin at dglovin@bloomberg.net Heather Smith