Nearly 2.1 million ballots from the 2020 election in Arizona will go into temporary storage Friday to make way for planned high school graduation ceremonies at the site of an unprecedented audit of President Joe Biden’s win in the state.

A roughly 10-day pause in recounting every ballot cast in Maricopa County, the state’s most populous, is the latest twist in the unusual spectacle led by state Senate Republicans to search for fraud where two independent audits and county vote checks have found none.

The plan to move subpoenaed ballots and equipment is sparking new concerns about securing voter data. And Arizona lawmakers and county officials continue to clash over terms of the audit, which includes the recount and other components contracted to an outside vendor whose founder has promoted election fraud theories, according to The Arizona Republic.

“It’s clearer by the day: the people hired by the Senate are in way over their heads,” Maricopa County Board of Supervisors Chairman Jack Sellers (R) said in a statement Thursday evening, noting the contractors are not certified by the U.S. Election Assistance Commission. “This is not funny; this is dangerous.”

The recount started last month at Arizona Veterans Memorial Coliseum at the Arizona State Fairgrounds in Phoenix, run by cybersecurity company Cyber Ninjas through a $150,000 contract with the Senate. It was originally slated to end Friday to make way for commencements already scheduled at the venue.

But by Thursday, auditors had only tallied about 500,000 ballots—less than one-fourth of the total, a pool reporter for The Arizona Republic tweeted, citing the audit’s liaison. It’s unclear the total cost of the audit, which includes money from private fundraising efforts, or when it will be completed. 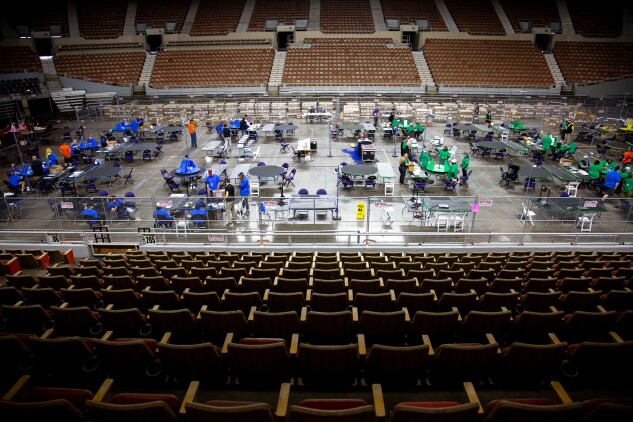 The Senate Wednesday extended its contract to use the coliseum through June 30. Ballots and other materials can be stored in another building on the site until May 23, and auditors can reenter the coliseum that day, according to the agreement.

Ken Bennett, the Senate’s liaison for the audit and a former Republican Secretary of State, said the ballots will be secured at all times at the fairgrounds with fencing, armed guards, and cameras. But Secretary of State Katie Hobbs (D) said she is “deeply concerned” about the plan to move ballots and election equipment, her attorney Josh Bendor, said in a May 11 letter to lawyers for the Senate and Cyber Ninjas.

There don’t seem to be security procedures in place, or they at least haven’t been disclosed, the letter said. Hobbs’ office has since received additional information on the move and is reviewing it, Spokeswoman Sophia Solis said Thursday.

Cyber Ninjas said in a statement that the agreement did not change audit procedures and is a political tool “simply meant to throw shade on the audit.” The company did not respond Thursday to additional questions.

Hobbs, who received state trooper protection on May 7 by order of Gov. Doug Ducey (R) following death threats related to the audit, joins groups such as the Brennan Center for Justice in raising concerns about how the audit is being conducted. Observers from her office saw a Wi-Fi router connected to audit servers, which could threaten the security of ballot images and vote counts, she tweeted Wednesday.

Meanwhile, Republican leaders in the state Senate are escalating their dispute with the Republican-led Maricopa County Board of Supervisors over what election materials must be provided for the audit. The county already delivered subpoenaed ballots and election materials, though its officials said there are no signs the election was compromised.

Senate President Karen Fann (R) sent a letter Wednesday to the Board of Supervisors arguing that the board isn’t complying with a legislative subpoena by withholding routers used during the election. Fann also alleged issues with how the ballots were delivered and noted missing data. She asked county representatives to appear at the state Capitol May 18 for questions.

The Board of Supervisors called an emergency meeting Thursday to consider legal advice related to Fann’s letter, noting that “reckless allegations have and are causing confusion and agitation at the State Legislature.” Sellers said in a statement that the board will hold a public meeting May 17 “to refute lies and lay out facts about these issues.”

County officials have said that providing the routers would compromise sensitive information. The routers were used across 50 county departments and not just for the election, Sellers has said.

“The current course is mind-numbingly reckless and irresponsible,” he said.