Hearing’s Over, Debate’s Not

The confirmation hearings for Supreme Court nominee Brett Kavanaugh are finally adjourned after four contentious days. The final day featured witnesses testifying in support of and against Kavanaugh, including, as Sen. Dianne Feinstein pointed out, a notable number of women. 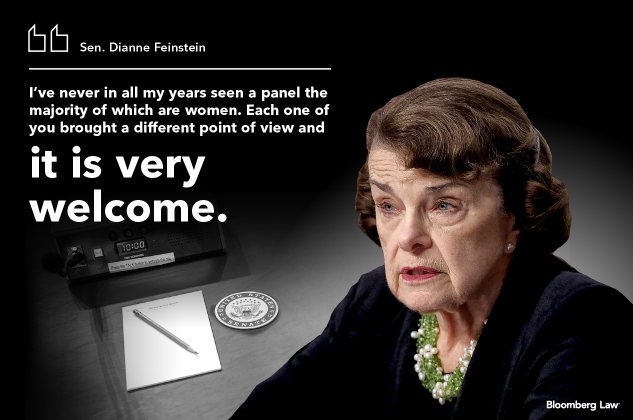 While the hearings were at times combative, it’s not clear that any senators changed their minds. Kavanaugh refused to answer questions on the most controversial topics surrounding his confirmation: abortion, affirmative action, and LGBT rights. He said he was following in the footsteps of other recent Supreme Court nominees who have declined to answer questions about issues that could come before the court.

Kavanaugh also refused to comment on pretty much anything having to do with President Donald Trump, despite invitations to do so from both sides of the aisle. He said he was staying “three zip codes away” from politics and current events.

Democrats’ appeared to be focused on painting Kavanaugh as dishonest. They pointed to several pieces of his testimony during confirmation hearings for the D.C. Circuit where they argued he lied or at least misled senators.

The most effective line of questioning related to whether Kavanaugh knew about emails hacked by a Republican aide in the early 2000s. Documents that had originally been marked “committee confidential,” but were later released, included an email with the subject line “spying” and referred to a “mole” within Democrat circles.

The debate on Kavanaugh’s honesty raged outside the hearing room today. In an op-ed published in the online magazine, Slate, a former Hill staffer who was a victim of the alleged thefts called for Kavanaugh’s impeachment from the D.C. Circuit. Meanwhile, Above the Law legal blog founder, David Lat, mounted an evidence-based defense of Kavanaugh on Twitter.

It remains to be seen if the issue will move the needle on Kavanaugh in the coming weeks, but so far, no Republican senators have indicated they won’t vote for him.

It was a star-studded day for the appellate world on the final day of the confirmation hearings. Kavanaugh was not in the room, having sat through approximately 32.5 hours of opening statements and questions during the previous three days.

In support, the witnesses included two former solicitors general, Gibson Dunn’s Ted Olson and Kirkland & Ellis’s Paul Clement, as well as Maureen E. Mahoney, a former Deputy SG, and retired partner at Latham & Watkins. Olson noted that he’s argued in front of one-fifth of nation’s justices who were appointed by one-fourth of the country’s presidents. He said he doesn’t “know of a lawyer or a judge who is more universally respected in terms of” fairness and competence than Kavanaugh. 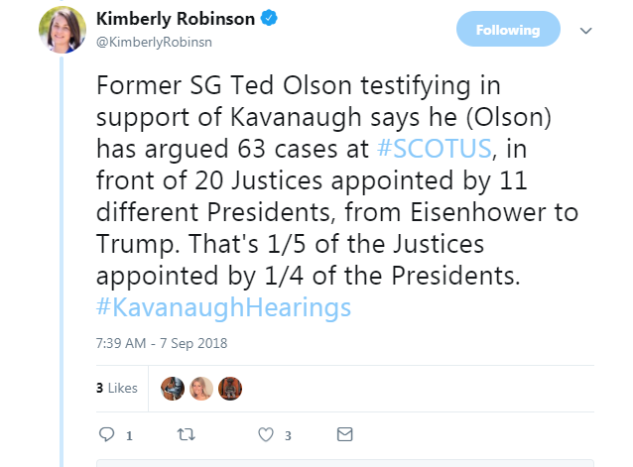 There were also several former Supreme Court clerks who spoke in favor of Kavanaugh’s confirmation. Most of them also clerked for Kavanaugh. They included Luke McCloud, of powerhouse Williams & Connolly, who clerked for Justice Sonia Sotomayor; Rebecca Taibleson, former clerk for Justice Antonin Scalia who is now an Assistant U.S. Attorney; Colleen E. Roh Sinzdak, former clerk to Chief Justice John G. Roberts Jr., now one of the SCOTUS regulars at Hogan Lovells; and Jennifer Mascott, clerk to Justice Clarence Thomas who is now at the Antonin Scalia Law School at George Mason University.

Legal superstar Akhil Amar, who teaches at Yale Law School, and who taught Kavanaugh while he was a law student, was also there in support of his former student. A Clinton voter, Amar said Kavanaugh was the best that liberals could hope for from a Republican president. “Be smart,” he warned Democrats.

The minority witnesses testifying against Kavanaugh focused more on individuals impacted by issues that may be affected by Kavanaugh’s confirmation, like a Parkland shooting survivor, a disability rights advocate, and a woman who lost access to birth control coverage. But they included appellate connections, too.

Former Sotomayor clerk Melissa Murray, now at the New York University School of Law, said that a vote for Kavanaugh was a vote against Roe v. Wade. She was joined by election law specialist and frequent SCOTUS amicus filer Peter Shane, of the Moritz College of Law, and Lisa Heinzerling, who clerked for Justice William J. Brennan, Jr., and who is now at Georgetown University Law Center. 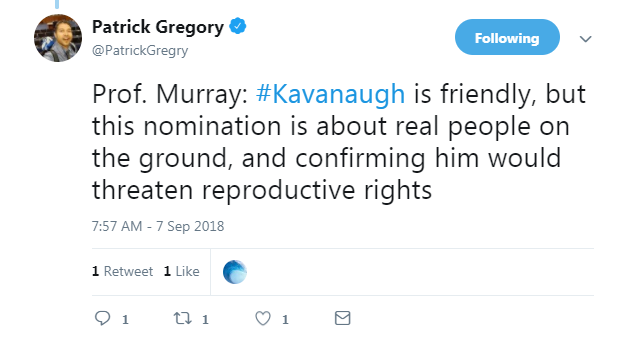 Rochelle Garza, at the center of the soon-to-be-SCOTUS case Garza v. Hargan, was also there to argue against Kavanaugh’s confirmation. He voted against her client, an immigrant teen who was seeking an abortion. She testified to the real life struggle she saw her client go through while her choice to have an abortion was delayed almost to the point where it would have been illegal under state law.

Witnesses on both sides added a personal touch on the final day of Kavanaugh’s confirmation hearing.

Student Aalayah Eastmond testified in graphic detail about the ordeal she went through during the shooting at Marjory Stoneman Douglas High School in Parkland, Fla., and suggested Kavanaugh couldn’t be trusted to protect young people from gun violence.

Sinzdak, a mentee of Kavanaugh’s, described her experience in his separation of powers class at Harvard Law School. She applauded the nominee for giving the same consideration to the views of all students and for being a “‘champion of diversity in the legal world.”

Alicia Wilson Baker, a pro-life Christian and ordained minister, testified about having been denied insurance coverage for birth control due to her employer’s religious beliefs. Kavanaugh would jeopardize access to affordable birth control across the country, Baker said.

Olson—based on his personal observations over two decades of practice at the highest levels of law—said Kavanaugh had five qualities critical for Supreme Court nominees: intelligence, respect for precedent, open-mindedness, integrity, and temperament.

--With assistance from Kimberly Strawbridge Robinson and Patrick L. Gregory

To contact the reporter on this story: in Washington at jkamens@bloomberglaw.com