In a landmark 5-4 ruling, the Supreme Court affirmed the 19th-century reservation status of the Muscogee (Creek) Nation, in a criminal case that American Indian law practitioners and scholars are applauding for its powerful affirmations of tribal sovereignty.

Justice Neil Gorsuch’s opinion on Thursday, joined by the four Democratic-appointees, over dissent from the remaining four Republican-appointees, was immediately praised by tribal supporters who labeled it a game changer.

Riyaz Kanji, who represented the Creek during the rare remote argument session in May, cheered the opinion’s “ringing endorsements that the ‘rule of law’ should prevail over the ‘rule of the strong,’ and that the promises made to Tribes cannot be diminished by claims of disruption or convenience, or by narratives grounded in a course of illegal action over time.” A partner at Kanji & Katzen in Ann Arbor, Mich., Kanji said “we’ll be quoting passages in this opinion for the rest of our lives.”

The dissenters warned the outcome could lead to scores of criminal convictions getting overturned and potentially destabilizing effects on governance in the state. Supported by the federal government, state officials made similar dire claims contested by Jimcy McGirt and the Creek Nation, which supported him on appeal.

A member of the Seminole Nation, McGirt had argued that the state couldn’t prosecute him because his crimes technically took place on Creek reservation land. A law called the Major Crimes Act confers federal jurisdiction for serious crimes involving Indians in Indian country.

That raised the broader question extending beyond McGirt’s case: Is the land at issue still the Creek’s 19th century treaty-forged reservation?

For the purposes of federal criminal law, it is, the high court said.

“Because Congress has not said otherwise, we hold the government to its word,” Gorsuch wrote in the ruling applauded by tribes and their supporters.

“The Supreme Court reaffirmed today that when the United States makes promises, the courts will keep those promises,” said McGirt’s lawyer Ian Gershengorn of Jenner & Block.

Native American Rights Fund Executive director John Echohawk said that, “in holding the federal government to its treaty obligations,” the court “put to rest what never should have been at question.”

Gorsuch put the dispute in the context of the Trail of Tears, by which the government marched the Creek, Cherokees, Chickasaws, Choctaws, and Seminoles west in the 1830s to what’s now eastern Oklahoma. State officials worried that a ruling affirming the Creek’s reservation would upend the state’s criminal and civil control, not just on Creek land but on the other four tribes’ lands as well, overwhelming federal prosecutors saddled with staggering new caseloads in the process. 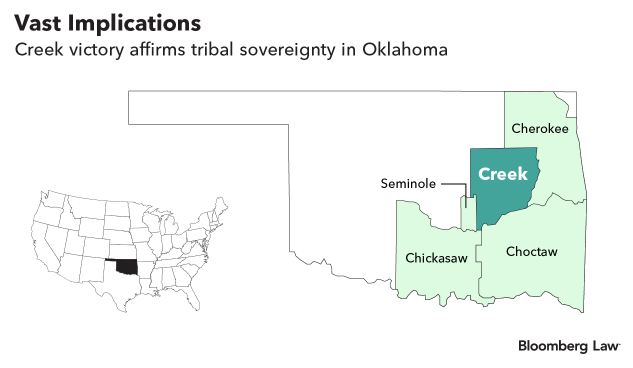 Gorsuch pushed back against the notion of the decision transforming half of the state into reservation land. “Each tribe’s treaties must be considered on their own terms, and the only question before us concerns the Creek,” he wrote.

How jurisdiction in the state is handled going forward could be determined out of court. Following Thursday’s ruling, the state and tribes issued a joint statement saying they’ve “made substantial progress toward an agreement to present to Congress and the U.S. Department of Justice addressing and resolving any significant jurisdictional issues” resulting from the decision.

Whatever happens next, the ruling will have a significant impact on Indian law, practitioners and scholars said.

Gorsuch’s opinion contained “so many things that tribes and their advocates have been arguing for for years,” said University of Connecticut School of Law professor Bethany Berger. She supported McGirt at the high court with an amicus brief on behalf of the National Congress of American Indians Fund.

Matthew L.M. Fletcher, director of the Indigenous Law & Policy Center at Michigan State University College of Law, said “it is apparent on the Indian law front that ‘extratextual’ evidence like historical practice, demographics, and just the assumptions of non-Indians about reservation boundaries should no longer be fair game, at least when it comes to treaty rights.”

The ruling is the latest in a series of high court votes in which Gorsuch, President Donald Trump’s first Supreme Court appointee, has sided with Indian interests. His nomination was supported by tribes.

It was also Gorsuch’s latest opinion siding with a criminal defendant over claims from government officials that disaster will follow. In April, he wrote an opinion for the defendant in Ramos v. Louisiana who asked the justices to overturn precedent allowing non-unanimous jury convictions. Gorsuch cautioned in Ramos against perpetuating “something we all know to be wrong only because we fear the consequences of being right.”

In McGirt’s case, Gorsuch said that the stakes “are not insignificant,” noting that, “if Mr. McGirt and the Tribe are right, the State has no right to prosecute Indians for crimes committed in a portion of Northeastern Oklahoma that includes most of the city of Tulsa.”

But he went on to say that, “if the threat of unsettling convictions cannot save a precedent of this Court” in Ramos, “it certainly cannot force us to ignore a statutory promise when no precedent stands before us at all.”

In dissent, Chief Justice John Roberts said that, on top of criminal consequences, the decision “creates significant uncertainty for the State’s continuing authority over any area that touches Indian affairs, ranging from zoning and taxation to family and environmental law.”

Yet business leaders signaled they aren’t too concerned, in light of the state and tribes’ commitment to finding a solution.

“Although we are disappointed in the Supreme Court’s decision today,” State Chamber of Commerce CEO Chad Warmington said “we remain optimistic the regulatory environment won’t be significantly altered in a manner unfriendly to Oklahoma businesses.”

Petroleum Alliance of Oklahoma President Brook A. Simmons likewise said it’s working with the state and tribes “to ensure that our members continue to have a stable, predictable regulatory and tax environment.”

The justices took up the reservation question in another criminal case last term, Sharp v. Murphy. But with Gorsuch recused, presumably due to his involvement with the case which came from the appeals court he sat on prior to his high court appointment, the even-numbered court couldn’t decide. Along with the opinion Thursday in McGirt’s case, the justices affirmed the appeals court ruling in Murphy that sided with the defendant.

—with assistance from Ellen Gilmer