The bonus scale applies to associates in the firm’s New York, Washington, and Sao Paulo offices as well as “certain associates outside the U.S.,” Dave Lewis, managing partner for Allen & Overy’s New York office, told Bloomberg Law in an email.

The bonuses are scheduled to be paid by January 15, 2019 and will be prorated for part-time schedules, unpaid leaves of absence and those that started in 2018, according to the firm.

For many years, Cravath has set the standard for bonuses, and it announced Nov. 19 what it would pay its associates. This year Skadden, Proskauer Rose, Cleary Gottlieb and other major firms have matched Cravath. And a few others, including boutiques Kaplan Hecker & Fink and Wilkinson, Walsh +Eskovitz have exceeded Cravath’s bonus rates. 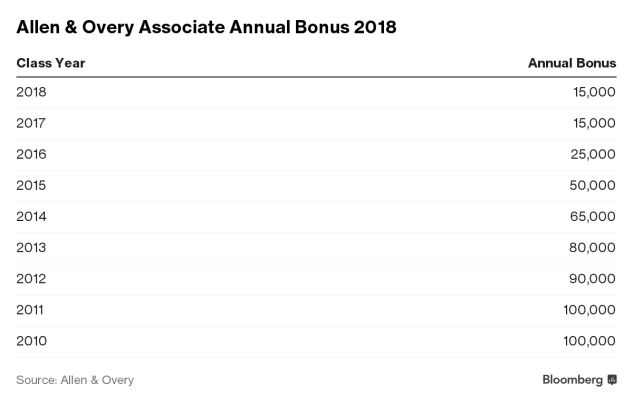 This year’s bonuses for Allen & Overy begin at $15,000 for first-year associates, a rate that’s been holding steady among big law firms for the past several years.

Allen & Overy is an international law firm based in London that employs 5,500 people in 44 offices in 31 countries.