A woman seeking to end a pregnancy in Kentucky after 14 weeks has one choice: She enters a brick building on the edge of downtown Louisville after running a gantlet of abortion opponents determined to change her mind.

Patients coming to the EMW Women’s Surgical Center on a recent Tuesday navigated as many as 10 protesters, including a preacher with a microphone, a man and boy holding “abortion is murder” signs and a woman who tried to redirect people to the anti-abortion pregnancy center next door.

“These abortionists are serial killers!” one called out as a young woman opened the clinic’s glass front door. “They don’t care about you, baby!”

The clinic is now part of a U.S. Supreme Court that could gut the constitutional right to abortion and allow sweeping new restrictions in much of the country. It’s also a place where the passions of the abortion fight play out on a near-daily basis, as women exercise what at least for now is their legal right and opponents do whatever they can to intervene.

“Patients can come in with elevated blood pressure, elevated pulse,” said Ernest Marshall, the clinic’s owner and one of three doctors who founded it 40 years ago. “We don’t know whether they have cardiovascular disease or they’re just scared to death from the protesters.”

The justices hear arguments Tuesday in a case stemming from EMW’s challenge to a Kentucky law that would outlaw the most common abortion technique after the 15th week of pregnancy. At issue is whether Kentucky’s attorney general can take over defense of the law at a late stage in the litigation. 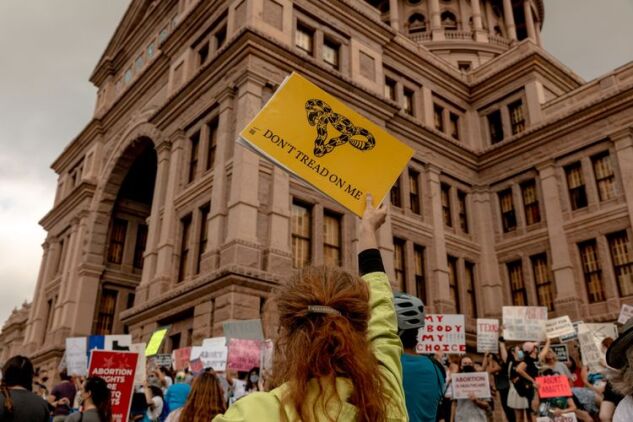 On Oct. 2, Women’s March and more than 90 other organizations organized a national rally to protect women’s reproductive rights ahead of the Supreme Court reconvening.
Photographer: Sarah Karlan/Bloomberg

The case is a prelude to a bigger clash in December, when the conservative-majority court will a Mississippi bid to overturn Roe v. Wade, the landmark 1973 ruling that legalized abortion nationwide. The high court also could be asked again to intervene in a fight over that bans abortion after six weeks of pregnancy.

The abortion issue has divided Americans for decades, helping to swing elections and becoming an unofficial litmus test for high court nominees. Most Americans supporta legal right to abortion, though many back restrictions, too. Studies show that limits on access are a crucial economic issue, particularly for the low-income women and racial minorities who absorb the brunt of the impact when access to abortion is restricted.

U.S. states in recent years have tried to scale back abortion rights with hundreds of new laws. At the same time, nations that have long barred the procedure, including and , have gone in the other direction, decriminalizing or at least liberalizing a woman’s right to end her pregnancy.

EMW is one of only two Kentucky abortion clinics, both in Louisville, and the only one where a patient can get a procedure after 14 weeks of pregnancy.

Protesters gather five days a week in the early morning hours — praying and placing signs outside the one-story building, which is just steps away from the city’s downtown hotels and office towers. 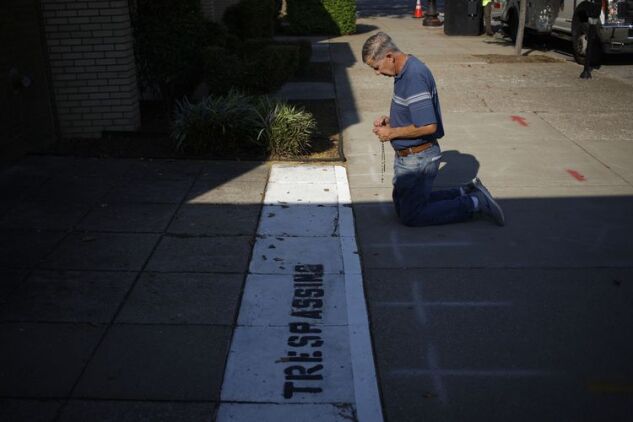 The abortion opponents on Tuesday included Carolyn Whalen, a regular outside the clinic who was part of a group of Catholics praying the Rosary.

“I just believe a baby is a baby when it is conceived. It’s a human life,” said Whalen, 83. She was there trying to speak up for the baby because “it can’t speak for itself.”

Nearby, a handful of volunteer escorts gathered as well, easy to spot in their bright orange vests. Other escorts set up outside the parking garage behind the clinic, ready to direct patients to the entrance and offer help to any who might want it.

As soon as the clinic opened at 8 a.m., patients began arriving, some alone and some with a companion or two.

A woman with a black T-shirt saying “Cheer Mama” parked in the garage and walked around to the front with an escort by her side. Another woman came from the same direction with a hoodie pulled over her head, making a beeline for the glass doors as the protesters tried to speak with her.

Others were dropped off in front of the building, where they could take advantage of the new 10-foot (3-meter) “safety zone” created by a city ordinance this year. By law, people aren’t supposed to linger within the zone, which is demarcated by two yellow stripes, though abortion-rights advocates say adherence to the rule has been mixed. 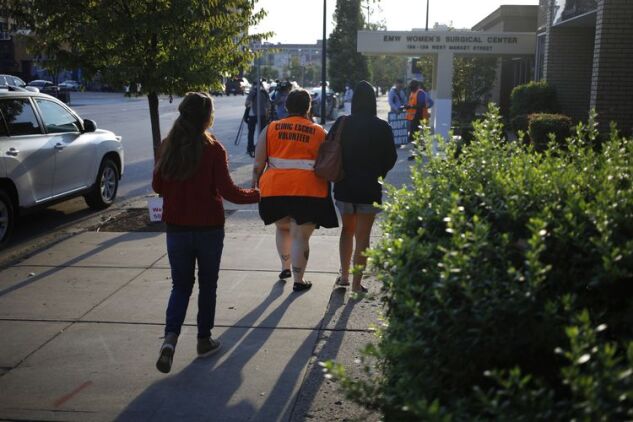 “Sir, stand up for that child!” someone shouted at a man who accompanied a woman.

Hunter Norwick, a part-time pastor at Reformation Church of Shelbyville, 30 miles to the east of Louisville, spent much of the morning using a microphone to preach toward the clinic, quoting the Bible and calling on the people inside not to “sacrifice your child to Satan.”

“We’re trying to warn them because we do love these people,” said Norwick, 30, in an interview.

Few if any women seemed to heed him. By 9:30 a.m., 13 patients had gone inside, according to Donna Durning, who’s been coming to the clinic for 27 years and uses a hand counter to tally people who appear to be patients.

One woman did stop, spending 20 minutes telling a handful of protesters about her daughter-in-law, who was 21 weeks pregnant and had just entered the clinic. The woman, a nurse who asked to be identified only as Leesa, said her daughter-in-law learned six days earlier that the fetus had a rare genetic disorder known as bilateral renal agenesis, which meant the child had no kidneys and, according to doctors, no chance of surviving.

“This baby is very much wanted, but when this baby is born, this baby will die,” Leesa told the group, at times with tears in her eyes. “If she had to carry this baby to term, all she’s going to do is grieve herself to death.”

The protesters weren’t convinced; one said that God “can reverse this curse.”

But they listened and even said a prayer with Leesa, offering a moment of understanding amid the discord.

Courtney Bennett, who had an abortion at EMW last year after learning her baby had congenital anomalies, said that after seeing the crowd out front, she and her partner abandoned their plan for him to walk her to the clinic door.

“Here you are, at least for us on one of the hardest days ever, and you’re having to figure out how to walk through a sea of sharks,” said Bennett, who was 42 at the time. “But ultimately I made the decision and said, ‘Just pull up front, I don’t want you to walk me in,’ because I did not want him to have to then walk back through everyone.”

The Roe decision marked a watershed moment for American women by providing a nationwide guarantee at a time when most states sharply restricted abortion. It survived a major challenge in the 1992 Planned Parenthood v. Casey case, when the court reaffirmed Roe while modifying its legal standard. Casey said states can’t impose significant restrictions until the fetus becomes viable — that is, capable of living outside the womb — a point that occurs some time after the 20th week of pregnancy, as measured by the woman’s last menstrual period.

In the half-century since Roe, greater abortion access alone has caused a 2-percentage point increase in women’s participation in the workforce, according to a 2019 study by the Institute for Women’s Policy Research, a non-profit, non-partisan Washington think tank that champions equality issues for women. The impact on Black women has been especially pronounced, with workforce participation up by 7 percentage points and college graduation growing by almost 10%, the report found. 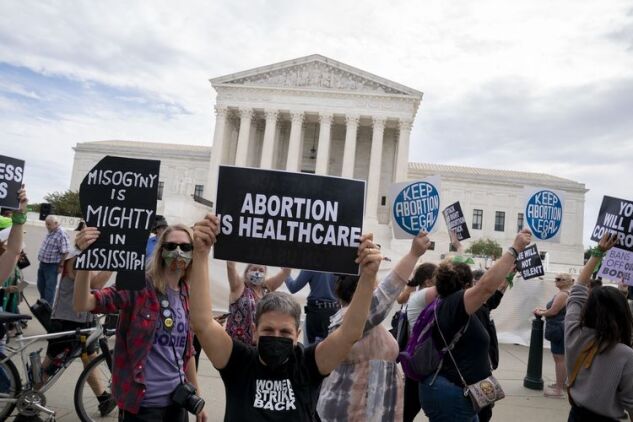 Politics have changed the court since then. With the help of some church leaders, Republicans galvanized U.S. voters around the fight against abortion. won the presidency after saying he’d nominate only justices who would oppose abortion and rewarded his supporters by appointing three people who so far have voted against abortion rights. The court now has a 6-3 conservative majority.

Democrats use support of abortion rights as a yardstick for judicial candidates as well, but last confirmed a Supreme Court nominee in 2010. Democrats are already seeking to motivate voters by pointing to the Supreme Court’s refusal to block this year’s restrictive Texas law from taking effect, with the Biden administration fighting the measure in the courts.

Kentucky’s law would affect 10 to 15% of the more than 3,000 abortions EMW performs each year. Approved overwhelming in 2018 by the Kentucky General Assembly, it’s one of a dozen anti-abortion measures the state has enacted in the last four years.

The law, which bars abortion if it “dismembers the living unborn child,” is aimed at dilation and evacuation, or D&E, a procedure that involves removing the fetus in a way that typically causes the tissue to separate. The measure applies after the 13th week of pregnancy and makes an exception for medical emergency.

“If this dilation and evacuation procedure is to occur, we want there to be humanity and compassion shown to that child, meaning that that child doesn’t feel the pain of being dismembered,” Attorney General said at a press conference last week. “It’s a gruesome thing to talk about, but it is a reality.”

In court papers, Cameron argues that providers could use one of three techniques to cause fetal death before performing the abortion. But abortion-rights advocates says those methods aren’t feasible and would add needless risk.

Medical associations including the American College of Obstetricians and Gynecologists and the American Medical Association told a federal appeals court that D&E is the safest second-trimester abortion procedure and “results in fewer medical complications and involves the administration of fewer drugs than alternative procedures.”

The brief also said the measure was based on the misguided notion that the fetus can feel pain at that stage of pregnancy. “The clearly established medical consensus is that fetal pain perception is not possible before at least 24 weeks,” the medical associations said.

For the Supreme Court, the issue is whether Cameron can take over the state’s defense of the law.

“The precise question before the court in EMW is a narrow procedural one,” said Alexa Kolbi-Molinas, an American Civil Liberties Union lawyer who’ll argue on behalf of EMW on Tuesday. But the case “is a critical part of the fight to oppose attempts by anti-abortion politicians to push abortion care out of reach and erode reproductive freedom in this country.”

Cameron sought to intervene after an appointee of Democratic Governor decided to drop the matter after the state lost an appeals court decision. A federal appeals court barred Cameron from getting involved.

“A court of appeals cannot close the courthouse doors when a state seeks only to hand off the defense of state law from one official to another without otherwise delaying the matter,” Cameron argued in a filing in the case, known as Cameron v. EMW Women’s Surgical Center, 20-601.

Should the Supreme Court let Cameron intervene, the fate of Kentucky’s law could hinge on the Mississippi case, which centers on the state’s ban on abortion after 15 weeks. The high court is scheduled to decide that case by late June.

Kentucky is also among about a dozen states with trigger bans that would take effect — and make abortion largely illegal — if the Supreme Court overturns Roe v. Wade.