President has fixed his sights on getting a payroll tax cut in the next coronavirus stimulus bill, but it’s unclear whether he can get Republicans -- much less Democrats -- to go along with such a high-cost item that likely would have only a modest impact on the economy.

Trump has been pushing a payroll tax reduction for months and on Sunday used it to draw a line in the sand as lawmakers begin haggling over another round of rescue legislation for a reeling U.S. economy.

“We’re not doing anything without a payroll tax cut,” Trump said in a town hall event hosted by Fox News. 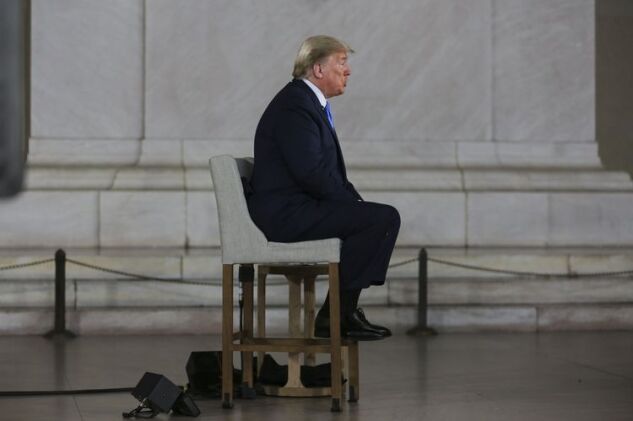 Donald Trump during a Fox News town hall in Washington on May 3.
Photographer: Oliver Contreras/Sipa/Bloomberg

But Trump hasn’t laid out his vision for the size and duration of any payroll tax cut. That would make a big difference for workers -- including those who haven’t faced adverse effects from the coronavirus slowdown -- who would see anywhere from a few dollars to several hundred in bi-weekly paychecks depending on their income.

The 30 million people who’ve lost their jobs wouldn’t get a direct benefit, and economists say a payroll tax cut likely isn’t enough by itself to bolster consumer spending -- a prime driver of the economy -- and spur companies to begin rehiring.

Politically, any payroll tax cut is a heavy lift. Democrats, predictably, are opposed to the president’s proposal. But Republicans in Congress have also been slow to publicly endorse his repeated request for the tax rollback. Senate Majority Leader hasn’t highlighted the idea and Senate Finance Chairman has said it’s too soon to decide what should be in a bill.

House Speaker on Monday declined to directly respond to Trump saying he would demand a payroll tax cut in any future relief plan. She said there are many other needs, including expanded unemployment insurance and aid to state and local governments.

“I’m not negotiating with the president on television,” she said during an interview on CNN. “There’s no need to be drawing any red line in the sand.”

McConnell and other Republicans already are signaling they want to put the brakes on additional steps by the government that would only add to a budget deficit that is forecast to balloon to $3.7 trillion this year.

, Trump’s top economic adviser, reiterated on Sunday that the payroll tax cut was a key priority for the president who wanted to lower costs on employers and employees.

“This is a tax cut that is clearly geared toward lower- and middle-income people,” said , the president of Americans for Tax Reform. “It lowers the costs of employment.”

A payroll tax cut would also help Trump achieve a political goal: a second round of tax cuts, this time geared to the middle class. He teased the idea before the 2018 mid-term elections, but never released a plan.

Trump could also use a payroll tax rollback to eliminate one of the taxes funding the Affordable Care Act, a 0.9% Medicare tax on those earning at least $200,000. Repealing that tax would likely face strong resistance from Democrats who would resist moves to undercut President Barack Obama’s health care law for a tax cut on high earners.

For every percentage point cut to the tax, a worker earning between $50,000 and $75,000 would see an average $382 more in their paycheck spread over a year, according to Kyle Pomerleau, an economist at the American Enterprise Institute. A full repeal of the employee portion payroll tax would amount to a $2,922 tax cut over twelve months, or $112 extra in biweekly paychecks.

Even with that money circulating, individuals who get the extra cash would likely be hesitant to spend the cash influx in an uncertain economy. Those willing to spend it would have fewer opportunities to do so while much of the economy is shut down.

Despite $1,200 stimulus checks for low- and middle-income adults and generous unemployment benefits, consumer spending is expected to drop significantly. Economists surveyed by Bloomberg predicted that consumer spending would decline at 25.1% annualized rate in the second quarter, according to the median response.

“I don’t see consumer spending increasing until the virus is under control,” Nicole Kaeding, an economist with the National Taxpayers Union, said. “To the extent that individuals are concerned about a second wave in the fall or concerned about the security of their own employment, they might rather save than spend.”

If Trump were to get the maximum cut -- eliminating the full 15.3% payroll taxes funding Social Security and Medicare that is split between employees and employers -- that would cost roughly $650 billion from now until the end of the year, according to Marc Goldwein, a senior policy director at the Committee for a Responsible Federal Budget.

“If you suspend payroll tax in the near term people would see a modest increase in their paycheck if they’re employed and they would probably be saving that extra money,” Goldwein said. “It won’t provide a boost to GDP in the near term.”