Senate Majority Leader is expected to release a $1 trillion pandemic relief proposal on Monday, kicking off talks with Democrats on provisions including money for people who’ve lost their jobs and protections for employers reopening their businesses.

The Republican plan will be outlined in a set of bills likely to appear Monday afternoon.

The measures, a step toward a fifth coronavirus stimulus bill, aim to extend just-expired supplemental unemployment benefits, but at a lower level; provide a new round of $1,200 direct stimulus checks; funnel money to schools to help them reopen; and approve funding for expanded virus testing.

House Democrats passed a much bigger relief bill in May, and Republicans have only a couple of weeks to bridge the gulf between the proposals. In the meantime, the safety net fashioned in March -- including unemployment aid and a moratorium on evictions -- will be getting pulled out from under millions of Americans whose lives have been upended by the coronavirus crisis. 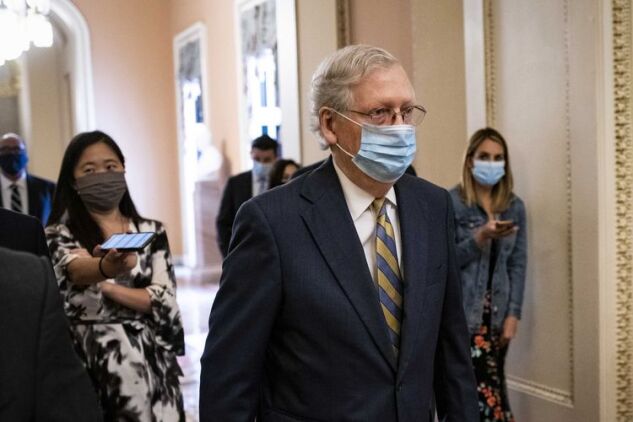 Mitch McConnell walks to the Senate floor at the U.S. Capitol in Washington, on July 23.
Photographer: Al Drago/Bloomberg

McConnell’s expected unveiling comes after top Trump administration officials, Treasury Secretary and White House Chief of Staff , spent much of the past week struggling to hammer out some of the differences with Republican lawmakers.

Meadows and Mnuchin were at the Capitol again Sunday to work on what Meadows said were the “final touches” of the package.

Even before the details are unveiled, Democrats dismissed the Republican plan as falling short of what the ailing economy needs. The House already passed a $3.5 trillion Democratic package that included $1 trillion in aid to states and local governments, much higher levels of school, childcare and health spending, and funds for food stamps, housing, elections, the and broadband internet.

The stark differences between the parties will make for tough talks that threaten to create a lag in benefits into August, and could delay implementation into September.

House Speaker has ruled out passing a temporary extension of the unemployment benefits during the negotiations, arguing that such a move would undermine her leverage in securing food stamp funding, a moratorium on evictions, and other provisions that Democrats deem necessary.

One of the major debates will be over unemployment insurance. Democrats want to continue the flat $600 a week supplemental payment, while Republicans are arguing for a system that would cap benefits at 70% of lost wages.

“Why don’t we just keep it simple: unemployment benefits, and the enhancement, which is so essential right now,” Pelosi said on CBS. “And that’s really where we are starting” in negotiations.

Senate Minority Leader on Monday morning also defended the enhanced benefit, arguing that not renewing it could hurt consumer spending.

McConnell hasn’t yet decided whether to advance any or all of the GOP stimulus proposals to the Senate floor, or take them immediately into talks with Democrats, said Senator of Missouri, a member of the GOP leadership team.

Negotiators may feel an urgency to act given the expiration of the supplemental unemployment program at a time when other stimulus measures also begin running dry. The lapses heighten the prospect of the economy being staggered as Election Day approaches.

“If we do hit the cliff and then people go without the certainty, that can be pretty motivational for us to get back to work next week and get something accomplished,” said Senator , a North Dakota Republican, said.