An explosion in nonfungible token sales this year has tax authorities scrambling to account for high-dollar cryptocurrency and blockchain technology transactions, and to craft rules that work both for national coffers and creators.

“There is huge value at stake,” said Julien Jarrige, a tax policy adviser at the Organization for Economic Cooperation and Development, which is asking countries to consider how to regulate and tax NFTs, and whether those policies should be similar or different from virtual currency.

NFTs are blockchain-backed digital assets that serve as a certificate of authenticity for both tangible goods (like a painting) and intangible goods (like a digital soccer trading card). The first one was created in 2014, three years before the term NFT was even in use, and their sales have generally been treated and taxed under traditional laws.

But there can be differences, and NFT sales are quickly becoming mainstream. NFTs generated about $10.7 billion in trading volume in the third quarter of 2021—a 700% increase from the previous quarter and 38,000% increase year-over-year, according to data from DappRadar, which tracks NFT sales across multiple blockchains.

Sales this year included the $4 million Doge meme and the $2.9 million digital image of the first Tweet.

“It’s a gold mine,” said Shaun Hunley, a U.S.-based tax attorney and senior specialist editor for Thomson Reuters Tax and Accounting. “Governments should really look into it.”

Most of the OECD’s 38 member countries apply existing classifications to emerging financial tools like cryptocurrency, according to a report last year co-written by Jarrige.

On the whole, this has worked well without requiring new categories or specific treatments, he said.

But the rapid expansion of the NFT market and the fact that NFTs can take on so many different forms—recording a transaction of tangible goods, creating value for a digital-only good, providing a license for services—create “novel challenges” for tax policy officials, said Michelle Harding, senior economist and head of the OECD tax data and statistical analysis unit, and the report’s other co-author.

And the people and companies creating, selling, investing in, and exchanging NFTs are looking for certainty that, first of all, what they are doing is legal, Jarrige said. Once that’s clear, the question becomes how countries treat and tax the industry.

NFTs can trigger multiple taxation events, Hunley explained. There’s a tax on the creator side and on the investor side. Investors would likely trigger two taxable events: when you buy it because you’re using cryptocurrency, which is a taxable event, and then when you sell the NFT later, that’s a taxable event. 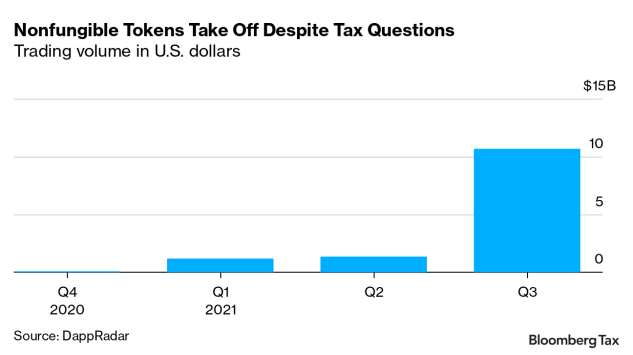 A few countries have already issued guidance on how their tax authorities will approach NFTs.

Australia is taking the approach described by the report—applying existing tax regimes to new technology. However, the guidance does not address digital-only goods, rather provides examples of NFTs that originate from a tangible work of art.

The U.K. was “a little bit behind the curve” in responding to the emergence of cryptocurrency, but there is now a full manual on taxation of cryptocurrency, said John McCaffery, a tax partner and head of tax at Alexander & Co in the U.K . That manual mentions NFTs just once and does not lay out explicit guidance on how they’d be taxed. But McCaffrey says Her Majesty’s Revenue and Customs’ approach to tokens is inclusive of NFTs.

South Korean lawmakers want to delay taxes on virtual asset transactions until 2023, but the status of NFTs is unclear. The government is reviewing whether NFTs should be taxed, the country’s Minister of Economy and Finance Hong Nam-ki told the National Assembly Oct. 6.

In the U.S., the Internal Revenue Service hasn’t issued guidance on the issue, Hunley said. The agency confirmed that it has “not opined specifically on NFTs.”

“We are aware of and closely monitor developments in the area of digital assets,” Bruce Friedland, a spokesman for the IRS, said in an email.

U.S. tax practitioners have to apply general tax principles in the absence of anything more specific, Hunley said. Tax professionals are relying on the IRS guidance on virtual currency, which is a digital asset, to infer some things from the general tax treatment of cryptocurrency and apply it to an NFT, also a digital asset, he said.

“The question then on tax pros mind is, ‘Does that really work? Is that realistic in our day and age with this new technology?,’” Hunley said.

A lack of guidance specifically on NFT’s doesn’t mean they aren’t taxable, but the nature of NFTs with the varying uses and characteristics may blur lines for taxpayers and tax authorities as to which type of NFT is which type of property, said Harding.

“The tax system needs to consider how to differentiate between NFT’s that merely record transactions or value in the real world to those that create it from nothing,” Harding said.

Christies auctioned a digital collage by the artist Beeple for $69 Million in March. Sorare, a French company that hosts blockchain-backed soccer trading cards, in September raised a $680 million Series B round—the biggest in Europe to date.

“These purely digital goods are a new category of goods whose existence is made possible by the NFTs, which make it possible to create originality and scarcity in digital goods that are in principle infinitely duplicable,” Alexandre Lourimi, a partner in corporate and tax law at ORWL Avocats in Paris, wrote in an email.

The French should consider creating a new legal category for purely digital assets and a dedicated tax regime for those assets, said Lourimi, who previously worked on corporate tax, VAT, and income tax issues as a justice assistant at the Versailles Administrative Court of Appeals.

Pierre Person, a member of the French National Assembly with a specialty in blockchain, cryptocurrency, and now NFTs, wants to create a stable environment for crypto-based companies to thrive in France, building on work his country did in 2019, he explained during a November interview at his Paris office.

France defined digital assets and created a specific regime for capital gains on digital assets: a flat tax rate of 30% that only applies when digital assets are sold for legal tender, meaning that exchanges between digital assets do not generate any taxation. There is no tax in France when an individual exchanges crypto-assets with each other, unlike in the U.S., according to Person’s office.

This 2019 law, while innovative compared to many other countries’ approaches to digital assets, creates legal uncertainty about the taxation of income from the transfer of an NFT because they represent both digital and tangible goods.

A member of the French Parliament’s finance committee, Person introduced an amendment this year to create a legal regime for NFTs as part of the budgetary process.

Government should tax NFTs as the property they represent in the blockchain whether the property is real or virtual, he said.

Person would create a specific legal regime for NFTs to tax the capital gain on NFTs according to the tax regime applicable to the underlying asset, similar to what Australia and the U.K. say is their approach. But he would also apply to NFTs the crypto-to-crypto tax exemption that France generally applies to digital assets.

The amendment was a procedural move to draw attention to the issue, rather than something that could become law this year, Person said.

“My main point was to tell my colleagues, ‘Open your mind on the subject. Work on the subject,’ because it’s a crucial point,” he said.

France and Europe generally missed out on the internet economy, Person said. He’s pushing his country to classify NFTs clearly to create certainty and encourage investment.

“We can’t reinvent things like Google. When it’s too late, it’s too late. We have to look forward to another technology,” Person said. “We will not have sovereignty, if we don’t innovate on our ground, in our country. And we must have our own company—a French or European company—if we want to provide for our sovereignty.”

—With assistance from Soo Bin Park.

To contact the reporter on this story: Shaun Courtney in Paris at correspondents@bloomberglaw.com