Chicago’s bold decision in 2016 to tax two features of the digital economy is reaping significant rewards, while the city’s more conventional tax programs languished during the pandemic.

Revenue from Chicago’s one-of-a-kind tax on cloud computing is about four times what it was five years ago, bringing in nearly $120 million last year, according to figures provided to Bloomberg Tax by the city’s Office of Budget and Management. The city’s tax on streaming entertainment has more than tripled over that period as consumers ramped up their subscriptions to services such as Netflix for video, PlayStation for gaming, and Spotify for music. The city collected more than $30 million in taxes on streaming services for the current year.

The two taxes are small slivers of the $1.5 billion in local taxes projected for the city during FY 2022, but a rare “bright spot” across Chicago’s menu of business, hotel, restaurant, recreation, phone and utility taxes, said Laurence Msall, president of the Civic Federation, a tax and fiscal policy think tank.

“Chicago’s unique approach using a lease transaction tax and amusement tax has allowed it to tap into streams of revenue that wouldn’t be accessible to a municipality when you consider the sales tax laws of Illinois,” Msall said. 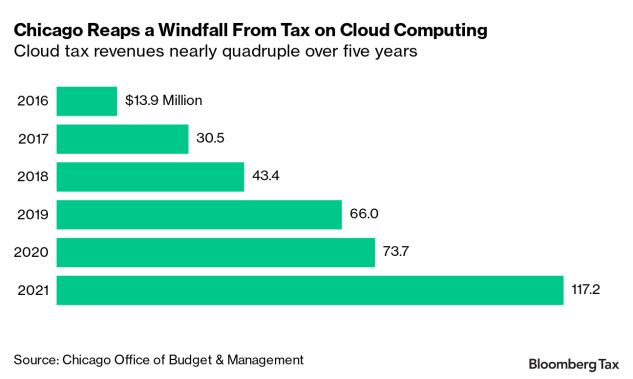 The Chicago Department of Finance startled many six years ago when it reinterpreted two long-standing tax programs. Under Ruling #12, the city expanded the Personal Property Lease Transaction Tax—previously imposed on automobiles, business equipment, and other leased items—to “nonpossessory computer leases.” The tax extends to a wide range of computing models including platform as a service (PaaS), infrastructure as a service (IaaS), and software as a service (SaaS).

At the same time, the department issued Amusement Tax Ruling #5. While the city had for many years applied the 9% tax to tickets for recreational activities and theatrical performances, the ruling extended the levy to “amusements that are delivered electronically.”

While a handful of states and localities around the country have extended their sales taxes to cloud computing and streaming, Illinois law doesn’t allow that application of sales taxes. Chicago used its substantial home rule authorities to find another way— through lease and amusement taxes. That makes it the only large municipality with this approach.

Creativity is paying dividends, according to data provided by Chicago’s Office of Budget & Management.

The Netflix tax netted $9.4 million in 2017, its first full year of service. Revenue climbed to $28.8 million in 2020. Collections for the year ending June 30, 2021 totaled $31.2 million. In total, 47 businesses are registered to collect and remit taxes on electronically delivered amusements.

Rose Tibayan, a spokeswoman for the city’s Office of Budget and Management, attributed the rapid growth to the two rate increases and climbing rates of compliance. In total, 1,098 businesses are remitting taxes on leases of cloud products.

Compliance with both taxes has accelerated due in part to Chicago’s active enforcement efforts and a recent statement on “economic nexus.”

In January the Finance Department issued a bulletin saying it expects out-of-state companies doing business in Chicago and meeting new economic presence, or nexus, standards to fully comply with the two taxes on a prospective basis, beginning July 1. The bulletin included a legal analysis of the tax programs in the context of the U.S. Supreme Court’s 2018 ruling in South Dakota v. Wayfair, which permitted states to impose tax collection obligations on remote retailers based on economic activity rather than physical presence.

The guidance also outlined a safe harbor for small businesses selling entertainment and computing services in Chicago. Businesses with less than $100,000 in revenue from Chicago customers during the previous year aren’t expected to comply.

“It’s too premature to forecast the full impact of the guidance, but the overall response has been positive and some businesses have, indeed, become more willing to come into compliance after reviewing the bulletin,” Tibayan said in an email.

Even as collections and compliance ramp higher, both tax programs remain controversial. The Netflix tax has been stung with litigation since it was first imposed.

In 2015 a libertarian legal advocacy group known as the Liberty Justice Center challenged the tax on constitutional grounds on behalf of Chicago users of Netflix, Hulu, and Spotify. The Entertainment Software Association filed a similar challenge in 2017, but later dropped the litigation. Chicago survived the Liberty Justice Center’s challenge, winning trial court and appeals court rulings. In March 2020 the Illinois Supreme Court declined to review the appeals court ruling, which found nothing improper in Chicago’s program.

Despite this precedent, tech giant Apple Inc. is pushing hard in a separate challenge to the Netflix tax in Cook County Circuit Court. The next hearing in the case is tentatively slated for December on Chicago’s petition for dismissal.

Sony Interactive Entertainment LLC, the gaming division of Sony Corp., objected to the tax on streaming services, claiming it lacked nexus with the city. The company ultimately surrendered and began collecting the tax in 2018. Sony also paid the city $1.2 million under the terms of a confidential settlement.

With respect to the cloud tax, Chicago has been particularly aggressive with its audits, initially focusing on vendors and later targeting consumers of cloud services, said David Hughes, a state and local tax partner with HMB Legal Counsel.

“This is not a function of the fact that we happen to be a Chicago law firm and we’re seeing so many Chicago lease transaction tax audits,” Hughes said. “I think the city is just being really aggressive in enforcing this. We’ve seen it in other jurisdictions, but not to this degree.”

Despite the economic nexus bulletin, significant questions remain about Chicago’s position on taxes and penalties for prior years. Those issues are frequently debated during audits and the city’s views are being applied inconsistently, said Samantha Breslow, a state and local tax associate at HMB.

“There is some question about whether a vendor with no physical presence in the city has or had an obligation to collect prior to July of this year and if they did, how far back does that collection obligation go,” she said.

Chicago’s deputy corporation counsel for tax Wes Hanscom said the “safe harbor” in the bulletin, waiving compliance for remote vendors with less than $100,000 in revenue from Chicago customers, resolved many of the concerns voiced by taxpayers in recent years.

(Adds updated revenue numbers to 11th paragraph and comments from Chicago's Office of Budget and Management to 17 paragraph. )