The America Invents Act, the law that overhauled the U.S. patent review system, has divided patent attorneys since it went into effect a decade ago.
Photographer: Andrew Harrer/Bloomberg

The law that overhauled the U.S. patent review system hits its 10-year anniversary this week with both backers and opponents saying that although the administrative board it created is likely to persist, there are ways to improve it.

Patent attorneys are sharply divided on the impact the America Invents Act has had on patent law.

Those who represent companies accused of infringement herald the law for providing an efficient, less expensive way to weed out low-quality patents. Those representing patent owners look back on the last 10 years very differently—the group US Inventor is calling it the “decade of stolen dreams.”

The law created the Patent Trial and Appeal Board, which has shown staying power after surviving seven Supreme Court challenges.

“I don’t think there is meaningful appetite out there for taking it down completely and going back to a pre-AIA system when it comes to post-grant proceedings,” Andrei Iancu, an Irell & Manella IP attorney who led the U.S. Patent and Trademark Office in the Trump administration, said.

Instead, attorneys representing accused infringers are finding ways to get the most out of the system.

For example, McDermott Will & Emery partner Sarah Chapin Columbia predicts a rise in post-grant review proceedings, particularly among competitors in the pharmaceutical and medical device fields. PGRs must be brought within a year of a patent issuing, but petitioners can attack the patent on a wider range of grounds than in IPR.

The act’s critics, meanwhile, look to Congress to provide more support for patent owners, such as providing more robust due process protection during agency proceedings.

Before the AIA was enacted Sept. 16, 2011, the U.S. awarded a patent to the applicant who could prove that he or she created the invention first. The act changed the system to a first-to-file rule to bring the U.S. in line with the rest of the world.

While that seemed like a monumental change at first, what gets the most attention now is the patent review procedures created by the act: inter partes review and post-grant review proceedings conducted by the PTAB.

How attorneys grade the AIA’s legacy has a lot to do with their views of the patent system.

Haynes and Boone LLP partner Joseph Matal, who drafted many of the major provisions of the AIA while working for the Senate Judiciary Committee, considers the act a success. He sees the act not as an abrupt change but the “just the latest phase in a 150-year-old discussion about allowing technical expertise to bear on questions of patent validity.”

Pre-AIA proceedings were amenable to abuse because parties could delay them strategically, Matal said. Statutory deadlines the act imposed on the PTAB have resolved those concerns, he said, pointing out that the board “virtually always” finishes reviews on time, and “overwhelmingly they’ve been upheld on appeal.”

As a result of efficient reliable access to expert review, parties are no longer pressured to settle when they are faced with infringement allegations, Matal said.

“Suddenly the value of your portfolio doesn’t depend on just the sheer number of patents you have, it depends on the quality of what you have, the value of the actual technical contribution,” he said.

George Mason University law professor Adam Mossoff, who opposed passage of the AIA, sees it differently. The AIA was a radical change to patent law, he said.

“The PTAB has fully brought the U.S. patent system within the modern administrative state with everything that that entails, including the substantial uncertainty and discretionary rulemaking that one sees in other agencies, undermining the stable and reliable property rights that have been traditionally historically secured to innovators in the U.S.,” Mossoff said.

For practitioners, the act has meant adjusting to the latest changes in how the new scheme is implemented.

Many patent lawyers shifted their whole careers to specialize in the new patent agency proceedings.

“It created an entirely new practice area for a lot of us,” Erika Arner, partner at Finnegan, Henderson, Farabow, Garrett & Dunner LLP, said. “It changed everything.”

Columbia said that accused infringers at first used IPR to take down “truly garbage patents.” Once those were weeded out, clients had to think twice about whether they were likely to prevail over a patent they were sued for infringing, she said.

“You may not kill it,” Columbia said. “And then you’ve spent a bunch of money and you’ve used up your powder, and you’re still facing that patent in district court litigation.”

Patent office statistics bear that trend out. In fiscal year 2013, the PTAB instituted 87% of the IPR petitions filed. That number has steadily declined, sitting at just 56% in fiscal year 2020. 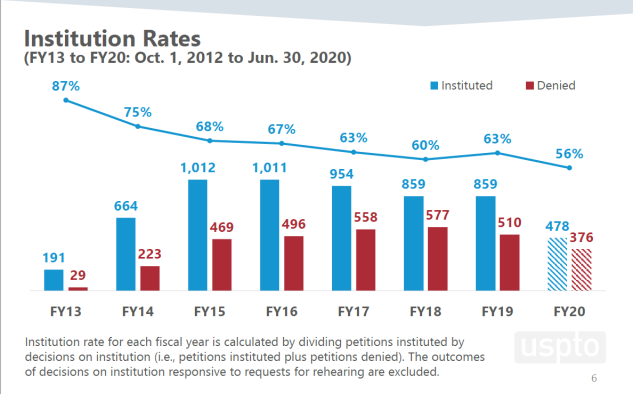 IPR institution rates have declined steadily in the decade since the PTAB was created. Source: USPTO website.

Practitioners have had to adjust to “a lot of pendulum swings in the last 10 years,” Natalie Alfaro Gonzales, a Baker Botts LLP partner, said. Defendants initially turned to IPR as an efficient way to challenge patents but a number of structural changes under Iancu swung the balance more in favor of patent owners, she said.

In particular, the rise of discretionary denial—where the board declines to institute an IPR to avoid redundant proceedings to a trial court litigation—has led to fewer IPRs being filed, Gonzales said.

Iancu said the reforms made while he was director were meant “to ensure we bring the process within its originally stated goals to have balance to allow for a true alternative that’s faster and less expensive, but at the same time not to allow for multiple bites in the apple.”

He believes further changes will also be incremental. The agency will continue to make tweaks to the law to balance the system to make sure it appropriately benefits both patent owners and petitioners, Iancu said.

Patent owners look to Congress hoping for legislation like the STRONGER Patents Act—which was introduced in 2019 but didn’t advance—to make significant changes to the patent process, Mossoff said. He wants more due process protections at the PTAB, like having different panels decide institution and validity, and prohibiting serial petitioning.

Matal envisions different changes to the law, such as adding eligibility and indefiniteness to the menu of challenges petitioners could make in IPR. Both invalidity grounds are decided on the papers and don’t require discovery, he said.

“It’s really just a question of the patent itself and specification and the case law,” Matal said. “It really makes sense to resolve things in an administrative proceeding.”